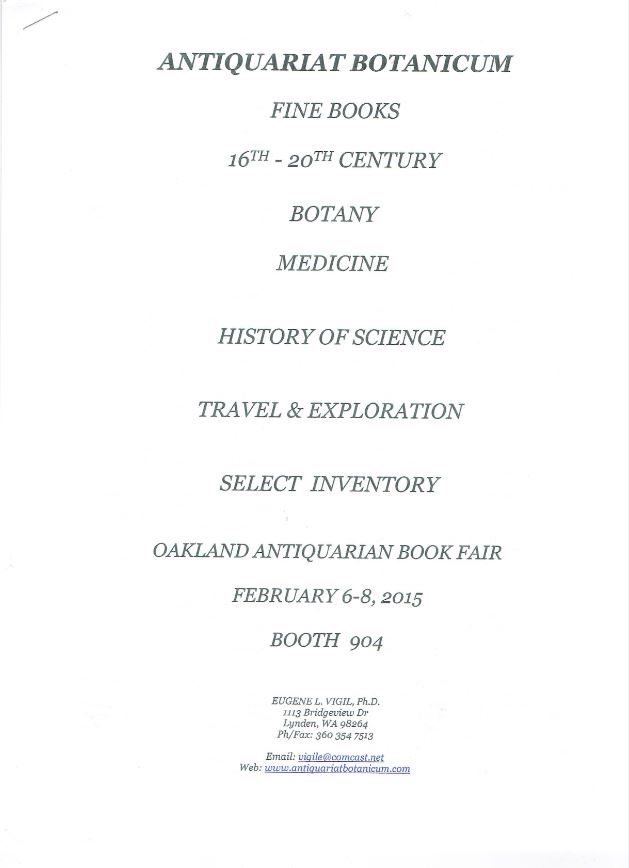 Antiquariat Botanicum recently issued a selection of books for the Antiquarian Book Fair in Oakland last month. Antiquariat Botanicum was formed in 1987 with a focus, naturally enough, on botanical literature. It remains a focus, but not the only one. The Lynden, Washington, bookseller has since expanded into other scientific fields as well as areas such as travel and exploration. Topics in this selection include botany, medicine, science, travel & exploration, mathematics, natural history, and miscellaneous. Much of the work is scholarly, and there are several items of manuscript notes by students in classes taught centuries ago. Note taking was treated far more seriously then than it is today. Here are a few examples of the material offered by Antiquariat Botanicum.

We start with a book that employed an exceptional printing process, but one little used as it was difficult and costly: The Octavo Nature-Printed Ferns. The author of this two-volume set published in 1859-1860 was Thomas Moore, curator of the Chelsea Botanic Garden. This was actually a revamped edition of the 1855 folio book The Ferns of Great Britain. It is not so much Moore's text as the nature-printed illustrations by Henry Bradbury that make this book notable. Nature printing is a process that uses actual specimens, usually plants, with ferns being ideal, as the source of the illustration. The specimen is placed between two metal plates, one of soft lead, the other of a harder metal like steel. It leaves an impression in the lead plate which possesses a three-dimensional effect. Bradbury was the son of William Bradbury of the book's publisher, Bradbury and Evans. He had studied the nature-printing process in Vienna developed by Alois Auer, which he perfected and brought back to England. He did not give Auer credit, which led to a dispute. Bradbury became despondent and committed suicide in 1860, hence there is not a lot of work from his career. Priced at $1,250.

While Bradbury and Auer raised nature printing to a sophisticated level, they certainly weren't the first to print an image directly from a specimen. This next book is Species Insectorum, by the noted 18th century entomologist Johann Christian Fabricius. Fabricius studied under Linnaeus, the father of classification of plants and animals. Fabricius followed in his footsteps, except that his focus was on insects. He named around 10,000 of them. His delineations are the basis of modern insect classifications, even if most of his names are no longer used. This book describes 328 species of insects in detail. This copy of Fabricius' 1781 book is unique as it contains original drawings in the margins of volume 1. The book itself was unillustrated, but original illustrations in pen and ink of some of the species described were drawn in the margins. The second volume includes added nature prints of butterfly and moth wings. These were mounted on stiff paper and glued to the margins opposite the described species. $5,000.

Next up we have one of the earliest English language treatises on the heart: Observations on Some of the Most Frequent and Important Diseases of the Heart... by Allan Burns, published in 1809. Burns, oddly, did not go to medical school but was recognized as a physician as he assisted his brother, who was so trained. Burns studied the literature carefully and was an expert on dissection, so he became quite expert on the heart. His understanding was well ahead of his time, and he contributed much to the learning of the day. However, the science of healing was primitive then, and so while Burns recognized many diseases and problems with the physical structure, he was not able to come up with many cures. Serious heart surgery was still a long ways away. So, he followed some of the traditional remedies of the day, such as bleeding and chemicals we now know to be unhelpful if not downright dangerous. However, he did recommend some important preventatives. For one, he saw diet as important, believing that for the most part, treatment was useless so prevention was critical. Burns was also a believer in resuscitation, including forcing air into the lungs, which he found worked once in awhile. $950.

Here is an important American botanical work, written by a German immigrant, Frederick Pursh: Flora Americae Septentrionalis; Or A Systematic Arrangement and Description of The Plants of North America... This is the scarce second edition published in 1816. This was the first North American flora to include a description of plants brought back from the Lewis and Clark Expedition to the American Northwest. It is not clear why the specimens were entrusted to Pursh, whether that was the intention or whether they were meant for the better known Benjamin Barton under whom he had studied. Whatever the intentions, Lewis died before anything was published about the botanical specimens and a few years later Pursh produced his work. $5,500.

Next we have the final edition (1902) of Alfred Russel Wallace's Island Life, published in 1902 (first published in 1880). It was a sequel to his earlier work on the geographic distribution of animals, in this work looking at species found isolated on various islands. Wallace was the co-developer, though not nearly so celebrated, with Charles Darwin on the theory of evolution. Wallace and Darwin had independently come to similar conclusions, and their theory was first published in a joint article. In this book, Wallace explains geographic distribution of animals on certain islands and the effects of evolution on them. This copy comes with three letters Wallace wrote in 1901 to Dr. William Eagle Clarke, a British ornithologist concerning identified bird species in the Philippines for this updated edition of Island Life. $9,500.

Antiquariat Botanicum can be reached at 360-354-7513 or vigile@comcast.net. Their website is www.antiquariatbotanicum.com.