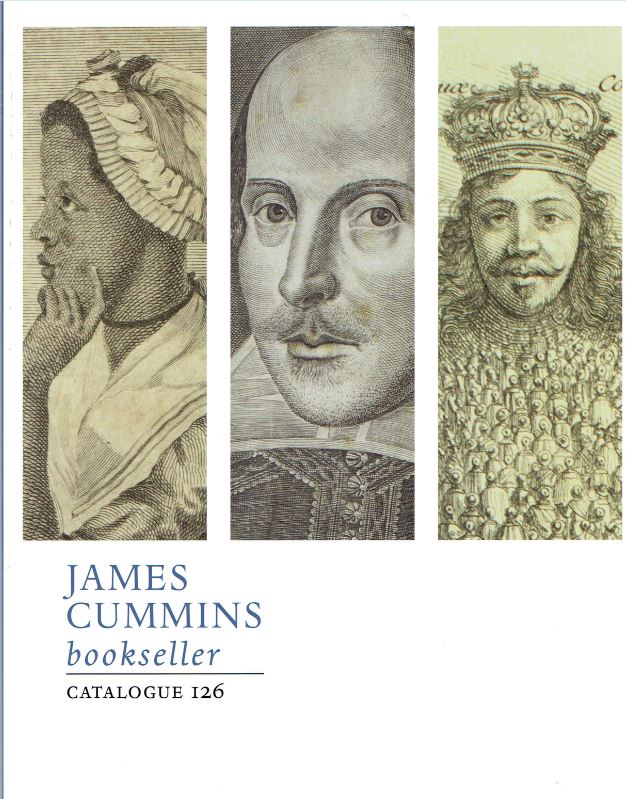 James Cummins Bookseller has released Catalogue 126. The items are varied, a mix of books, letters and documents from people who wrote books, and some things that fit none of those spheres. We can only provide a few samples. To understand the rest you will need the catalogue.

We will start with an important rarity with a rich provenance... a very rich provenance. Item 59 is Mr. William Shakespear's Comedies, Histories, and Tragedies...And unto this Impression is added seven Playes, never before Printed in Folio. This edition is generally referred to as the Third Folio, the second issue. The 1664 Third Folio was a reprint of the second, but this rare second issue added the seven new plays mentioned in the title. These plays had been printed under Shakespeare's name during his lifetime, but it is now believed only one, Pericles Prince of Tyre, was written by Shakespeare. The Third Folio is rarer than the second or fourth, likely because copies were destroyed in the Great London Fire of 1666. This copy contains the armorial bookplate of the great collector and fabulously wealthy turn of the century industrialist J. Pierpont Morgan. Priced at $500,000.

Here is another book with an important provenance, though this time the significance is not the wealth or fame of the owner, but his annotations and relation to the events discussed. The book is Winston Churchill's The World Crisis. 1911-1914, the First Lord of the Admiralty's (during those years) account of the run-up to the First World War. It was published in 1923. The copy is inscribed by Churchill to Count Metternich, who was German Ambassador to Britain from 1901-1912. Metternich has annotated the book throughout in English with his views and corrections. Naturally enough, his opinion at times differ with those of Churchill, the two representing wartime enemies once the fighting began. Metternich contends that Germany was forced into the war, at one time writing, “But after all, did Germany attack England? I thought it was vice versa.” Metternich disagrees with Churchill's contention that England was trying to ease conflicts between Germany and France, maintaining instead that England was firmly on France's side and unwilling to give Germany a fair deal. Metternich also recounts a meeting with an ailing Bismarck in the last year of the latter's life (1898). Bismarck maintained that England was not much of a threat as it had become fat. Metternich writes that he could not verbally contradict the great leader, but his experiences in England taught him that despite the “fat,” there was still great energy in England. Item 10. $30,000.

Here is one more book with an interesting connection. In 1881, Oscar Wilde published his collection of Poems. The book was well-received, helping to secure the reputation that would enable him to become a popular speaker in the years before he was known as a prose writer. This is a copy of the true first edition. The first printing consisted of 750 copies, divided into groups of 250, three editions almost (but not quite) indistinguishable. This copy was owned by Edward Heron Allen. Heron Allen was a writer and friend of both Wilde and his wife. In 1900, he wrote in the book that it was “Given to me by Constance Wilde in November 1885.” Wilde married Constance Lloyd in 1884, and their two children were born during the next two years. Presumably, these were their best years. Wilde would go on to spend much time away from home, and later become involved in a homosexual scandal. He and Constance would remain married for the rest of her life (she died in 1898), and they were apparently civil to one another, but were apart for many years. Item 76. $3,750.

Back in the 17th century, when people were holding witch trials and the like, there were a lot of superstitious beliefs. Yet even then, there were a few who recognized the nonsense and were willing to point it out. Item 4 is a book that pointed out the fallacies of a lot of these beliefs: Pseudodoxia Epidemica: or, Enquiries into Very many received Tenants, And commonly presumed Truths, by Thomas Browne, published in 1646. Browne tackles all sorts of false beliefs, including those of science, religion, and medicine. Among scientific errors discussed are the belief that salamanders can live in flames, and hares are each of both sexes. Medical issues involved the saying of a blessing after a sneeze, and that drowned men float on the ninth day. From religion, he discusses the belief that the Tower of Babel was built to withstand a second flood. He also points to the error of paintings of Adam and Eve, which show them as having navels. How silly is that for the first humans? $1,000.

This next item is a printed work, though hardly a book. It is sort of a “first edition” of the game of Monopoly. It is the first fully printed version of the game, the “white box” one put out by its inventor, Charles Darrow. It shows a 1933 copyright with printed “1934 rules” inside. Darrow copyrighted his new game in 1933 and began selling it in the white box at Wannamaker's Department Store in Philadelphia the following year. In 1935, he sold the rights to Parker Brothers, which rolled it out to great success across the country. The board and parts are in near fine condition, including 32 green houses, 12 red hotels, 16 Chance and 16 Community Chest cards, 2 dice, 28 property cards, and cash in denominations from $1 to $500. The iconic game pieces are lacking as they had not yet been developed. The board looks amazingly like the one we all grew up with except some of the property color schemes are different. For example, the Pennsylvania Avenue set is a pink orange, not green, Baltic red (like Illinois), not purple. Item 40. $7,500.