The Presidents from Bauman Rare Books 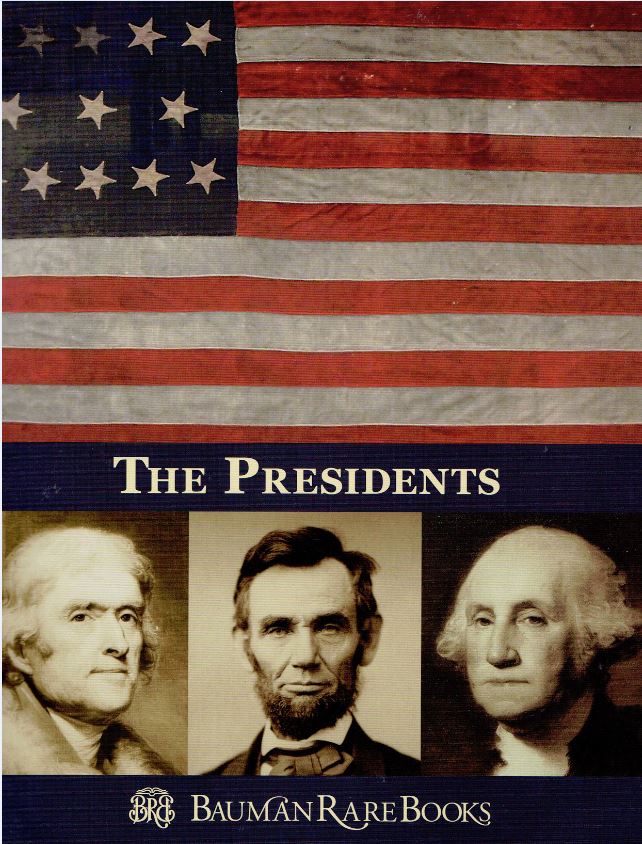 Bauman Rare Books has issued a catalogue entitled The Presidents. Offered is a collection of books, manuscripts, and ephemeral items related to the Presidents of the United States. They range from personal letters to photographs, documents, and books once owned by these American leaders. Most pertain to the more noted of leaders - Washington, Lincoln, the Adamses and Roosevelts - but Garfield, Coolidge, Arthur, Buchanan and the Harrisons also make their appearances. They range from the first President to the most recent, and include all political parties that reached the top along the way. Here are a few samples.

We will start with the president who was first in war, first in peace, and first in the hearts of his countrymen, so quite logically he should be first in this review. It is a presentation document signed by the farmer and retired president, George Washington. Dated June 24, 1799 (roughly six months before he died), Washington authorizes a payment of $500 for 187 ½ barrels of Indian corn. This order was not a result of Washington being particularly fond of vegetables, or being in the corn syrup or corn oil business. This corn was headed to the Mount Vernon distillery, for a more spirited use. The former President's signed acknowledgment is on the verso of a document also signed by his nephew, William Augustine Washington. William would later send a check for the amount on behalf of his uncle. Item 1. Priced at $20,000.

Item 50 is President Theodore Roosevelt's fourth annual Message of the President of the United States, Communicated to the Two Houses of Congress, from 1904. It introduced a major new principle, known as the Roosevelt Corollary to the Monroe Doctrine, which has often led to strained relations between the United States and its Latin American neighbors. Roosevelt's intentions were good, seeking to protect the nation's neighbors, but such assistance has often been considered meddling rather than help. The Monroe Doctrine had declared the Americas off limits to interference by the European powers. However, in Roosevelt's opinion, this created a void in cases where these nations needed the protection of a “civilized” nation. The result was that this made it the United States' responsibility to intervene where circumstances warranted. Writes Roosevelt, “Chronic wrongdoing may in America, as elsewhere, ultimately require intervention by some civilized nation, and in the Western Hemisphere the adherence of the United States to the Monroe Doctrine may force the United States, however reluctantly, in flagrant cases of such wrongdoing or impotence, to the exercise of an international police power.” It has been noted that this corollary effectively turned the Monroe Doctrine from being an isolationist principle to one of interventionism. $6,000.

Of all the photographs that have ever been taken of U.S. presidents, there is probably no more iconic or instantly recognizable picture than this one. Item 80 is a framed, inscribed photograph of President Harry Truman. It is the one of him holding up a copy of the Chicago Daily Tribune with the bold headline, “Dewey Defeats Truman.” In 1948, during the days before serious polling, New York Governor Thomas E. Dewey was expected to handily defeat President Truman in his election bid. As the Daily Tribune ran up against its deadline, returns were still scattered. The paper was pro-Dewey, and was aware of what most people expected the returns would show. Rather than being cautious and beaten to the punch by its competition, it went ahead with a claim it was sure was right. Never assume too much. The headline has since been engrained in the public consciousness as a great joke, aided by the victorious Truman smiling as he held up the newspaper. He has inscribed this photograph to its recipient “with happy memories.” $12,500.

Item 37 is a folio album published in 1886 containing 140 mounted prints. It commemorates a spectacular, though sad event: Seven Mile Funeral Cortege of Genl. Grant in New York Aug. 8, 1885. While Grant's presidency was not as successful as his command of Union troops during the Civil War, he was nonetheless a beloved figure in America when he passed on. Crowds packed the route of Grant's funeral procession along the streets of New York. Three U. S. presidents attended. Pallbearers included Grant's fellow Civil War Generals William Tecumseh Sherman and Philip Sheridan. Amazingly, they also included Confederate Generals Joseph Johnston and Simon Bolivar Buckner. If there is any doubt, these pictures should resolve any question as to who is buried in Grant's tomb. $23,000.

Item 93 is a New Year's greeting card signed by President John F. Kennedy and Mrs. Kennedy. It is rare and eerie. It is greetings for the year 1964. Kennedy was assassinated on November 22, 1963, this being one of what appears to be a very few he signed early. A group of cards was received at the White House while Kennedy was visiting Florida that November. He returned to Washington late on November 18, and left for Texas on the morning of November 21. That means that this card must have been signed on either November 19 or November 20. Bauman is aware of five cards with greetings for Christmas and New Years that Kennedy signed, but this is the only one they have seen with New Years greetings only. $25,000.

Item 96 is an amazing archive of material pertaining to President Ronald Reagan, covering 50 years. The collector was Zelda Multz. A young Miss Multz first wrote to the fledgling Ronald Reagan Fan Club in 1944. Reagan was a visible actor, though consigned to lesser movies. She received a signed membership card (included in this archive). Thrilled by such a personal response, she wrote him again. Thus continued a practically life-long correspondence. Miss Multz became President of Reagan's fan club, and continued to correspond as he entered politics, became Governor of California, and eventually U. S. President. The archive contains 131 letters from Reagan, others from Nancy Reagan, Nelle Reagan (his mother), and even first wife Jane Wyman. A very personal letter from Reagan speaks of his attempts to salvage that marriage as it was breaking up. There are also over 300 photographs, most unpublished, printed material, and other items, particularly from his Hollywood years. We also see some of his political evolution spelled out as he became more conservative, including a defense of Barry Goldwater. $265,000.