Crucible of War: America from 1757-1792 from the William Reese Company 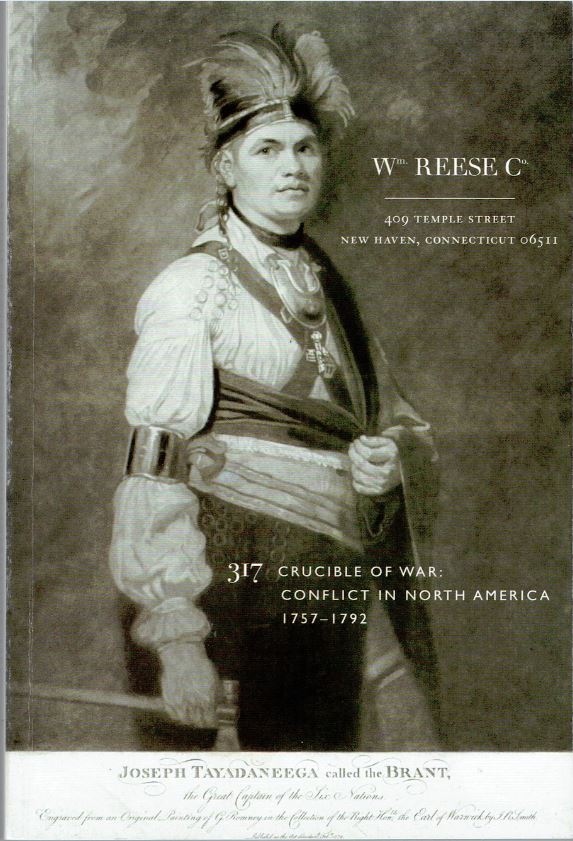 Thayendenegea, or Joseph Brant, on cover of Reese catalogue 317.

The William Reese Company has prepared a catalogue entitled Crucible of War: Conflict in North America 1757-1792. It takes the continent from its first major entanglement in the ceaseless European rivalries, the French and Indian War, through the American Revolution and the new United States' early days as an independent, constitutional republic. The changes were breathtaking. It starts with the colonists south of the Canadian border allied with the British against the French. Two decades later, that alignment would be reversed. Meanwhile, Canada, once the bastion of French power on the continent, would become Britain's closest ally. Finally, by 1792, America would become wary of both European powers, as it attempted to chart its future free from the European entanglements that inevitably lead to war over concerns of little relevance to those in the western hemisphere. Here are a few of the many items Reese is offering pertaining to this volatile period of American history.

We will start with the portrait that graces the cover of this catalogue. It is that of Joseph Tayadaneega (Thayendenegea), or Brant, as painted by George Romney, engraved by John Raphael Smith. Brant, to use his English name, was a leader of the Mohawks, and the most notable leader of the Iroquois confederation of upstate New York at the time of the American Revolution. Unfortunately, he picked the wrong side. He had been educated by and taken under the wing of the British during colonial days, leading to his loyalty to the crown when the colonists revolted. He led most, though not all of the Iroquois tribes against the Americans in what was still the frontier region. After the war, he moved to Canada, but continued to play the European and American powers against each other to extract whatever concessions he could for his people, while developing a large farm and prosperous western lifestyle on his own behalf. He met with both George Washington and King George during his various negotiations over the years. Romney's portrait is appropriate for the Indian leader as he wears a combination of native and European dress. Item 114. Priced at $45,000.

Item 7 is a broadside of Two favorite Songs, Made on the Evacuation of the Town of Boston, by the British Troops, on the 17th of March, 1776. The songs ridicule the British who had just evacuated Boston for safe harbor in Nova Scotia. One recounts the British “victory” in the Battle of Bunker Hill the previous year in the early days of the Siege of Boston. After twice unsuccessfully trying to drive the rebels from Bunker and Breed's Hill, the British finally succeeded when the colonists ran out of ammunition. However, by that time, the British had endured enormous casualties, the worst they would endure during the entire Revolution. The result was that they would not make another serious attempt to drive the rebels from the surrounding territory, allowing them to control land access to Boston. The second song celebrates the British evacuation, when their leaders concluded it was no longer worthwhile to attempt to control Boston. The tone of the songs is mocking, with the latter speculating as to where the British had gone, likely either Halifax (correct), or New York. $17,500.

Item 73 is a copy of the rare, privately printed first edition of Thomas Jefferson's Notes on the State of Virginia. Printed in Paris, it is dated 1782, though actually printed in 1785. In 1781, Jefferson was sent a series of questions about his home state by a French diplomat. He responded with a series of answers, which he later expanded into this book. It was Jefferson's only book length writing published during his lifetime. In it, he provides great detail about Virginia, its natural history, people (including Indians), agriculture, climate, and much more. He also talks about its government, revealing Jefferson's deepest political beliefs. He printed 200 copies, but none were offered for sale. They were distributed among friends. This copy was given to David Franks, an American diplomat in Paris on February 7, 1787. $325,000.

The next item is a great rarity, famed as the first book printed in the Confederacy. Wait a minute! The time frame for this catalogue is 1757-1792. At its most generous interpretation, the Confederacy did not begin until 1860. The book is The Narrative of Colonel David Fanning. (A Tory in the Revolutionary War with Great Britain), written by the loyalist, but not published until 1861, long after his death in 1825. Why was this autobiographical account selected to be published in the Confederacy? After all, though Fanning was virulently against what became the Union, the Preface's writer describes him as a “cold blooded murderer.” He is not at all a sympathetic character. The answer is that rather than seeing Fanning as being anti-Union, like the Confederates, the publisher saw Fanning as the defender of the old guard against those, like the Confederates, who saw themselves as rebels against tyranny. In Fanning, they saw the current day's Union soldier, whom they regarded as cruel and brutal. As for Fanning himself, born in Virginia, he operated through the Revolutionary War mostly in North Carolina. Captured several times, he always managed to escape or be pardoned. After Britain lost the war, he hightailed off to Canada where he spent the remainder of his days. Item 49. $15,000.

Here is another Civil War-era book with a tie back to the American Revolution, but this one was designed for a very different purpose – to support the Union. Item 66 is The Last Men of the Revolution. A photograph of Each From Life... by Rev. Elias B. Hillard, published in 1864. Hillard was able to locate six Revolutionary War veterans still living to interview and photograph. One more veteran got a short biography though he could not be located. He was presumed alive because no notice of his death could be found. Rev. Hillard was moved to produce his book at this time in an attempt to rekindle patriotic, pro-American spirit among those whose sympathies for the united nation were less than certain. However, with the Revolution now over 80 years in the past, and any surviving participants having to be near or over 100, he did not have many prospects with which to work. One of the six was Lemuel Cook, the last verifiable survivor who fought in the Revolution. Cook died in 1866 at the age of 107. $7,500.