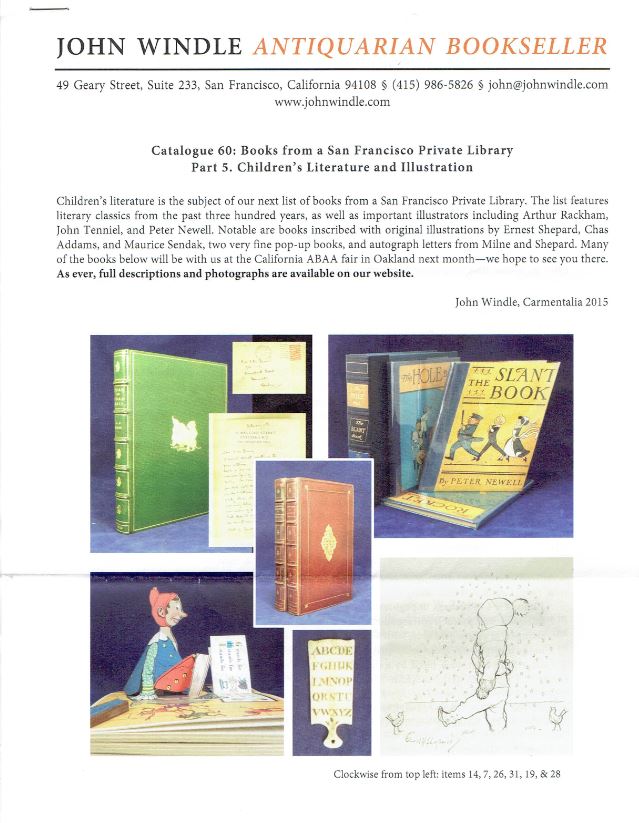 John Windle Antiquarian Bookseller has issued the fifth part of a catalogue from a private collection: Catalogue 60: Books from a San Francisco Private Library Part 5. Children's Literature and Illustration. This collector built a library covering many subjects, with the common thread being collecting at a high level. These are all important books in the field, many of which come with signatures or inscriptions. Here are a few of them.

Shiver me timbers! Here is the book that turned pirates from being the ISIS of the seas to popular storybook characters. Item 32 is a first edition, first issue of Robert Louis Stevenson's tale Treasure Island. It made treasure hunting popular too, which is much nicer than dealing with pirates. Windle describes this as a “fine copy,” worthy of a treasure hunt. Published in 1883. $9,500.

Next is an anthology of cartoons about a family like yours or mine: Addams and Evil. Okay, maybe the Addams family was just a little more special than ours. This is the second anthology of Charles Addams' cartoons about his (we hope) fictional family. His cartoons became a hit in the New Yorker, famous for its cartoons, around 1940. His ghoulish looking family would later become the stars of a hit television series and several movies. Addams has inscribed this 1947 first edition of his book to Daise Terry. She was an office manager at the New Yorker who was an early advocate for Addams' work. He has drawn an original watercolor in the book of Lurch, the family's tall, zombie-looking butler. Item 1. $3,750.

Here is another extra illustrated book by its author. Item 30 is a later edition of Where The Wild Things Are, the most famous book by author/illustrator Maurice Sendak. Sendak has added an extra drawing of a wild thing as well as signing and inscribing the book. The recipient was Charles Mikolaycak, an illustrator of over 60 children's books who received several awards for his work. $5,000.

Item 14 is Toad of Toad Hall, A. A. Milne's dramatization of a part of Kenneth Grahame's The Wind in the Willows. It was published in 1929 (21 years after Willows) in a limited edition of 200 copies. This is number 7. It was printed on handmade paper and is signed by both Grahame and Milne. It is accompanied by a letter to Helen Brown, of Mole End, Heswall, Cheshire, dated 1923. Milne is amused at Miss Brown's naming of her home “Mole End,” as that was the name Grahame gave the home of one of his characters, the mole, quite naturally. Milne writes, “If ever we have a house in the country we are going to call it Toad Hall.” He goes on to write, “You may like to know that I am making a play of it [The Wind in the Willows]. Mole End doesn't come into it. (Do you mind very much?) It was that or Badger's House, and I had to have Badger's. I am sorry about Mole End, because my wife and I love the chapter more than any...” $6,950.

Item 34 is Travels into Several Remote Nations of the World. In Four Parts. By Lemuel Gullivar... Of course, it was not written by Lemuel Gullivar. Gullivar was created from the imagination of the actual author, Jonathan Swift. The book today is more familiarly known simply as Gulliver's Travels. Swift's world of strange people, giants and tiny creatures and more, has been copied by several very popular writers of the last century. It is interesting that Swift was not out to create a children's adventure like those that came later. He was actually writing political satire, though most of his points are now obscure or forgotten. The story, however, endured. This is a copy of the 1726 true first edition with all first issue points, including all of the maps and travel plans, and (as usual) the second state portrait of Gulliver. The copy contains the armorial bookplate of Thomas Macro, University Librarian at Cambridge. He died in 1743 or 4 and may well have been the original buyer. $65,000.

Item 6 is a first edition of Mark Twain's Huckleberry Finn, published in 1884. The first was published in London, a few weeks ahead of the American edition. Twain did this to be certain he had a valid local copyright so that his books could not be pirated in England. This copy is bound with staples, unlike most which used string. There is no known priority. The experiment with staples didn't work out so well, but this one is in “desirable condition.” $2,500.