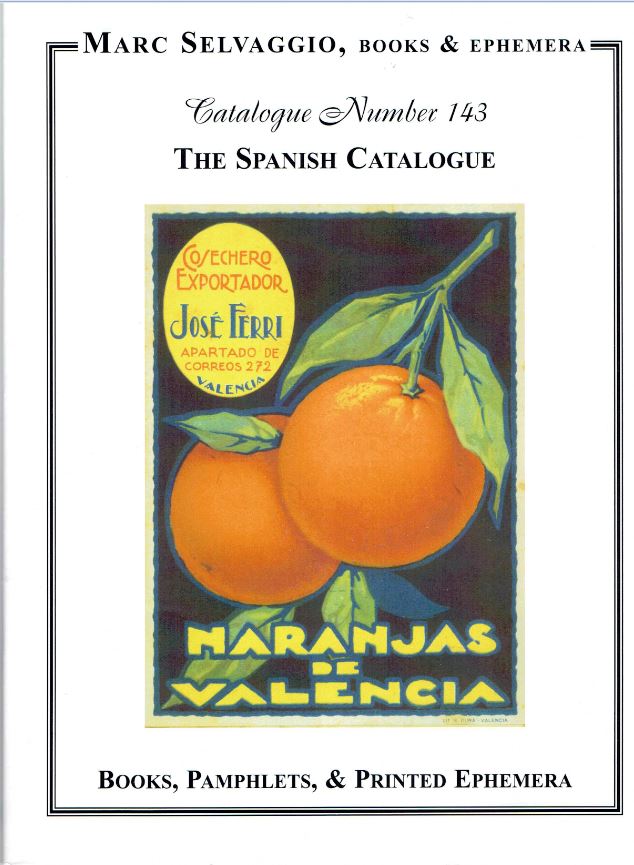 Marc Selvaggio, Books & Ephemera has released their 143rd catalogue, The Spanish Catalogue. Books, Pamphlets, & Printed Ephemera. Unlike what we usually expect from an American bookseller offering “Spanish” works, most of these items actually relate to Spain, not Latin America. Except for the final section of miscellaneous items, which include many from south of the U.S. border, the overwhelming majority of items pertain to Spain.

The catalogue is divided into seven sections: Advertising, Business, Commerce, Etc.; Trade Catalogues; Health & Medicine; Women's Culture - Beauty, Domestic Arts, Etc.; Art, Music, Amusements; Spanish Civil War (and Postwar); Primarily Miscellaneous. The majority of the items are from the first half of the 20th century, though some are older, a few more recent. These are a few selections from the over 350 items offered in this latest catalogue.

We begin with a memento from the first around the world flight by the Graf Zeppelin, the great German hydrogen-filled rigid airship: La primera vuelta al mundo en el “Gran Zeppelin,” 15 Agosto – 4 Septiembre 1929, published in 1930. Why a Spanish account of the great flight by a German airship, you may wonder. The answer is that among the only 20 passengers permitted to participate in this historic flight was Dr. Jeronimo Megias, the personal physician of Spanish King Alfonso XIII. The flight officially began and ended in Lakehurst, New Jersey, a requirement of American newspaper publisher William Randolph Hearst, who secured exclusive media rights in return for financing much of the expense of the flight. The flight took the Zeppelin back across the Atlantic to its home base in Friedrichshafen, Germany, then across thousands of miles of Russia, to Tokyo, then across the Pacific to Los Angeles, and finally, across America back to Lakehurst. Germans considered the around the world flight to consist of the time from its landing at Friedrichshafen to its later return there. The American leg included four representatives of Hearst's newspapers, a couple of representatives of the U.S. Navy, and wealthy socialite William B Leeds, whose father acquired a fortune selling his tin plate business to J. Pierpont Morgan's U.S. Steel. The trip took 21 days including stops, 12 ½ days in the air. Dr. Megias' account is filled with photographs and includes a fold-out map of the route. It also names the 41 crewmen and 20 passengers. Photographs include numerous images of passengers and crew at various locales, with one of the Captain playing his accordion as the ship drifted over the vast expanses of Siberia. This copy is inscribed by the author, evidently to his sweetheart. Item 19. Priced at $250.

Item 70 takes us back to the earliest days of the telephone in Spain: Memoria Descriptiva de Una Red Telefonica con Destino al Servicio Publico Proyectada por la Sociedad... published in 1883. This is a descriptive report for a planned telephone service that was published by the Sociedad Espanola de Electricadad, a company formed just two years earlier to provide another new service – electricity. Director-General of the company Tomas Dalmau discusses the current state of telephone service in Spain (very limited) and their plans for producing a consolidated central system. $50.

For those wishing to learn French, Fonobilingue Cots had the answer in 1922. Item 4 is El saber no ocupa lugar or El que aprende puede llegar. This is the story of Don Braulio who visits Fonobilingue Cots shop and purchases their portable phonograph player and French language records. He buys them for his son, but soon the whole family is leaning French, on the train, at the beach, wherever they go. Eventually, they all learn French and become financially successful as a result (I learned French in high school without similar results). If it's annoying to listen to people talk on their cell phones on a train, what must it have been like to listen to these records? My grandfather had a record player built around this time, a huge wind-up contraption I cannot imagine taking on a train or to the beach. This could not have been particularly portable by current standards. $75.

Perhaps if Don Braulio and his family got tired of hearing the French records, they could have purchased these next two, 78 rpm records released in 1939 by Musikkorps des Inf. - Lehr-Regiments. This was a German military band whose martial music honored Franco and his fascist Nationalists. The “A” side for one is Arriba Espana, the other Saludo a Franco, Marcha Militar. Items 261 and 262, $45 each.

Item 131 consists of a collection of 17 lithographs with promotional text on the verso for La Passiflorine, circa 1930. This was a medicine made from the passion flower which cured all types of ailments, or at least so the manufacturer claimed. The series used caricatures of various famous literary and artistic figures, such as Cervantes, Maupassant, and Wagner, with quotes pertaining to the afflictions the medicine cured. Manufacturer Boizot would then add some additional comments linking the quotes to the medicine. This was not exactly an endorsement by these people of the product, although readers were free to infer whatever they liked. $250.

Item 355 is a Scrapbook of travels in Spain, a personal album of photographs, postcards, and miscellaneous printed pieces compiled in the summer of 1930 by a visitor from Bellingham, Washington. It was put together by Evelyn Hagen, a young woman who traveled to Spain with another young lady, apparently to study language in Madrid. After stops in England and Paris, they arrived in Madrid, where we find many photographs of the young ladies, their Spanish friends, and the sights. They visited to Sevilla, to see the exposition taking place there, Barcelona, Cordoba and Grenada. It comes with an eight-page manuscript of Spanish recipes received from a friend in California. $150.