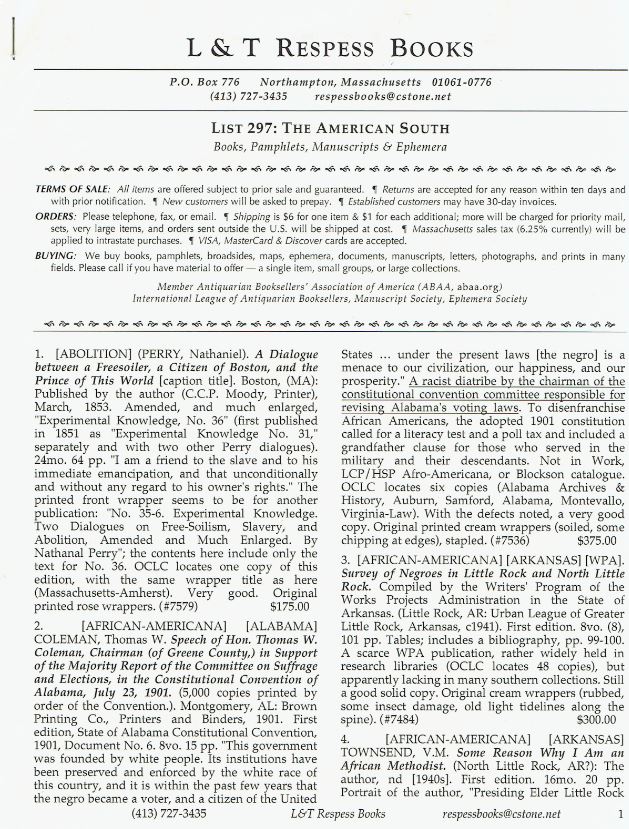 L & T Respess Books has issued a catalogue entitled The American South. Books, Pamphlets, Manuscripts & Ephemera. This may not be a subject expected from a Massachusetts bookseller, but Respess has managed to come up with a surprising collection of material from a part of the country so different and far removed. Most of the material is from the 19th century, but there are numerous items from the 18th century and first half of the 20th as well. One might expect a collection focused on the South to contain material related to the issue that divided that part of the country from its North – slavery, rebellion, Reconstruction, and race relations. Certainly there are items pertaining to this confounding issue, but that is a minority. Many other topics are covered, with much of the material focused on personal concerns, promotions for southern communities by land developers or railroads seeking tourists, maps, religious beliefs and conflicts, music, and other issues concerning every day life. Here are a few samples from down south.

Almost 30 years prior to seceding from the Union, and leading the rest of the South into rebellion, South Carolina attempted to do almost the same, declaring that it was not subject to federal laws it did not wish to follow. The issue at that time was not slavery, but tariffs. The state adopted the concept of nullification, the right of a state to be independent of federal authority when it so chose. The President of the United States, Andrew Jackson, did not see it that way. While later Presidents would attempt to be accommodating and compromising toward threats of secession, Jackson responded with threats of force. Though providing some tariff relief to southern states, Jackson made it quite clear he would never give in. Item 105 is a New York printing of a broadside Proclamation By Andrew Jackson, President of the United States. Promulgated December 10, 1832. It is signed in type by Jackson and Secretary of State Edward Livingston. Jackson notes that a South Carolina convention had passed an ordinance saying that the tariff was unconstitutional and therefore null and void, making it “proper” for him to proclaim his own view on the subject. In effect, Jackson says, “no way.” He declares such action to be treason, and makes it clear he will use military force if necessary to enforce the laws of the United States. Priced at $1,750.

Three decades later, South Carolina would go a step further, declaring itself no longer part of the United States. Item 59 is its Declaration of the Immediate Causes which Induce and Justify the Secession of South Carolina from the Federal Union; and the Ordinance of Secession, passed at the end of 1860 (and here printed in 1861). After a decade of accommodation and soft responses from Washington, South Carolina made its move during the waning days of administration of James Buchanan, who had nowhere near the backbone of Jackson. By the time Lincoln was inaugurated, half of the South had seceded. In its Declaration, the South Carolina Convention claimed that states had the implicit right under the Constitution to secede, and since other states had not, in their opinion, kept their part of the bargain, by working to prohibit slavery and not enforcing the Fugitive Slave Law, it was free to secede. $2,500.

Florida was a lightly populated state at the time of the Civil War, and it would still be many years before large numbers of people from the North and Midwest would migrate south, seeking warmer weather and new opportunities or retirement ease. However, by the later years of the 19th century, land promoters were enticing people from the North to come south, and the population began to grow. Item 76 is Living in Florida by Mrs. Leora Robinson, published in Louisville in 1884. It consists of letters Mrs. Robinson wrote back home about living in Florida. She describes all phases of life in Orange County, including climate, disease, pests, soil, fertilizer, the cost of operating an orange grove, and the “bewildering transformation” that has occurred in Orlando. In a year and a half, it grew “from a little, rude village of two or three hundred inhabitants to one of fifteen hundred.” $2,250.

Speaking of fertilizer, item 192 is Soluble Manures: Circular of the Sulphuric Acid and Superphosphate Company of Charleston, S. C., published in 1870. It describes this wonderful product and includes many pages of customer testimonials. “Feed your land and it will feed you,” it proclaims. Hopefully, it will feed you with something a little more pleasant. $150.

Here is an item that will interest Texas collectors. Item 206 is a bond posting for a suit, a clerical recorded document. It is dated June 1813, and is signed in Missouri by the sued parties, including Moses Austin. It guarantees their court appearance. Austin had settled in what was then Spanish territory west of the Mississippi in the 1790's. It became American territory as a result of the Louisiana Purchase. Austin opened up a smelting plant for lead and did quite well for himself for a while. However, after the Panic of 1819, Austin again sought greener pastures, so once more he headed for Spanish land. This time he succeeded in obtaining a grant from Spanish authorities in Mexico to develop an Anglo-American settlement in Texas. Unfortunately, Moses Austin died before being able to put his plan in place. The job fell to his son, Stephen F. Austin. His son would develop the colony, going on to earn the sobriquet of the “Father of Texas.” $1,250.

Item 160 is a page with autographs by the 19th century Siamese Twins Chang and Eng. They were from Siam, hence the creation of the term “Siamese Twins” to describe twins who are physically conjoined. The brothers were connected by cartilage, and might well have been separated if they had so chosen. They were discovered by a British merchant in 1829, who brought them to the West and managed their display at shows. The brothers did this for a decade before buying a farm in North Carolina and settling down to a more normal life. They married sisters and had 19 children between them. In 1835, the brothers signed this paper in Savannah for Israel K. Tefft, who was one of the more notable autograph collectors of the 19th century. $2,500.