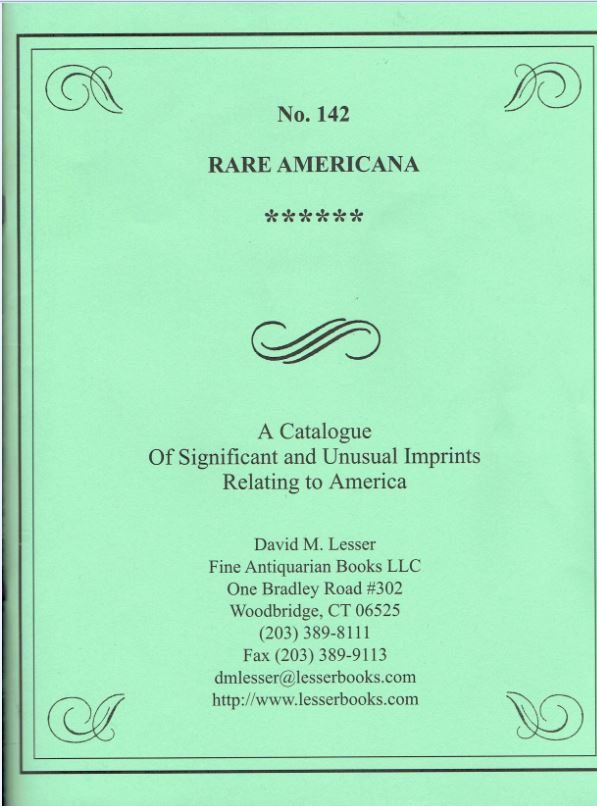 David M. Lesser Fine Antiquarian Books has issued their catalogue 142 of Rare Americana. Most items are shorter form material, ranging from pamphlets to single-page documents such as broadsides. They represent immediate reaction to events more than lengthy, long considered treatises on the subjects of the day. They better reflect the sentiments of the time than those arrived at after a careful review of history. Here are few from this latest selection of mostly American, 18th and 19th century documents.

Abraham Lincoln went from an unknown westerner to a major political voice in the course of a few short weeks in 1858 as a result of his famed debates with Stephen A. Douglas. They were competing for the senate seat from Illinois. Douglas would win that contest, but the more important presidential rematch would go overwhelmingly to the spellbinding Lincoln two years later. A month prior to the first debate, he gave this Speech of Hon. Abraham Lincoln, Delivered in Springfield, Saturday Evening, July 17, 1858. This is the only separate printing of this speech. Lincoln, as we know, was like Douglas in wanting intensely to preserve the Union. Unlike Douglas, he did not believe it could be achieved by acquiescing to practically every Southern demand. In this speech, Lincoln repeated his warning that a house divided could not stand, that one day it must be all slave or all free. He described the Kansas-Nebraska Act, Douglas' famed compromise, as the beginning of a conspiracy to nationalize slavery. While saying that blacks were not equal “in all respects,” Lincoln said they were equal in their right to “life, liberty, and the pursuit of happiness,” and added, “in the right to put into his mouth the bread that his own hands have earned, he is the equal of every other man.” Item 88. Priced at $6,500.

Item 47 is what was known as a “warning-out” warrant. This was something of a colonial version of where a community buys bus tickets home (or to anywhere else) for people living on the street so as not to be obliged to care for them. In the 18th century, in accordance with English law, municipalities were required to provide support for impoverished residents. However, local selectmen in most communities had the power to exclude new residents who might not be able to support themselves. This warrant is addressed to the constables of Swansey, Massachusetts, telling them to warn Jane Dane, who arrived in Swansey from Freetown, that she does not have the selectmen's permission to live in town, and therefore she must depart within 14 days. $650.

Item 143 is a relic from the reconstruction of the state of Texas after the Civil War: Constitution of the State of West Texas, published in 1868 or 1869. A constitutional convention had been called to bring Texas back into the fold of the United States, but many delegates were more interested in dividing the state into new states. This might seem odd, but when Texas was admitted to the Union in 1845, it was done so with the understanding it might be divided into as many as four separate states. There were some logical reasons to do so. The state was enormous, and varied greatly in terms of climate, agriculture, history, cultural background, and such. Regions had widely differing interests. Then there were issues of administering such a far-flung empire from one location. On top of that, there were differing political interests. To the east were persons whose beliefs aligned them with the South, former slaveholders who had enthusiastically favored the Confederacy. To the west were German immigrants, liberals in their political beliefs, who were loyal to the Union. Even within the political parties there were divisions. Some Republicans wanted to carve out a state in the west to gain power, since Texas as a whole was likely to be a Democratic state. Still, some Democrats wanted the eastern part of the state to be separated for fear that more liberal westerners, combined with freed blacks, would take control of the state. Finally, there were those with political ambitions, recognizing that more states meant more positions of political power to be divvied up. The major argument against dividing the state into two or more new states was the cost of new capitals and new state governments among a small and less than wealthy population. Nevertheless, Texas might well have had a majority for division, but there was never a majority for any particular division. Numerous new boundaries were proposed, but no one of them could ever garner a majority. So the State of West Texas never came to be, though it does have its own constitution. $1,000.

Horse theft isn't a big issue these days, but in the 19th century, it was a major concern. It was a little like automobile theft today, but horses were a larger part of a person's net worth in those days and most weren't insured. You could get yourself strung up from the nearest tree for stealing someone's horse. The result was organizations were formed to prevent horse theft and capture the thieves. Item 4 is the Report of Sub-Orders of the Anti-Horse Thief Association, published in 1885. This group of organizations operated in the Midwest – Iowa, Missouri, Kansas and Illinois. Of course, it would not be too many more years before the horse thief organizations would go the way of the horse itself with automobiles making their appearance. $275.

Item 63 relates to a major moment in the history of the labor movement, the Haymarket bombing in Chicago in 1886. A huge protest had been called as part of labor's demand for an 8-hour work day. A bomb exploded and several policemen were killed. It provided an opportunity for a government and press with little sympathy for workers to crack down. Trials were held, several convicted and sentenced to death. Three still in prison in 1893 when recently elected governor John Peter Altgeld took office were pardoned by the new Governor, who, like many, believed the trials were a sham. That led to the following anonymous attack: The Pardon of the Anarchists. The writer describes Gov. Altgeld's motives as “If I can secure the support of the low, the ignorant, the disaffected, the turbulent and the criminal classes, enough of my party will unite with them on party grounds to insure my political success.” Of course, it was just the opposite. The progressive Altgeld, who fought for worker's rights, brought on the wrath of the powerful press and was defeated for reelection in 1896. Even Theodore Roosevelt, who would adopt many of the progressive values Altgeld battled for, attacked him personally as supporting murderers. $450.