A Collection of Archives from Brian Cassidy Bookseller 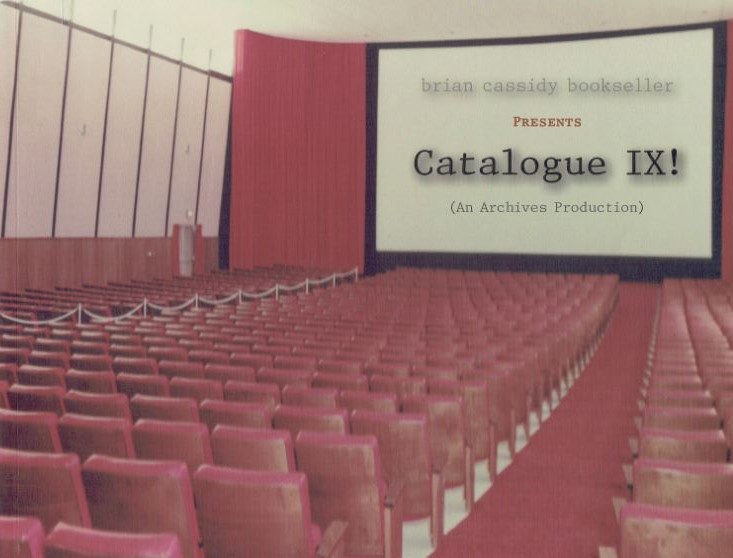 An archive of archives.

Brian Cassidy Bookseller has issued Catalogue IX! (An Archives Production). For this selection, Cassidy has switched from being a bookseller to being a seller of archives of ephemeral material. Most of these archives are filled with visual material, including photographs, drawings, posters and clippings. Others are more textual, such as collections of personal letters. While a few of the collectors bordered on fame, most of these archives were compiled by ordinary folk, collections reflecting their own lives and interests, some personal adventures, others related to their careers. Each provides a slice of life from an earlier time, most ranging from the turn of the 20th century until roughly 1980. Here is a look at a few samples of these fascinating archives.

We start with an archive from an Edison Phonograph dealer in Bloomington, Illinois – G. A. Ensenberger and Sons' Department Store. Ensenberger's was a Bloomington icon for well over a century, finally closing its doors with the chain-ization of department stores in 1995. The building has been converted to condominiums. The archive includes photographs, clippings, promotional materials, and signatures of performers who played their music on behalf of Ensenbergers. Included is a typed signed letter from nimble xylophonist “Friscoe” Lou Chiha, who performed at a local theater in 1917. In those days, Edison Phonograph put on “Tone Tests” to sell their phonograph players. “Friscoe” was one of their artists. They would play in sync with a phonograph recording, and at one point stop playing, while the music played on. Supposedly, audiences would gasp in amazement, unable to tell the difference between the live performance and the Edison recording. Here... you can try a “tone test” too. This is a link to a recording of Chiha's Buzzin the Bee - www.youtube.com/watch?v=VIKZpch1yBk. The man could really rock those vibes. Can you tell the difference between this recording and a live performance? If not, you are even more tone deaf than I. There are photographs and signatures from numerous other performers and images of various venues played, including New York's Carnegie Hall. Item 22. Priced at $850.

Item 42 is a pair of mimeographed manuscripts: The Train Safari 1956 and Back to Africa 1958. No, they did not take part in a safari by train. The manuscripts were produced by Russell and Aileen Train. They took two trips to Africa, and these accounts were evidently produced for a small number of friends. The second trip proved to be a real eye-opener. Russell Train was a Tax Court Judge, but his 1958 trip set his life off in a different direction. He was shocked by how much the landscape and wildlife populations had changed in just two years. He became a dedicated conservationist. Train was a founder of the African Wildlife Foundation and the World Wildlife Fund, which he actively served as Chairman Emeritus until his death in 2012 at age 92. In 1965, he resigned his Tax Court position to focus full time on environmental issues. Train had strong Republican connections, his father having been an aide to President Hoover. As such, he became Richard Nixon's environmental advisor when the latter was elected President, serving as Undersecretary of the Interior, Chairman of the White House Environmental Policy Council, and the second Administrator of the Environmental Protection Agency. In his years, he was instrumental in numerous environmental initiatives, including the National Environmental Policy Act, the requirement for Environmental Impact Statements for projects potentially damaging to the environment, the Coastal Zone management Act protecting wetlands, creation of the EPA, passage of the Endangered Species Act, the Clean Air Act, and the Clean Water Act. Our air, water, and land are cleaner today because of the work of Russell Train. It all started here. $1,500.

Item 69 is the Photo Album of Edward McDonald. From Oct. 1937 – Sept. 30 1939. 108 Co CCC South Lee, Mass. McDonald enrolled with the CCC (Civilian Conservation Corps), the jobs-producing agency of the Roosevelt administration, for the full two years permitted. He worked on the Beartown Ski Area in the Beartown State Forest at South Lee, in western Massachusetts' Berkshire Mountains. It featured an 800-foot drop, and its proximity to New York City made it a popular spot. Begun in 1935, by 1940 there were trains being run from the city to the ski area. Use became intermittent during the war years, but after a period of inactivity, it reopened bigger and better in 1951. The CCC worked on numerous ski areas, many still in use today, but for whatever reason, the Beartown Ski Area failed. It closed down in 1966, and the forest has since regrown over the trails, though some remnants are still visible. McDonald's album contains 145 photographs of the CCC camp, work, and people, with McDonald's annotations. $1,500.

Item 43 is a young woman's photo album circa 1939-1940 from around Tel Aviv in what was then Mandatory (British mandate run) Palestine. Most have manuscript Hebrew inscriptions (translations for many are available). She was a student at Tel Aviv's High School of Commerce. Photographs show friends and family, a beachside resort, activities such as horseback riding and rifle shooting, archeological sites and more. The pictures show an oasis of peace and happiness in a world rapidly spiraling to terrible depths, ones that would likely engulf her, if not personally during the war, then in the revolts that would come to British Palestine a few years later. $800.

Item 25 is a collection of 70+ broadsides and pamphlets promoting movies shown in Baltimore from 1960-1963. There are some notable films such as Hitchcock's Psycho, Breakfast at Tiffany's, and The Hustler. Many are from B-grade films, including the likes of Village of the Damned, King Kong vs. Godzilla, Peeping Tom, I Married a Monster from Outer Space, Mothra, Wasp Woman, The Head, and Kiss of the Vampire. $750.