The Best of 2014 from Yesterday's Muse Books 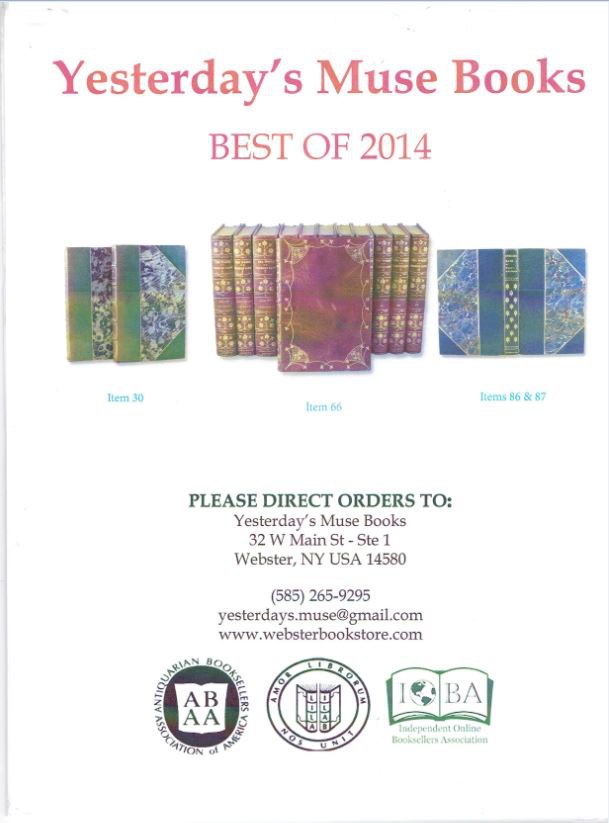 Yesterday's Muse Books has released a catalogue of the Best of 2014. It was a very good year. The western New York bookseller's catalogue could be described as a miscellany of highlights as just about any subject might be found. We do note the selections are particularly wide in the fields of Americana (much of it colonial or early U.S.), literature, religion, and Arctic exploration, while other subjects include biography, medicine, military, and children's books. Here are a few items you will find in this year-end review.

We start with a book that comes with a most significant provenance. Item 3 is a copy of Cotton Mather's Magnalia Christi Americana; or the Ecclesiastical History of New-England, from its First Planting in the Year 1620, unto the Year of Our Lord 1698. Despite its title, Mather tells us about much more of the earliest days of colonial America than just what went on in church. It is an excellent history of its time. Mather, America's leading religious figure at the turn of the 18th century, has long been tarnished by his tacit support of the Salem witch trials, but he was a man learned in many subjects. Regardless of one's opinion of Mather, it is the family connection of this copy that is most intriguing. It belonged to several generations of the family of Harriett Beecher Stowe. The book made a great impression upon her. In her semi-autobiographical book, Poganuc People, Mrs. Stowe wrote, “But there was one of her father's books which proved a mine of wealth to her. It was a happy hour when he brought home and set up in his bookcase Cotton Mather's “Magnalia,” in a new edition of two volumes. What wonderful stories these! and stories, too, about her own country, stories that made her feel that the very ground she trod on was consecrated by some special dealing of God's providence.” This American edition was published in 1853 and contains the ownership stamp of her husband, Rev. C.E. Stowe, and signatures of her son, Charles E. Stowe, and her grandson, Lyman Beecher Stowe. Priced at $3,500.

Cotton Mather's father was also an important Massachusetts Puritan minster, not exactly a fun guy, finding his own minister father a bit too liberal, but a very influential figure like his son. For those who think a picture is worth a thousand words, and Increase Mather wrote many thousands of words, item 29 is The Portraits of Increase Mather... by Kenneth B. Murdock, published in 1924. Murdock gathered all known contemporary portraits of Mather, including three herein reproduced for the first time. This was a limited edition, #35 of 250 copies. It was printed at the Harvard University Press (Increase Mather was also President of Harvard University a few centuries earlier) by Bruce Rogers, the noted typographer and type and book designer. $125.

Item 107 is Arctic Explorations: The Second Grinnell Expedition in Search of Sir John Franklin, 1853, '54, '55, published in 1856. Author Elisha Kent Kane was surgeon on the first Grinnell Expedition, and in command of the second. Henry Grinnell was a wealthy merchant who sponsored the two expeditions in hopes of learning the fate of explorer John Franklin, whose ships disappeared a few years earlier attempting to find a northwest passage. Kane wrote accounts of both expeditions. The first found Franklin's first winter camp, but not the men. The second was similarly unsuccessful, but came back with much charting of the far north. They traveled farther north than had anyone else at the time. Their ship became icebound and Kane was forced to lead his men on a harrowing overland journey to rescue (something Franklin was unable to do). $150. Yesterday's Muse also has a copy of Kane's account of the first Grinnell Expedition available.

Here is another, and quite exciting account of the Second Grinnell Expedition: Professor Sonntag's Thrilling Narrative of the Grinnell Exploring Expedition to the Arctic Ocean, in the Years 1853, 1854, and 1855. August Sonntag's account is filled with information about the harrowing journey and escape, along with opinions on what happened to Franklin and how one might be able to reach the North Pole. There was only one problem with the account. It was not written by the Grinnell Expedition's astronomer. It was a fraud. Charles C. Rhodes had purchased a brief article written by Mr. Sonntag from his wife. He then greatly expanded on the article to create a work of fiction, based on Sonntag's article and other polar writings. He was able to get away with it for awhile because Sonntag was working in Mexico. Several of his comrades from the mission denounced the work and stated they did not believe it was written by Sonntag. When Sonntag found out about the book, he whipped off a letter from Mexico saying, “I am very much mortified to see my name at the head of such a wretched concern, especially as I never wrote anything about the expedition which could have given cause to a book like this.” Item 115. $250.

Perhaps the most famous, or second most famous, of Dr. Seuss' books is Green Eggs and Ham. However, Seuss wrote another book about eggs in 1953, seven years earlier. Item 61 is Seuss' Scrambled Eggs Super! It is the story of a boy who, tired of ordinary scrambled eggs, travels the world to collect the eggs of various exotic birds that only Dr. Seuss could create. $175.