From the Archives of Victor Gollancz Offered by Peter Harrington 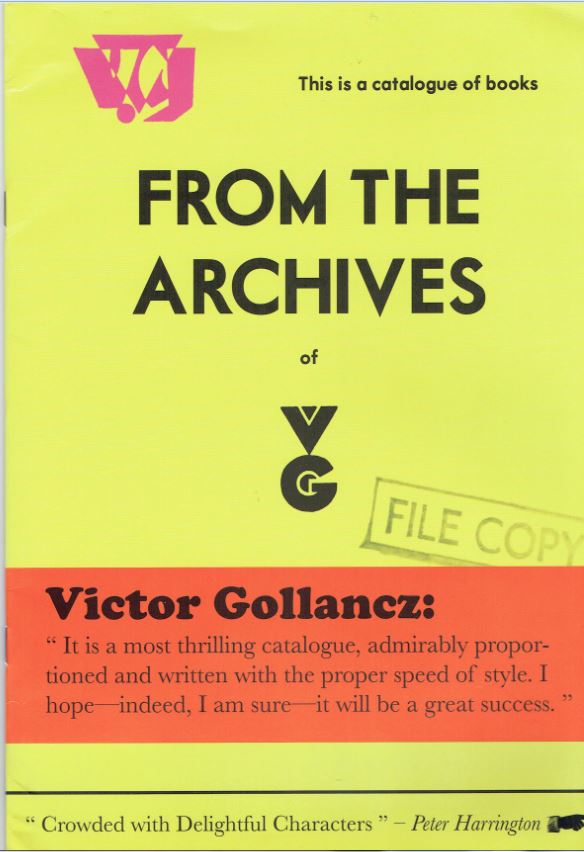 From the archives of Victor Gollancz.

Peter Harrington has issued a catalogue From the Archives of Victor Gollancz Ltd. Victor Gollancz was a man of strong political beliefs who worked in the printing business as a young man. His views ranged from liberal to socialist to sympathetic to communism for awhile, but he changed his opinion of the last of those after the Soviet-Nazi treaty of 1939. Gollancz was one of the first to understand the dangers of the rise of the Nazis in Germany and later realize the extent of the horrors being inflicted in that land during the war. In 1927, he set up his own publishing company, to help print the works of those who espoused similar views, but he would go on to publish many other types of books as well, including much fiction. His use of bright yellow dust jackets with recommendations and other enticing comments on the covers was designed to draw attention to the firm's books.

Victor Gollancz died in 1967. His company, Victor Gollancz Ltd., passed to his daughter, and was sold to outside publishers in 1989. It has since changed hands a few times and today still exists as an imprint for science fiction and fantasy books. The books in this archive were acquired from Gollancz's successors. They had been file copies and most are stamped as such. They have been kept together, out of circulation for a long time, and are mostly in very good condition or better, dust jackets included. Harrington notes that most are very uncommon if not seriously rare. Gollancz tended to publish first editions in short runs to see if there was a market before rolling them out. The catalogue describes 332 of them, but Harrington notes that there are more available online. Most were printed in the 1930's but a few come from the closer years of the adjoining decades. Here are a few of these titles.

Victor Gollancz had pacifist sympathies, so this book would have been a natural: Robert Bernays' Naked Fakir, published in 1931. It is the author's account of India's Mahatma Gandhi, who led his nation to independence through non-violent resistance. Gandhi had been promoting a break from Britain during the 1920's and in 1930, India's Congress declared its independence from the mother country, a declaration ignored by the colonial power. Gandhi participated in a major protest against the salt tax that year (Americans can relate to such a tax protest against the British), though in the year this book was published, he reached a pact with the British viceroy that restored some order to the colony. Nonetheless, Gandhi would press on to his ultimate goal of independence, finally achieved in 1947. Item 75. Priced at £85 (British pounds, or roughly $129 in U.S. dollars).

Item 185 is the first edition in the English language of a major work that left us with the expression “kafkaesque” to describe a bizarre, irrational situation. The Trial, Franz Kafka's unfinished masterpiece, was first published in German in 1925. This edition, translated by Edwin and Willa Muir, was published by Gollancz in 1937. It is the story of a man, known only as “K,” who is arrested on unstated charges. He faces various proceedings, never knowing what he has supposedly done wrong, in a surrealistic court, represented by a lawyer who isn't of much help. Eventually, he is hauled off and executed. Kafka wrote the unfinished book ten years before he died, evidently abandoning it and wishing it never be published. He left instructions that it be destroyed after he died, but fortunately, his literary executor ignored his wishes and had it published. £8,750 (US $13,273).

This next item is also a product of Gollancz's political views: Native Son, by Richard Wright. Published in 1940, this is a first UK edition of a book first published the previous year in America. It is the black writer's fictional account of a young black man, growing up in utter poverty in Chicago, and the despair and tragedy to which it inevitably leads. It was controversial in its day, long before the Civil Rights movement began to draw sympathy from much of white America. Item 326. £275 (US $417).

This is the strange story of Gaspard Hauser. The Orphan of Europe. Published in 1930, it is a first edition in English of a French book about a young man who died almost a century earlier. Kaspar Hauser showed up in the streets of Nuremberg one day around the age of 16 with a note and a very strange story. He claimed to have been raised in a tiny, dark cell, with almost no human contact. His story elicited both curiosity and sympathy. No one could figure out his true identity or history. Some believed he was the captured son of a nobleman. In the years following, he was taken in by various sympathetic people. Ultimately, it appears that just about every one of them came to believe Hauser was a liar and a fraud. He died in 1833 of a stab wound, which many believed was self-inflicted, the knife stuck in a little too deep by a faker trying to rekindle interest in his plight. Octave Aubrey's historic novel was originally published in French in 1928. Item 32. £85 (US $129).

Item 19 comes from 1929, the first UK edition of The Polar Adventure. The “Italia” tragedy seen at close quarters, by Odd Arnesen. This is an account of the tragic second North Pole expedition by Italian Umberto Nobile, originally published in Norwegian. In 1926, Nobile and Norwegian Roald Amundsen, the first man to reach the South Pole, piloted a semi-rigid airship over the North Pole. It may, or may not, have been the first such overflight, depending on whether you believe Richard Byrd's earlier claim. Nobile and Amundsen later had a split, and in 1928, Nobile set out on a second such expedition. On the return flight, the Italia crashed. Only six of the sixteen on board survived, Nobile being one of them. Amundsen put away his hard feelings and joined the search. He was lost, his precise fate unknown. Nobile lived another half century. £175 (US $265).