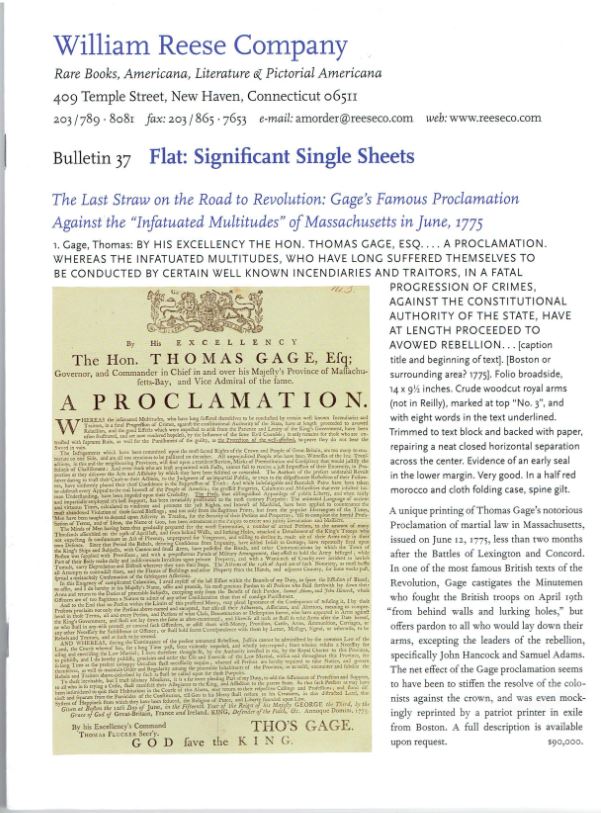 The William Reese Company has issued their Bulletin 37. Flat: Significant Single Sheets. There are no books nor even pamphlets here. Still, these are important historical documents. Containing primarily broadsides, these were announcements of important news or events from a time when there were no electronic means of relaying information quickly. Other items are official documents and such pertaining to issues of the day. These are a few samples of the important single page documents from many years ago.

The item seen on the cover is A Proclamation, issued by His Excellency the Hon. Thomas Gage on June 12, 1775. Gage was the military governor of the Province of Massachusetts Bay, and to the locals, he was neither excellent not honorable. Gage had come from England to impose the Intolerable Acts, issued after the Boston Tea Party, and other indignities on the restless population. An attempt was made by British forces to seize weapons stored in Concord, leading to the Battle of Lexington and Concord, an American victory which highly displeased Gage and the British. Gage then issued this proclamation, which begins “Wheraes the infatuated Multitudes, who have long suffered themselves to be conducted by certain well known incendiaries and traitors, in a fatal progression of crimes, against the constitutional authority of the state, have at length proceeded to rebellion...” Gage proceeded to offer a pardon to all who would lay down their arms, except for the rebellion's leaders, notably John Hancock and Samuel Adams. It is not clear whether the colonists were more angered or amused by Gage's attempt to stifle their rebellion. Five days later, the British and Americans would be in battle again, this time at Bunker Hill, a British “victory” that was so costly in British casualties they could not afford to chance another such success. Item 1. Priced at $90,000.

Three years later, the British would attempt to be more conciliatory, but by then it was too late. Item 4 is a Manifesto and Proclamation. To the members of the Congress, the members of the General Assemblies or Conventions of the several colonies...and all others, free inhabitants of said colonies, of every rank and denomination... published in 1778. The British had been defeated at the Battle of Saratoga the previous year, and were concerned the colonists would form an alliance with France, making their task of holding onto the colonies even more costly. The offer was far more lenient than ever before. The British promised a full amnesty, repeal of Parliamentary taxes, and an arrangement for home rule within the colonial empire. Had this been offered prior to the Declaration of Independence, the colonists might have accepted, but by this point, nothing short of full independence was acceptable. The British made the offer both to the legislatures and to the people separately, hoping the people would agree to the deal on their own if their legislatures balked. They had no luck with either. $37,500.

Even before independence was declared, the Continental Congress was preparing for war. Item 19 is a broadside of an act of April 3, 1776 (the printing is somewhat later, possibly 1778). It is addressed as Instructions to the Commanders of Private Ships or Vessels of War...Authorizing Them to Make Captures of British Vessels and Cargoes. America had virtually no navy at the time, but an active merchant fleet that could act as privateers, capturing British ships and cargoes for a percent of the proceeds. It allows these ships to board and capture British vessels except those bringing settlers or weapons intended for use by the colonists. In an era when the use of torture is again being debated, it is interesting that America's founders, in this proclamation to privateers, expressly forbade the practice. “If you, or any of your Officers or Crew shall, in cold Blood, kill or maim, or by Torture or otherwise, cruelly, inhumanely, and contrary to common Usage and the Practice of civilized Nations in War, treat any Person or Persons surprised in the Ship or Vessel you shall take, the Offender shall be severely punished.” $17,500.