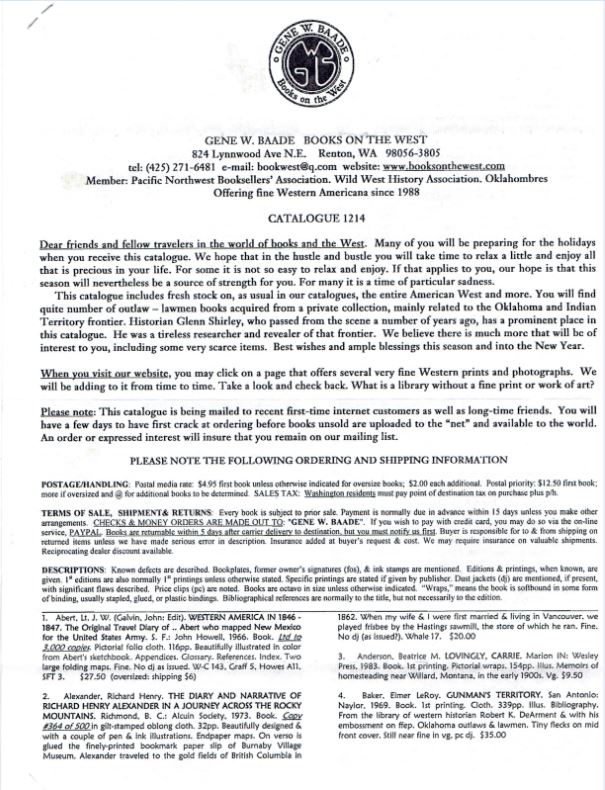 Books on the West.

Gene W. Baade Books On The West has issued Catalogue 1214. These western books aren't going to break your bank. Prices are mostly in the double digits, with many to the lower end of that spectrum. There are many books here not just for collecting, but also actually to be read! You can learn about the characters of the Old West, some famous, some obscure, who lived the lives we dreamed about growing up. Sometimes, the pen is mightier than the gun. Here are a few.

We will start with a trial statement arising from a major confrontation at an Idaho mine at the turn of the century: The Closing Argument of W. E. Borah for the Prosecution, in the Great Coeur D'Alene Riot Murder Trial, Delivered July 27, 1899. The Coeur D'Alene Riot arose seven years after another confrontation at the mines, this time involving a local mine that did not employ union miners, and was cutting wages. Miners from the area determined to blow up the mine's mill, making it impossible to process the ore. They commandeered a train, picking up hundreds of miners along the way, plus a heavy load of dynamite. By the time the train arrived at the site in Wardner, it was joined by hundreds of other miners who walked there. The charge was set, the mill destroyed, and two miners killed, including one non-union man who worked at the mine. Idaho Governor Steunenberg, thought to be somewhat sympathetic to miners, called for federal troops. Hundreds of miners were rounded up and eventually held in the “bullpen,” an unsanitary structure, and held for as long as a year with no charges. Never mind niceties like habeas corpus. Meanwhile, one mine official, Paul Corcoran, was charged with the non-union miner's death. He was placed on trial, with William Borah brought in to prosecute the case. His closing argument evidently swayed the jury. Corcoran was convicted of second degree murder and sentenced to 17 years in prison. He was pardoned two years later. Borah would be called in again in 1907 to prosecute a case against three other union officials for the murder of Governor Steunenberg, who was assassinated in 1905. This time, he was up against Clarence Darrow for the defense, and he lost. Borah, who had only recently been elected as a senator from Idaho, went on to serve in the senate until his death in 1940, the longest serving senator at the time. Despite his confrontation here with labor, he was known as a progressive senator. Item 20. Priced at $23.50.

We all know who killed Billy the Kid – Pat Garrett. So, who killed Pat Garrett? Twenty-seven years later, the ex-sheriff himself was gunned down, not in a wild shoot out, but while urinating alongside a wagon on a trip through rural New Mexico. Gun downed when most vulnerable. He was traveling with two others, one who hated him, the other probably didn't much like him. Wayne Brazel, who leased some land from Garrett, and was arguing with him during that trip, admitted to killing him but claimed it was self-defense. He was tried and acquitted. Item 134 purports to give the answer: Shotgun for Hire: The Story of “Deacon” Jim Miller, Killer of Pat Garrett. The author of this (1970) book was western writer Glenn Shirley. Miller, also known as “Killer” Miller, was a hired gun with a long string of killings to his name. He was a professional. He was also related to the wife of Carl Adamson, the other man traveling with Garrett that day. It is possible that a land dispute was the cause of the killing, but there were other possibilities, as by that time in his life, Garrett had a lot of enemies but few friends. There is a third suspect with other motivations whose name also pops up. Most still think it was Brazel, but no one knows for certain, and the townspeople at the time had little interest in digging too deep, be it out of fear or relief that the disliked Garrett was gone. If Miller was Garrett's assassin, then the next question is who killed Miller? The answer is a whole bunch of people, dozens. The hired gun was arrested or tried for numerous killings but always beat the rap. The last time, he was being held for trial in Ada, Oklahoma, following a killing a year after Garrett died. The good people of Ada feared he would get off again, so in the middle of the night, they took Miller and three co-defendants out of their jail cells and hung them in an old barn. This copy of Shirley's book was signed by the author. $150.

We have just touched the surface when it comes to people from the Old West who were handy with a gun. Here's where you can read about a thousand more: The Biographical Album of Western Gunfighters, by Ed Bartholomew, published in 1958. It covers gunfighters on both sides of the law, outlaws, sheriffs, marshals. Sometimes, gunfighters plied their trade on both sides of the law. Along with the descriptions, the oversized book contains over 600 rare photographs of the gunfighters described. Item 16. $225.

Next up is an autobiography of a man who lived a long and active life: Memoirs of Orange Jacobs written by Himself, Containing Many Interesting, Amusing and Instructive Incidents of a Life of Eighty or More Years, Fifty-Six Years of Which Were Spent in Oregon and Washington. Jacobs was born in Geneseo, New York, went to Michigan in his youth where he attended University of Michigan and became a lawyer, and then, in 1852, made the long trek to Oregon. He would spend the rest of his life there and in Washington, holding numerous offices along the way. He served two terms as Washington's territorial representative in the other Washington, was an Associate then Chief Judge of the territory's Supreme Court, and was a mayor of Seattle. He received the first honorary degree ever awarded by the University of Washington. His autobiography was published in 1908 when Jacobs was 81, and he would add 6 more years before the conclusion of his interesting and amusing life. He has signed this copy. Item 65. $100.

I am familiar with the six flags over Texas, but 46 of them? Item 40 is The Romantic Flags of Texas, a signed presentation copy of this 1936 book by Mamie Wynne Cox. Ms. Cox was a teacher, writer, historian, and member of the Daughters of the Republic of Texas. Many of these flags were never official. They are various proposed designs, or ones used by the Texians when they were fighting for independence from Mexico. $250.