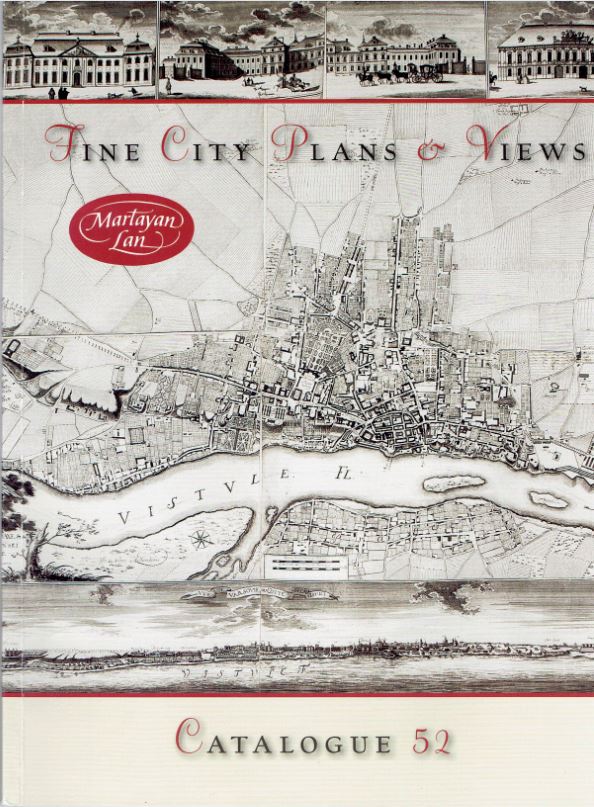 Martayan Lan has issued their Catalogue 52 – Fine City Plans and Views. These views and plans cover a wide range of territory. Martayan Lan has broken those down into sections: Large-Scale City Plans, City Atlases, New York City & State, New England, Mid Atlantic United States, South Midwest & West, Canada, Latin America, Asia & Africa, British Isles, Paris, Italy, Low Countries, Poland, Germany/Hungary. Some of these are somewhere in between a view and a map. Looking as if drawn from the top of a nearby tall mountain, they provide a view of the city from which all streets and buildings can be seen, enabling it to be used as a map. Most are quite old, from as early as the 15th century up to the 19th. Here are just a few samples of what is in store.

We begin with a View Of The Ruins After The Great Fire In New-York, Decr. 16th and 17th. 1835. It depicts smoldering ruins the day after the worst fire in New York City's history. Believed to have been started by a broken gas pipe and a coal stove, the fire occurred on the coldest night in the city in 35 years, with temperatures in the teens below zero. The nearby East River was frozen over, requiring firefighters to cut holes through the ice to reach water. Even then, hoses froze up and pumps stopped functioning. Seventeen city blocks and almost 700 buildings were destroyed. Most of the city's insurance companies were bankrupted. Fortunately, the area, around today's financial district, was mainly warehouses and businesses rather than residential, so only two people died. The loss was $20 million, which was several times the cost of the Erie Canal, trade from which had made the city's business district prosperous. Continuing trade enabled it to be rebuilt in a relatively short time. This hand-colored view was engraved by William J. Bennett in 1836. Item 8. Priced at $3,850.

We move from a look at a city after the conflagration to one from before. Item 22 is a Map Of The City Of Galveston Texas, by E. A. Hensoldt/Galveston Land & Improvement Co. This company promoted an expansion of the city to the west, which is depicted on this plan. The company had been formed by a group of Colorado businessmen who wanted to participate in the growth of what was a very prosperous and growing city. Along with the plan, it lists Galveston's churches, hotels, businesses, cotton presses, schools and colleges, and cultural institutions, including an opera house. What no one could have imagined at the time is that just a decade later, the island city would be overrun by a disastrous hurricane, killing 8,000 people (the worst natural disaster in terms of lost lives in American history), and totally destroying the city as it existed on this map. $9,500.

Item 35 is Lundinum, feracissimi Angliae Regni metropolis, by Braun and Hogenberg of Cologne. This 1572 map of London is described as “the first surviving map of the whole of London and Westminster,” though it was surprisingly created in France. It was the first plan to appear in Civitatis Orbis Terrarum, the earliest atlas of city plans and views published. The presence of the spire of St. Paul's indicates it depicts London in the 1550's as the spire was destroyed by a fire in 1561. It likely was based on an earlier map, explaining this oldest surviving coming from France. It depicts London from high across the Thames, four people in period dress standing in the foreground. A single bridge spans the Thames. A paean to the Hanseatic League, an organization of merchants along the northern coast of Europe, is printed in the corner (it may have been responsible for the plan, which would explain its French origin). $10,000.

The next map is of La Luisiana, a Spanish map dating from 1762. It actually contains three maps, the major one being of the Louisiana Territory, the second a street map of New Orleans, and the third the headwaters of the Mississippi River. The last one was necessarily speculative since no one had actually discovered the source of the great river at that time. The map, by Spanish cartographer Tomas Lopez y Vargas Machuca, and written in Spanish, evidently reflects Spain's attempt to understand the large territory it had just acquired. France had been routed in the just ending French and Indian War, and its Spanish ally was forced to cede Florida to the victor, Great Britain. As compensation to its ally, France gave the territory to Spain. It would remain there until 1803 when Napoleon, now in control of Spain, took the territory back and sold it to the United States. This map also shows the area west of New Orleans, now known as Texas, appropriately labeled “Tejas.” Item 18. $12,000.

Next is Plano General de Mexico... the work of Diego Garcia Conde. Martayan Lan describes this as “the most important early plan of Mexico City and one of the most significant maps of any kind produced in Mexico.” Conde was both a military officer and a mapmaker. He was assigned the task of preparing this map during the brief, enlightened period of Viceroy Conde de Revillagigedo. Begun in 1793, it was not published until 1807. This is a copy of the only printing of the rare large format, nine sheets that when joined together measure approximately 4 ½ x 6 ½ feet. It was later reprinted in a smaller format but the original plates were lost. Conde would later return to his military role, fighting Mexican rebels on behalf of Spain, but after the rebels succeeded, he was one of the few Spanish military leaders to stay on and serve the new nation. Item 4. $85,000.