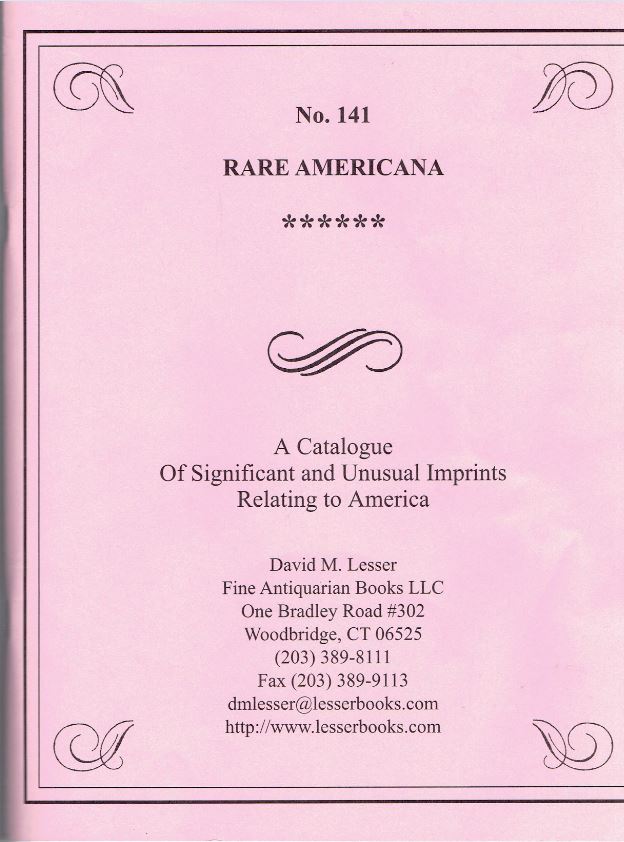 David M. Lesser Fine Antiquarian Books recently published their No. 141 of Rare Americana. It fits right in with the area in which Lesser specializes – pamphlets, broadsides, and other shorter form material pertaining to America, with the greatest concentration from Revolutionary times to Reconstruction. Naturally, much involves the predominate, divisive issue of the period between the Revolutionary and Civil Wars – slavery and its abolition. However, there were many other things going on during this period, and the debates over all of these issues come to life in these contemporary publications. Here are a few examples.

Long before the first plans were proposed to build a railroad to the Pacific coast, Lewis Tarascon had a proposal more suitable to pre-railroad times – a wagon road. He described it in this Petition of Lewis A. Tarascon [and others] Praying the Opening of a Wagon Road, from the River Missouri, North of the River Kansas, to the River Columbia... The petition was taken seriously enough to be printed by the Senate in 1824. Tarascon proposed obtaining a strip of land 100 miles wide from the Indians in which to site the road. This was the day in which publicly funded internal improvements were very controversial, but Tarascon planned to enable the company which built the road to trade in furs from the Northwest, still a lucrative business at the time. Bridges and ferries were proposed for water crossings, and tolls likely would have been imposed to provide additional funding. Of course, Tarascon's “Columbia Road” never came to be, but it certainly would have been a great convenience a few decades later when settlers headed out across the much rougher Oregon Trail to reach the Pacific West. Tarascon did not give up easily, and a decade later, he came up with an idea of creating connecting communal villages, starting at the upper Mississippi River, and then being added one-by-one farther west, eventually reaching a high point in the Rocky Mountains, and then proceeding all the way to the Columbia River. He dreamed of these being utopian communes, where everyone lived in peace and harmony. Quite obviously, this never happened either. Item 142. Priced at $350.

Eulogies for the recently departed are not often the subject of controversy, but this unnamed author was highly critical in A Review of Dr. John M. Mason's Oration on the Death of Gen. Hamilton, published in 1805. Mason was a good friend of Alexander Hamilton, and presumably spoke most highly of America's youthful founding father and leader of its early economic policy. The author describes Mason's speech as “a florid piece of declamation, resembling rather the exercise of a school-boy than the discourse of a divine...an extravagant panegyric.” What would set him off about a speech honoring a dead hero, where one would expect some natural embellishment of the subject? The problem was not so much what Mason said, but what he didn't say. The writer believed that Mason should have been more forthright about the ugly side of Hamilton's death, “the dreadful effects of duelling.” Hamilton was killed in a duel with Aaron Burr, and the author thought Mason should have used the opportunity to alert “all who were religiously disposed, and especially the clergy, to exert themselves in proclaiming the sinfulness of duelling.” He hoped that if the clergy expressed its abhorrence to dueling, people like Hamilton would be able to decline such challenges without it hurting their reputation. Item 70. $275.

There were some unhappy people around St. Louis at the time of this Representation and Petition of the Representatives Elected by the Freemen of the Territory of Louisiana. 4th January, 1805. The Louisiana Territory, as purchased from France, was being divided into two territories, what is today's state of Louisiana, and all of the rest, that vast area with St. Louis the major city. This large, but mainly uninhabited (by whites) territory, was to become a district of the Territory of Indiana, the old Northwest, then ranging from Ohio and Michigan to the Mississippi River. The Louisianans were not pleased. They herein objected to being subject to “the dictates of a foreign government; an incalculable accession of savage hordes to be vomited on our borders! an entire privation of some of the dearest rights enjoyed by freemen!” They obviously had a low opinion of their neighbors from Indiana. One of those “dearest rights enjoyed by freemen” was the right to enslave other men. Slavery was legal in Louisiana, but not in the Indiana Territory. Congress heard the petitioners' plea, with the Louisiana Territory becoming the independent Missouri Territory in 1812. Item 94. $1,500.

Horse stealing was taken very seriously a couple of centuries ago. People depended on their horses. Some jurisdictions imposed the death penalty, presuming your neighbors didn't get there first with a rope. However, one of the consequences of harsh penalties was greater use of executive pardons. Pennsylvania did not have such draconian penalties for horse thieves in 1797, but perhaps the convicted thief being a poor man's wife led Governor Thomas Mifflin to be more lenient in the case of Elizabeth Hyton. She had been sentenced to a month in jail and a $60 fine. That doesn't sound like much, and was lenient for the time, but $60 was an enormous amount of money back then for a poor family like the Hytons. Item 76 is a petition from John Hyton to the governor, in which he explains “that your petitioner is very poor and in distressing circumstances and unable to pay said fine, having also three small children who depend upon your petitioners daily labour for their scanty subsistence.” He therefore requested the Governor take into account “his deplorable situation” and cancel the fine. Governor Mifflin was evidently moved as once her one-month jail sentence was completed, he pardoned Mrs. Hyton. $600.

Black men had little chance in American courts in the 19th century. Half a century after this case, tried in 1808, the Dred Scott decision said that, in effect, they had no rights at all. So, this case is an interesting exception. It is an account of the case of The Commissioners of the Alms-House, vs. Alexander Whistelo, a Black Man; Being a Remarkable Case of Bastardy. Tried and Adjudged by the Mayor, Recorder, and Several Aldermen, of the City of New York... The Alms-House was concerned as they didn't want to support the child if the father could be found. Lucy Williams, described as “a yellow woman,” had charged Whistelo, a black man, as being the father of her “female bastard child.” Alexander Whistelo, fortunately, had some connections, being the coachman for the renown Dr. David Hosack, who testified at the trial. It was pointed out that the girl “appeared to be the child of a white man.” A Dr. Secor testified that children of black parents appear whiter when first born, but that “he supposed that it had been begotten by a white man.” Testimony was given about the appearance of the offspring of various racial connections, but ultimately, the Mayor was swayed by “the want of crisped hair.” Also, Lucy Williams' testimony that she had had relations with a white man as well as Whistelo sealed the deal. Item 109. $1,000.