Rare Books of the American West from Old West Books 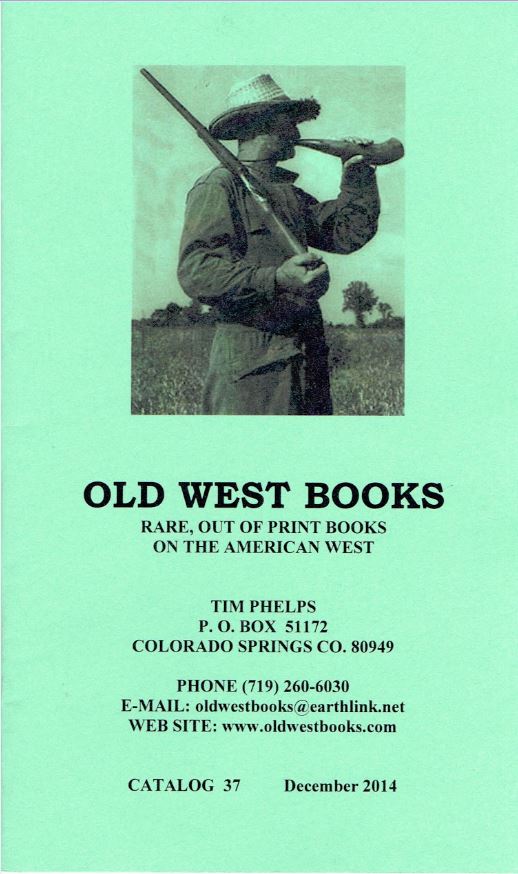 Old West Books has issued its Catalog 37 of rare, out of print books on the American West. It is divided into two groupings, “new” items, which are actually mostly the older titles, but new to Old West's inventory, and those with scarce to rare dust jackets. These are generally somewhat newer titles as pre-20th century works rarely had dust jackets. Here are few of these Old West books offered in this latest catalogue.

Item 14 is Richard Cordley and others' eyewitness account of a terrible civilian massacre during the Civil War: The Quantrell Raid! An Account of the Burning and Sacking of the City of Lawrence, Kansas, and the Murdering of One Hundred and Fifty of Her Citizens, by a Band of Ruffians under Quantrell, August 21, 1863, as Given by...Who Were Eye Witnesses of the Barbarous Scene – Unparalleled in the History of Civilized Warfare. William “Quantrell's” name was actually “Quantrill,” and warfare is never civilized (not even the “Civil War”), but aside from that, this is a good history of a terrible day. Quantrill led a bunch of unofficial Confederate guerrilla fighters in Missouri. They did not play by any set of rules. Lawrence, Kansas, had long been sympathetic to the Union, a center of anti-slavery advocates during the Bleeding Kansas era. Quantrill set out to punish the town's residents for supporting Union soldiers by crossing the state line and raiding the town, killing every man they could find (estimated at 150) and burning the place down. They escaped and were never punished, though Quantrill himself was killed in an ambush in Kentucky in 1865, still resisting a month after Lee's surrender. Long after Quantrill's death, some of his raiders gained even greater fame for similarly bad behavior – Jesse and Frank James as well as the Younger Brothers. This account was published in 1884. Priced at $750.

Quantrill's Raiders weren't the only miserable people to wreak havoc on Kansas. Next up, we have The Benders of Kansas by John T. James Attorney for the Defense in the Trial of the Bender Women at Oswego, Labette County, in 1889-1890. The Complete Story Facts, Not Fiction. The Bender women were no ladies, nor were the Bender men gentlemen. Exactly who the Benders were is unknown. They were identified as Ma and Pa, likely German immigrants because of their accents, and John and Kate. It was not clear at the time whether John and Kate were husband and wife or brother and sister. It now is uncertain whether any were actually related. The “family” came to Kansas in 1870 and set up an “inn” on a rural road. It consisted of two rooms, their living quarters and a room where guests could have a meal and stay the night. Some stayed for much longer, a few years until their bodies were dug up from out back. Around 14 people didn't leave the place alive, having been murdered and their possessions stolen. Once their secret was about to be revealed, the “family” took off. Ma & Pa reached a train heading north, Kate and John took one going south. What became of them is unknown, though rumors abounded and many claimed to have participated in their killings. The trial in which attorney James represented the two women came about after they were supposedly recognized after being arrested for larceny in Michigan in 1889. The women were taken to Kansas and held for a couple of months, but released for insufficient proof the two women were actually the Benders. Item 31. $4,500.

Item 47 is Charles Roe and Edward McClernand's Custer's Last Battle On The Little Big Horn, Montana Territory, June 25, 1876. You aren't going to find an account of Custer's Last Stand signed by General Custer himself, for obvious reasons. This is the next best thing. It is signed by his wife, Elizabeth. It was published in 1927, so the Indian fighter had been gone for over 50 years by then, but Elizabeth was still around. I have not read this book, but imagine it must be sympathetic to Custer. Elizabeth devoted her long widowhood to rebuilding her husband's tarnished reputation after his lopsided defeat, and it is unlikely she would have signed anything not respectful of her husband's memory. $1,250.

Item 105 is just a piece of a remarkable story: Fifteen Thousand Miles by Stage. A Woman's Unique Experience During Thirty Years of Path Finding and Pioneering from Missouri to the Pacific and from Alaska to Mexico, by Carrie Adell Strahorn, published in 1911. “Dell” was the wife of Robert E. Strahorn. Strahorn moved west from Pennsylvania in 1870 and after a brief attempt at being a cowboy, decided journalism was a better choice. He joined the staff of Denver's Rocky Mountain News, but also became a correspondent for the New York Times and other eastern newspapers. In 1876, he became embedded with General Crook's troops in the Great Sioux Campaign. He became expert with the rifle as well as the pen, and endured the terrible hardships of long marches through bitter cold and snow in winter, extreme heat and lack of water in the summer. For awhile, they had to eat their horses. Most of the time, he noted, was spent pursuing Indians, rather than actually fighting them. He reported the news of Custer's fall. In 1877, Strahorn married Carrie, and a week later, he accepted railroad magnate Jay Gould's offer to become the P.R. man for the Union Pacific. He accepted on the condition that Carrie be able to accompany him, hence this book. The two traveled around the West, producing reams of publicity to entice settlers from the East, who brought business to the railway. After his days as a P.R. agent, Strahorn got into the railroad building business himself, developed several towns (including Caldwell, Idaho), moved back east for seven years as an investment banker, and then returned west for more business ventures. He and Dell became very wealthy. She died rich in 1925, but he lost it all in the Great Depression. With financing from others, he got in the mining business in the late 1930's, though now well over 80 years of age, dying in 1944 at the age of 92. This book provides a look at the adventurous part of their exciting lives. $1,500.

Here are some more exciting adventures, though they may be a bit exaggerated: I've Killed Men An Epic of Early Arizona, By Jack Ganzhorn World's Fastest Man On The Draw. That claim makes you think that Ganzhorn was a bit over the top, as does the number of events in which he allegedly participated, though much of what he writes about is backed up by evidence. He writes about the Earp-Clanton feud in Tombstone, where he grew up, but his personal memories would be limited as he was less than a year old at the time of the legendary gunfight. However, he did serve in the military in the Philippines, about which he writes, and perhaps did kill a bunch of men in Mexico. He claims to have been in San Francisco during the 1906 earthquake, and to have met several notable western personalities. He later became an actor, appearing in several movies during the 1920's, and lived until 1956. Item 77, published in 1940. $750.

Old West Books may be reached at 719-260-6030 or oldwestbooks@earthlink.net. Their website is www.oldwestbooks.com