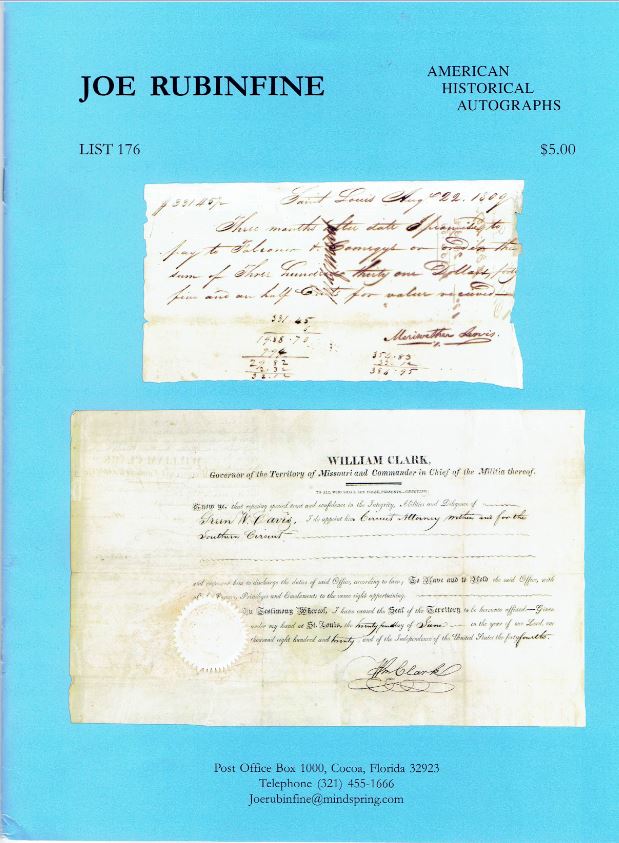 Joe Rubinfine has released his List 176 of American Historical Autographs. These are primarily signed documents by American political and military figures, though a few non-Americans (French who aided the American cause during the Revolution) and people from other walks of life can be found. Many documents contain the signatures of “signers,” those who signed the Declaration of Independence. Many military leaders from the Revolution have autographed material found herein, including a few who fought for the other side. Another major source of autographs are U. S. presidents, some signed as President, others before or after their terms in office. Here, now, are a few examples of these signatures.

We start with an item that is symptomatic of the downfall of one of America's great explorers, Meriwether Lewis. Lewis and William Clark led the famous expedition to explore the newly purchased Louisiana Territory in 1804. It remains America's greatest internal exploration. After it was concluded, Clark went on to have a long and successful career, as Missouri's Territorial Governor and later as Superintendent of Indian Affairs. Lewis did not fare so well. He was appointed Territorial Governor of Louisiana, but personal debts and accusations made against him led to a deterioration of his situation. In 1809, Lewis set out to Washington to explain his side of the story, but died en route from gunshot wounds. Most believe they were self-inflicted, though some think he was assisted by someone who wanted his money. Item 31 is a promissory note to St. Louis merchants Falconer & Comegys in the amount of $331.45 ½, signed by Lewis. It is dated August 22, 1809, less than two months before Lewis' death. The word “Judgement” has been written across the face of the note, likely meaning it was not repaid. Priced at $15,000.

William Henry Harrison built his reputation as an Indian fighter in the West (“Tippecanoe”), and during the War of 1812. After holding several public offices, he was appointed U.S. Minister to Gran Columbia in 1828 by John Quincy Adams. He got into a verbal battle with the country's leader and famed revolutionary, Simon Bolivar, and was replaced in 1829 after Andrew Jackson took office. However, he maintained connections in the area that comprised Gran Columbia, and he promised to use his influence to help the brother of former New York Congressman Gulian Verplanck make connections of his own. Harrison wrote to Gulian Verplanck in 1837 offering this assistance, and spoke politics as well as personal issues with the Congressman. While making two connections, Harrison writes that he knows more people in Columbia, but locating them now is too great an effort as “both my mind & body are in a situation very unfavorable to do any thing.” His mind was low because of “the situation of a beloved son whom an uncurable disease is hanging to his person,” while his body suffered from a “highly inflamed knee which is exceedingly painful.” The son was likely William Henry Harrison, Jr., who died at age 35 two and one-half months after this letter was written. However, Harrison's introductory sentence is the most interesting for its painful irony - “Your letter...found me suffering under a severe inflammatory rheumatism in the knee from having foolishly exposed myself to rain when under the operation of medicine for a previous cold.” Harrison's presidency is remembered for only one thing – it was the shortest in American history, lasting only a month. His death has long been attributed to his foolishly exposing himself to rain by giving a long-winded inauguration speech in the rain and freezing cold without being properly dressed (some scholars now believe that pneumonia, attributed to his inauguration exposure, was not the cause of his death). Item 42. $8,500.

Harrison's wife, Anna, who long suffered ill health and never even made it to the White House during her husband's brief tenancy, wrote this next letter on August 5, 1848. It is to her grandson, John Cleves Symmes Harrison, reminding him that he has promised to visit her. She tells him that at her age (73) it is too risky to put off a visit. She writes, “...you must remember, that I am very old, & as none of us know the time of our death, yet to one, threescore and ten of course, but a few Months, perhaps days are allotted to them.” We don't know whether J. Cleves rushed his visit, but it wasn't necessary. Anna Harrison lived another 16 years, passing away at the age of 88 in 1864. She outlived 10 of her 11 children. Item 44. $2,500.

Item 37 is a May 17, 1817 letter from newly inaugurated President James Monroe to his physician, Charles Everett. He writes about an expected visit from the doctor during the summer. Of note, he alludes to an important part of the reason for the success of his presidency and the “Era of Good Feelings” over which he presided. Writes Monroe, “I shall set out, on my tour, in the north & west, in a very short time, by the 25th if possible, but certainly by the last of the month.” Four of the first five American presidents, Monroe being the fourth, came from Virginia. There was unease in other parts of the country, and to alleviate these fears, Monroe set out on a tour of the rest of the country to reassure those people he served them as well. He was well-received, and it enabled him to lead America through perhaps its calmest and most conciliatory period of time. $3,000.

“Be it ever so humble, there's no place like home!” Those lyrics, from the song Home Sweet Home, are still familiar, almost two centuries after they were written. The writer was John Howard Payne, a playwright whose song, Rubinfine notes, “is all he is remembered for.” But for this, he, or at least his words, are well remembered. Payne penned out the lyrics to the song (written for an 1823 play) in 1851 for New York Congressman C. E. Clark. He also sent a cover letter, and here is another great irony. Payne had no such home, sweet or otherwise. As he writes, “...surely there is something strange in the fact that it should have been my lot to cause so many people in the world to boast of the delights of Home, when I never had a Home of my own, and never expect to have one...” To this, Payne adds a dig at federal officials (he served as American Consul at Tunis, an honor bestowed upon him more for his literary than diplomatic prowess): “...now – especially since those here in Washington who possess the power, seem so reluctant to allow me the means of earning one!” Payne wandered the world after the death of his parents at a young age. Most of his life was spent abroad, he never married, and he died in Tunis, his remains being disinterred and brought back to America 30 years after he died by a philanthropist who gave him an honored “home” in Oak Hill Cemetery in Washington. Item 61. $12,000.