A Variety from James Cummins Bookseller, Including Fine Bindings and Works by Churchill 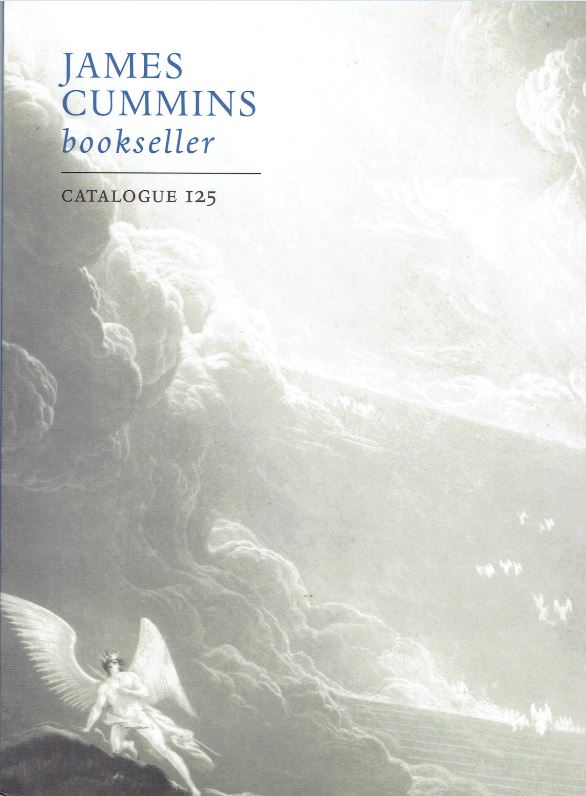 James Cummins Bookseller has reached a buck and a quarter with their latest selection, Catalogue 125. Cummins regularly provides a varied collection of books and other works on paper, connected not by subject but by quality. There is a mix of material, some notable for its textual content, others for its artistic attributes. This catalogue includes many items of notable bindings and fore-edge paintings, and a large selection of works from the prolific writer and English statesman Winston Churchill. Here are a few of the items offered.

We start with one of those outstanding fore-edge paintings, and a particularly appropriate one for the book offered: The Works of Percy Bysshe Shelley. Edited by Mrs. Shelley, published in 1847. It is bound with Shelley's Essays, Letters from Abroad, Translations and Fragments. Many fore-edge paintings feature beautiful scenes not particularly related to the book's content, but this one features the Thames at Eton on one side, and Florence on the other, both related to Shelley's life. In the middle, is an oval with a bust of Shelley within. The art was the work of Martin Frost, a contemporary master of fore-edge painting, who has initialed his creation. Item 11. Priced at $2,500.

This next piece is one of 19 items written by English Prime Minister and historian Winston Churchill. Churchill, who wrote an extensive account of the war through which he led his homeland, was never short for words. Item 21 is another such masterpiece: A History of the English-Speaking Peoples. It includes four volumes, and was published 1956-1958. Churchill began the work in the 1930's, but had to sideline the project while he led his nation through its darkest hour and improbable victory in the Second World War. Surprisingly, he was turned out of office shortly after the war ended, but he then embarked on writing his massive history of that war. He was recalled to the office of Prime Minister by the voters in 1951, retiring in 1955 at the age of 80. That afforded him time to finally complete and publish this book. $1,500.

Item 63 is an eyewitness account of one of the greatest tragedies in American history, the assassination of President Abraham Lincoln. It is one of only 7 eyewitness accounts written within 24 hours of the terrible event. The writer was a navy physician, Dr. George B. Todd, who met the President earlier on that fateful day, and also attended the play at Ford's theater that night. His account appears in a letter he wrote to his brother. Todd was surgeon on board the U.S.S. Montauk. Lincoln visited the ship that afternoon. “Yesterday about 3 P.M. the President and wife drove down to the navy yard and paid our ship a visit, going all over her, accompanied by us all. Both seemed very happy, and so expressed themselves, - glad that this war was over, or so near its end, and then drove back to the White House. In the evening nearly all of us went to Ford's Theatre.” Todd notes that he got there early so he could sit close to the President's box. The President received an enthusiastic hand from the crowd when he arrived, and as the play progressed, “I could see that the 'pres.' seemed to enjoy it very much.” “About 10:25” a man entered and walked slowly toward the President's booth, and Todd heard someone say “there's Booth.” The man took a card from his pocket and handed it to an usher, who took it into the President's box. A short time later, the door was opened and the man entered the President's booth. “No sooner had the door closed, than I heard the report of a pistol and on the instant, Booth jumped out of the box onto the stage, holding in his hand a large knife, and shouted so as to be heard all over the house -- 'Sic Semper Tyrannis' ('so always with tyrants') and fled behind the scenes. I attempted to get to the box but I could not and in an instant the cry was raised 'The President is Assassinated.'” Todd continues that “Some General” told him to go to the nearest telegraph office and inform the nation. Exactly who he telegraphed is not clear, but Todd says that “in ten minutes the sad news was all over the country.” If this is an accurate portrayal of what happened, then it was Todd who first informed the country of Lincoln's assassination. The letter was written on April 15, 1865, the day after the assassination, and Todd added a brief comment on April 24 that he has no time to write more “as I have been a detective.” This may refer to the fact that an autopsy was performed on Booth's body on the Montauk on April 27, and others believed involved in the shooting were taken to the ship to be held. As the ship's surgeon, it is likely Todd was involved in the autopsy of Booth. $65,000.