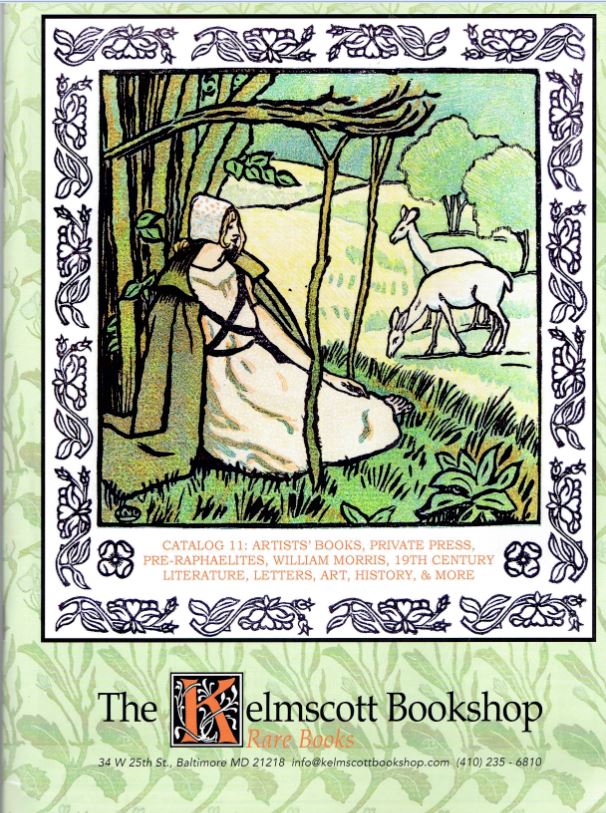 Catalog 11 from The Kelmscott Bookshop.

The latest from The Kelmscott Bookshop Rare Books is titled Catalogue 11: Artists' Books, Private Press, Pre-Raphaelites, William Morris, 19th Century Literature, Letters, Art, History & More. Many items are related to private and fine presses, natural enough for a bookshop named after the Kelmscott Press. Fine workmanship and artistic books are to be found throughout. There is also a wide selection of material from the 19th or turn of the 20th century - literature, history and more that will be of interest to the antiquarian. We will take a look at a few of the items to be found in this latest selection from the Kelmscott Bookshop.

First up is what Kelmscott notes is “the Arion Press's principal work.” That's no small compliment as many consider Arion the finest of the fine presses in America currently in operation. Arion Press was created in 1974 by Andrew Hoyem, sort of a successor to the legendary Grabhorn Press. Hoyem had gone into partnership with Robert Grabhorn after the latter's brother died, and formed Arion after Robert died. Item 3 is the Arion edition of Herman Melville's Moby Dick, published in 1979. William Everson described the work as “a feat of craftsmanship unexcelled in modern printing,” and it is one of three Arion works on the Grolier Club's list of the 100 most beautiful books of the twentieth century. Along with hand-set text in Goudy Modern, it features 100 engravings by Barry Moser. Moser is noted as being one of the best to ply the trade of wood engraved illustrations. He has not only signed the title page and written an inscription, Moser has either signed or initialed each of his illustrations, unique to this specific copy. Moser provided these signatures at the request of a personal friend who owned this book. The book was printed in a limited run of 165 copies. Priced at $20,000.

William Morris is known in the printing world as the founder of the most notable of all fine presses, the Kelmscott Press. It began work in 1891, and lasted only long enough to complete the projects Morris started before his death in 1896. However, Morris was also an important writer and artist, and was a deeply committed and politically active socialist. This next item was published just as Morris was embarking upon his career as a fine press printer, in 1891. It combines two of his other attributes – writer and socialist. Item 44 is Morris' News From Nowhere, his famous utopian novel. He wrote several fantasies late in life, this one containing a measure of science fiction in its ideal world. Not surprisingly, Morris' utopia is highly influenced by his socialist ideals, and his world is one without private property, where work is a pleasure and people are content. This is one of the 250 large paper copies of his book, published the same time as the trade edition (an unauthorized edition, taken from its serial version in Commonweal magazine, preceded it slightly). This copy is inscribed by Morris to his oldest daughter, Jane - “to Jenny with William Morris' best love April 4th 1891.” Jenny was in poor health and suffered from epilepsy, which brought her and her father particularly close to each other. $6,800.

The next book lists its author as “Johnston Smith,” but that was a pseudonym. It was actually the first novel of Stephen Crane. Crane had written numerous short stories and poems, and worked as a journalist, but Maggie. A Girl of the Streets was his first full-length work. Crane was only 22 at the time, but it is good that he started early, as he contracted tuberculosis and died at the age of 28. It drastically cut short a career that was amazingly influential for such a limited run. Crane's style was realistic and fatalistic, with Maggie, the immigrant factory worker, unable to rise above her lot in life and dying at an early age. Crane had his first book, published in 1893, printed in 1,100 copies at his own expense. He sold only two. Others he gave away, but most must have been discarded as only around 35 copies are known to survive. Item 88. $12,000.

Shakespeare is known for his plays and sonnets, but this next item celebrates his flowers: Shakespeare's Flowers: Quotations from His Plays with Illustrations from Old Herbals. Jan Kellett is the artist and compiler who combined flowery quotes from Shakespeare with hand-colored woodcuts of floral illustrations based on old herbals. Kellett, and De Walden Press which publishers her works, create miniature books, this one being 2” x 2 1/2”. Additionally, this is an accordion style fold-out. The binding is blue leather with gilt floral ornaments. Item 16. $525.