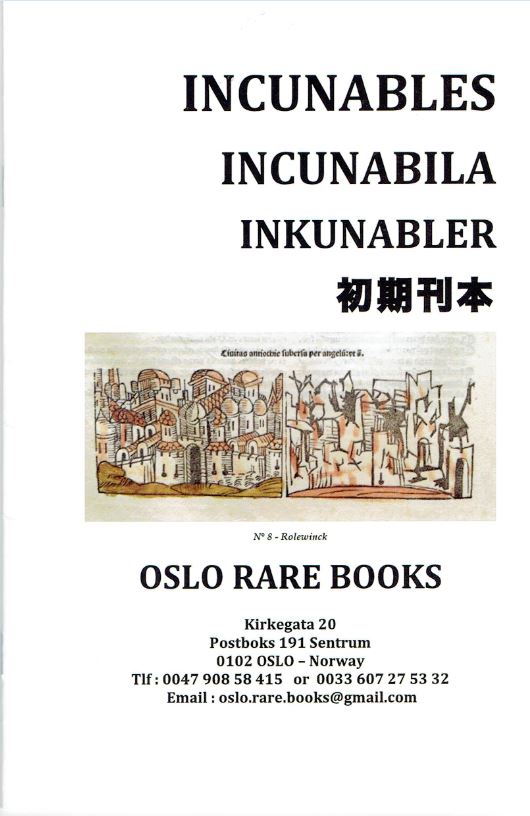 We recently received our first catalogue from Oslo Rare Books, of Oslo, Norway. The title is Incunables, which is to say these are books over 500 years old. There are 14 items offered, and all, save one, is an incunable. The “new” book dates to 1508. Despite their location, the catalogue is not written in Norwegian. The bookseller has a French connection, and as such, though several languages appear, it is primarily written in French. This will not be easy to describe for one with very limited knowledge of French, and even less of the Latin and other languages in which these books were written. Still, collectors of incunabula likely have better knowledge of Latin and old versions of Romance languages, so perhaps you will recognize these very early printed works. Here are some samples.

We start with a history of Florence, though certainly not a recent history. Item 2 is Historia Fiorentina di Messer Poggio. This history covers the years 1350-1455. The author was Poggio Bracciolini, who lived from 1380-1459. Poggio was a scholar and humanist, who spent most of his adult life in the employ of the Church. Most of his books were more philosophical and moral in subject, but he had come to Florence for his education and decided to write a history of the city. He is perhaps even better known for his role in tracking down ancient manuscripts, lost in various monasteries around Europe, and bringing them back to life. His most notable find was De rerum natura by the first century Roman poet and philosopher Lucretius. It recounted the even earlier teachings of the ancient Greek philosopher Epicurus. This work would play an important role in Renaissance thought. Poggio found the only extant copy of this work in a German monastery. Through his life, Poggio served under six popes and one anti-pope. He wrote his history in Latin, but this 1476 printed edition was translated into Italian by his son, Jacopo Poggio. Priced at €12,000 (euros, or approximately $14,884 in U.S. dollars).

This next book is another history from part of today's Italy, but from much longer ago: Antiquitates Romanae. This is a history of very ancient Rome, written shortly before the year Zero by Greek historian Denys Halicarnaseus (Dionysius Halicarnassus). Halicarnassus spent many years in Rome studying its history and language, with hopes of convincing his fellow Greeks that their conquerors were not such bad people after all, and shared a noble, ancient history. This book traces Rome's history from its mythical, prehistoric days to the First Punic War, which ended in 241 BC. Halicarnassus' history was translated by Lampo Birago, an admirer of ancient Greek culture and a translator for the papal curia. It is believed he translated this work in 1469 at the behest of Pope Paul II. This book was printed by Bernardin Celerius in 1480. Celerius had presses in several Italian cities during his printing career, this being one of the very few books he printed in Treviso. Item 6. €22,000 (US $27,238).

Here is the “new” book in this catalogue, Speculum naturalis coelestis & propheticae visionis, published in 1508. This is an occult work, a set of prophetic visions based on astrological signs by Joseph Grunpeck, published in Nuremberg. Grunpeck is perhaps better known for his two books on the connection between astrology and the “French disease” (syphilis). Evidently, he could see all sorts of things in the stars. In this book of prophesy, Grunpeck foresaw all sorts of terrible things including destruction of the social order, overthrow of the government, and disintegration of the Church. It may have been this latter prophesy, along with his belief in the occult, that got this book placed on the index of books proscribed by the Church. This work is highlighted by 13 woodcuts created by Wolf Traut, an assistant to Albrecht Durer at the time. Item 14. €10,000 (US $12,387).

Item 4 is another work written well before the time of printing: De la Cita d'Dio (the City of God). The author was Augustine of Hippo (St. Augustine), who wrote this treatise on numerous theological issues early in the fifth century. This edition is undated and without a named location, though some sleuthing has placed it as being printed in Venice between 1476 and 1478. The printer was Antonio di Bartolomeo Miscomini and it was originally believed to have been printed in Florence, but notations in one copy and watermarks indicate it came from Miscomini's earlier press in Venice. This was the first edition translated to the vernacular Italian. €22,500 (US $27,872).