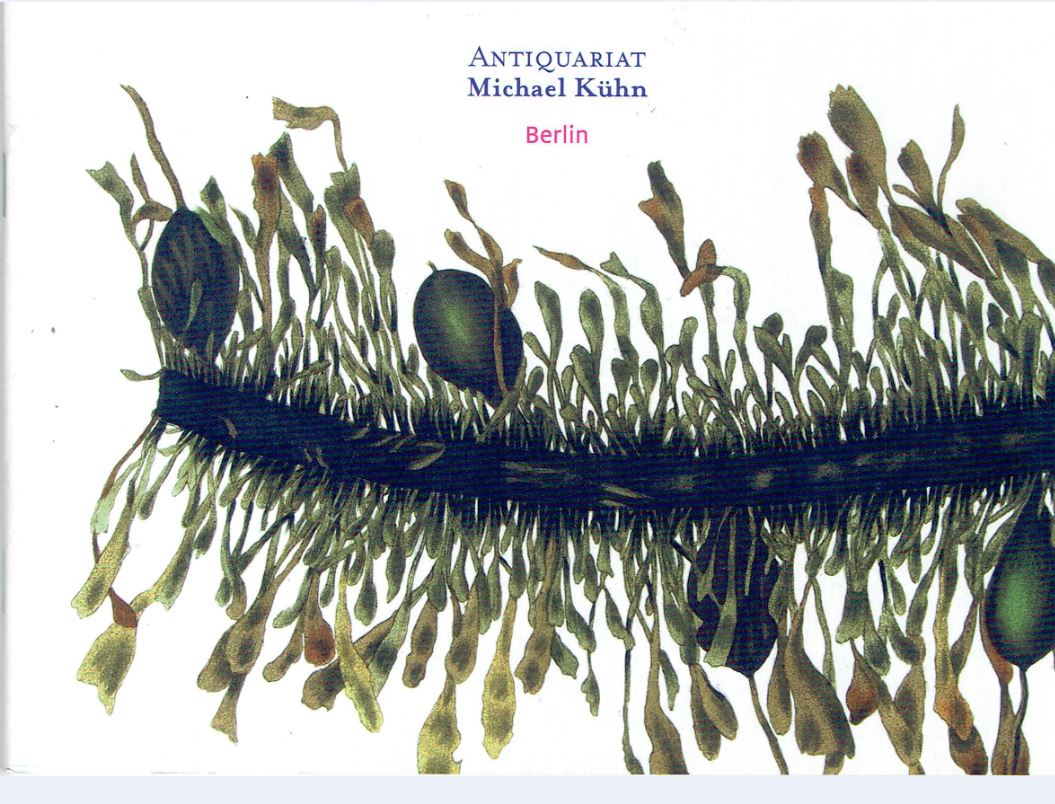 Antiquariat Michael Kuhn has issued a catalogue that has no name. Other than the bookseller's name, the only word offered is “Berlin,” which tells us where they are located, but not the subject matter. However, that city does imply the books are European in origin, and the “Antquariat” of the bookseller's name tells us that they are mostly very old works, 19th century or earlier. Here is one more thing that a reading of the catalogue reveals: this is mostly a selection of scientific works. There are a few exceptions, such as the memorial to Martin Luther's house. A few works are primarily musical, though they focus on more scientific aspects, such as harmonics. Here are a few of the items to be found in this latest selection from Berlin.

We probably shouldn't start a collection of serious scientific works with a fraud, but the fakes are generally the most entertaining. This book is titled Reise durch einen theil der Vereinigten Staaten von Nordamerika in den Jahren 1844 bis 1846. (Travel to parts of the United States of North America in the years 1844 to 1846). The author was the native German Albert C. Koch, and what he found in America was unbelievable. Nonetheless, many were tricked into believing him. Koch immigrated to St. Louis in the 1830's, where he set up a museum near today's Gateway Arch. He was interested in natural history, and gathered many specimens. However, he was also a promoter in the P. T. Barnum mold, meaning accuracy and truth were not limitations on what he presented. He soon sold his museum and hit the road. He took time off to hunt for fossils, primarily in Missouri, to display, which led to the piece de resistance of his traveling show, which he brought to Europe. It was the “hydrarchos.” Koch collected the fossil bones of what we now know as basilosaurus, a type of whale that lived 40 million years ago. He cheated. Koch strung together the bones of at least 6 basilosauri so as to make the creature much longer than it actually was. His creature stretched 114 feet (he further exaggerated claiming it was 140). Nor did Koch even limit himself to basilosaurus bones, adding some ammonite shells for added effects. Despite confrontations from legitimate scientists, Koch's show went on until he sold his specimens. Priced at €2,200 (euros, or approximately $2,761 U. S. dollars).

Next we have a collection of steroscopic views from Les Eyzies in the Dordogne department of southwestern France: Station prehistorique de Laugerie Basse et Grotte du Grand Roc, undated but early 20th century. This is an area of caves filled with magnificent mineral structures. What is even more remarkable about these caves is they are home to some of the earliest examples of human artwork, surprisingly good depictions of animals that lived in the area, drawn by Cro-Magnon man 12,000 years ago. €5,200 (US $6,518).

This item has a long, multilingual title: Fuci, sive, Plantarum Fucorum generi a botanicis ascriptarum icones descriptiones et historia... / Fuci, or, Colored figures and descriptions of the plants referred by botanists to the Genus Fucus... The work was long enough to deserve such a long title, four volumes published 1807-1819. The author of this massive botanical set was Dawson Turner, a banker. That was his day job, anyway. Turner was also a botanist and antiquary, with a particular interest in cryptogamic plants (those that reproduce by spores rather than seeds). This book is focused on seaweed, and contains descriptions and images of many newly discovered species, particularly of those brought back from the new English colony of Australia. This set was published in small numbers at Turner's expense. Fortunately, he received a large inheritance which allowed him to carry out and publish his work. €7,800 (US $9,778).

From sea plants, we go to sea animals that look more like plants: Die Synascidien der Bucht von Istrien (the Ascidians of the Bay of Istria), Istria being located in Croatia. This is the work of Richard von Drasche, published in 1883. Ascidians are commonly known as sea squirts, as they will squirt water when removed from the sea. They aren't removed easily, though some live in the intertidal zone where they can be partly exposed. Sea squirts are those things that look like plants, often pretty flowers, that attach themselves to a rock or some object, with root-like appendages which even more give them the appearance of plants. For the first day or two of their lives, they swim around like tadpoles, but once they find a landing spot, they attach themselves there for life. Evidently, they are not easily bored. They are fairly rudimentary creatures, though they are considered more like us than just about any other invertebrate animal. The author of this work was an industrialist, another man with sufficient funds to be able to support his own research. The book contains numerous plates depicting the variety of these little creatures. €1,200 (US $1,505).

Next up is Descrizione delle ultime eruzioni del Monte Vesuvio (Description of the last eruption of Mount Vesuvius), by Andrea Pigonati. This is not actually the last eruption of Vesuvius, but was the latest at the time this book was published – 1768. It erupted in 1767, but has continued to do so many times since. Visitors beware. The author was an officer in the Corps of Engineers for Naples. He was involved in such tasks as cleaning up ports, while he also developed an interest in remnants of antiquity he found. However, he visited Vesuvius at the time of the the 1767 eruption, and being a writer, he prepared this account of what he saw. €1,600 (US $2,007).