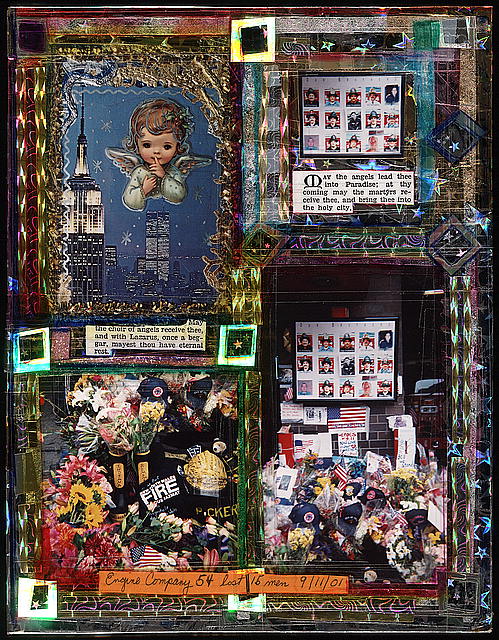 The next material type is “Posters” which contains the obvious. One of these – a color offset lithograph by Brian Niemann called “In Memory 9/11/01” shows the twin towers with an American flag behind them, the words, “In Memory 9/11/01” printed somberly in white on a black background at the bottom. This is the same image that the curators have chosen for placement on the opening page of the show. The next materials section, “Fine Art,” contains a medley of various fine art objects created in tribute to 911: a prayer rug in red, white, and blue; woodcuts in homage to the 911 workers; and a pastel by Danna Levinstone called “Almost Gone” which is an eerily realistic black and white drawing of the towers covered in giant smoke clouds, the tops of one tower barely visible and apparently just at the point before collapse.

The next materials section, perhaps the most unexpected one for me, is “Comics.” This consists mostly of multi-panel graphic novels or novellas which tell the story of people learning about the tragedy from a variety of perspectives. These multi-page “comics” (more like “tragic-comics”) have the distinct disadvantage of having panels that are difficult if not impossible see specifically, at least on my computer terminal, a frustrating disadvantage as many of them looked promising just from the few panels I could barely make out. The next materials section is called “Max Protetch” and consists of wood sculptures, digital prints, and an assortment of other materials. Then there is a most tantalizing section called “Audio Recordings” which consists or oral history interviews with rescue workers, witnesses, and survivors; alas as I have no speaker component to my computer system this section went unheard by me, though I’m sure that it’s a rich and powerful one.

There are four remaining sections, which I’m going to discuss out of order: “Area Studies/Overseas Operations,” which consists of reactions from abroad, abroad including Bengal, Brazil, and other non-US sites; “American Folklife Center,” which includes art by schoolchildren including drawings of the towers crying (entitled “I Can’t Take It”) and one in which the Statue of Liberty assures an American eagle that everything is going to be okay; “Geography and Map,” furnished by the New York City Office for Technology and EarthData International, which consists of maps of the devastated area before and after; and finally, “Rare Books and Special Collections,” which remarkably enough contains only one object, a handmade book by Kitty Caparella, who is a reporter and artist living in Philadelphia. The book’s description reads: “…Entitled The Message, the unopened volume is a three-inch square silk book, tied by a muslin sash. The book is designed to be opened slowly, revealing a swastika shape formed by the red-smeared faces of terrorists with an image of the bombed World Trade Center buildings at the center. The printed faces are painted with watercolor and acrylics, and a Middle Eastern design is stamped on the back of the mug shots.” Only two images of the book – presumably the front and the back covers – are reproduced on the exhibit’s website.