Personal Accounts of Historic Times from the William Reese Company 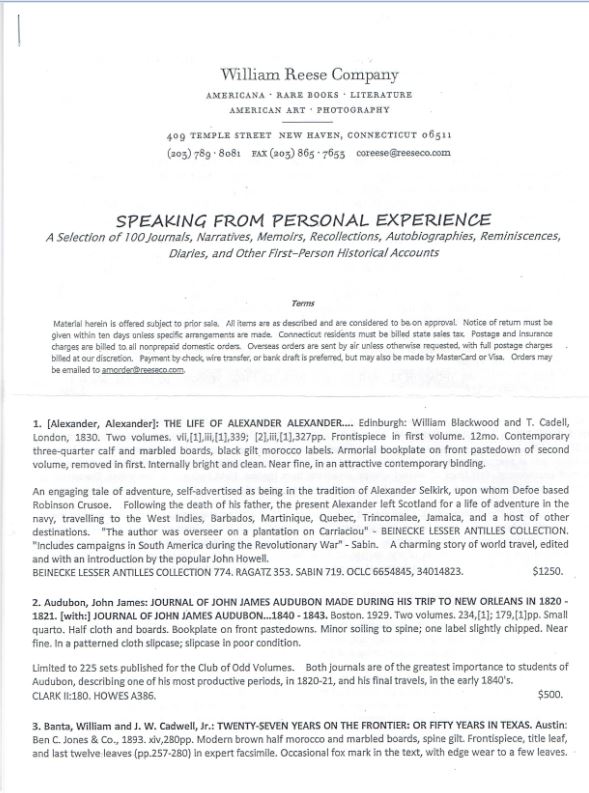 The William Reese Company has issued a list of 100 items, Speaking from Personal Experience. A Selection of 100 Journals, Narratives, Recollections, Autobiographies, Reminiscences, Diaries, and Other First-Person Historical Accounts. While the names of a few of the writers are well known, most will be unfamiliar. However, while the writers may be obscure, they lived exciting lives in extraordinary times. They provide a window on important events mainly from the 18th and 19th century. Most of these accounts relate to the development of America, from the revolution to the later great westward migration. Others pertain to events overseas, or to journeys by sea rather than across the North American continent. Here, now, are a few of these accounts from personal experience.

We start with an exciting adventure, though certainly not a pleasant one. Item 57 is A Narrative of the Mutiny, on Board the Ship Globe...Jan. 1824. And the Journal of a Residence of Two Years on the Mulgrave Islands; with Observations on the Manners and Customs of the Inhabitants... Among the not very good manners of the inhabitants was the killing of all of the Globe survivors still on the islands except the two authors of this book, William Lay and C. M. Hussey. However, in fairness to the islanders, the mutineers were not polite guests which may explain the hostile reaction. The Globe was an American whaler, sailing Pacific waters when several crew members mutinied and took over the ship. They killed the Captain and three other officers, forcing the crew to follow their orders. The mutineers quickly hung one of their own they didn't trust, and after landing the ship on an island, killed their own leader. Six of the crewmen were later able to sneak off on the Globe and seek rescue in Chile, while the remaining crew and mutineers alike were killed by the natives, save for the authors, who were rescued the following year. Priced at $1,500.

Here is another exciting, and comparably miserable adventure, by an angry and bitter participant. Item 38 is the Journal of the Texian Expedition Against Mier; Subsequent Imprisonment of the Author; His Sufferings, and Final Escape from the Castle of Perote, by Thomas J. Green, published in 1845. In the Republic of Texas days, despite Mexican leader Santa Anna's agreement to give the territory its independence, he initiated harassing attacks in hopes of regaining the land. One such attack led to the Dawson Massacre, which forced a reluctant President Sam Houston to order a retaliatory raid. Houston's reluctance was based on his fear that the Mexican army was too strong, but he finally found it necessary to authorize Alexander Somerville to put together a troop of volunteers to act in what was then disputed territory between the Nueces and Rio Grande Rivers. Somerville captured Laredo, but sharing Houston's fear of a looming disaster, ordered his troops to disband and return home. Many were unhappy with the order. Instead, several hundred organized an unauthorized attack on the town of Mier, on the Mexican side of Rio Grande. While inflicting heavy casualties, the Texians were way outmanned and had to surrender. There followed a long forced march to prison, a temporary escape, and an order from Santa Anna that all of the escapees be killed. Foreign emissaries helped convince Santa Anna to withdraw the order, but instead, he had one in ten randomly selected prisoners shot. Green survived, eventually escaped, and later the remaining prisoners were freed through diplomatic efforts. Still, Green carried a heavy grudge. Houston, who did not approve the unauthorized attack on Mier, reportedly admitted to a British diplomat that since the action was unauthorized, the men were not legitimate prisoners of war. It was more like a filibustering action. This got back to the Mexicans, in effect legitimizing treatment of the prisoners as criminals rather than prisoners of war. Houston denied the claim, but Green believed it, and his vitriol toward Houston was legendary. He blamed Houston for the deaths of those prisoners who did not survive. Houston later told the U. S. Senate that the Library of Congress copy of Green's book should be “expelled thereform, and given to some of the sewers of the city.” $1,500.

Green undoubtedly loved Texas, but Erasmus Manford was less impressed. Manford was a Universalist minister who traveled around what was then the West for many years, eventually reaching Texas in the Republic days. He wrote about it in Twenty-Five Years in the West, published in 1867. He spent much time in New Orleans, but was evidently shocked by the immorality he found in Texas. He described Sam Houston as “a good talker but an awful swearer,” and described the then capital city of Houston as “a moral desert – a hell on earth,” where “vice of most every name and grade reigned triumphantly.” Item 58. $200.

Now it's time for some pleasant memories, though this writer had to look the other way to avoid the unpleasantness that surrounded him. Item 94 is Jottings of a Year's Sojourn in the South; or First Impressions of the Country and Its People, by A. De Puy Van Buren, published in 1859. Van Buren was a teacher from Michigan who spent a year in the Mississippi Delta region. He was accepted by and spent much time with the wealthy local plantation owners. The result is he gives us a look at the idealistic world of the privileged few of the antebellum South. Van Buren was not unaware that there was another side to southern life, but he deliberately evades the subject. In his preface, Van Buren notes, “...we have certainly written with perfect disregard to political prejudice, as if Slavery did not exist in our Southern Border. We are not like Iago - 'Nothing, if not critical.'” He writes only of the positives, with which he was quite smitten. $500.

We will let the title of this next book serve as its description. Published in 1843, it says it all: The Life and Adventures of Seth Wyman, Embodying the Principal Events of a Life Spent in Robbery, Theft, Gambling, Passing Counterfeit Money, &c. &c. Written by Himself. Wyman died shortly before the book was published. Naturally enough, he died in prison. $2,000.