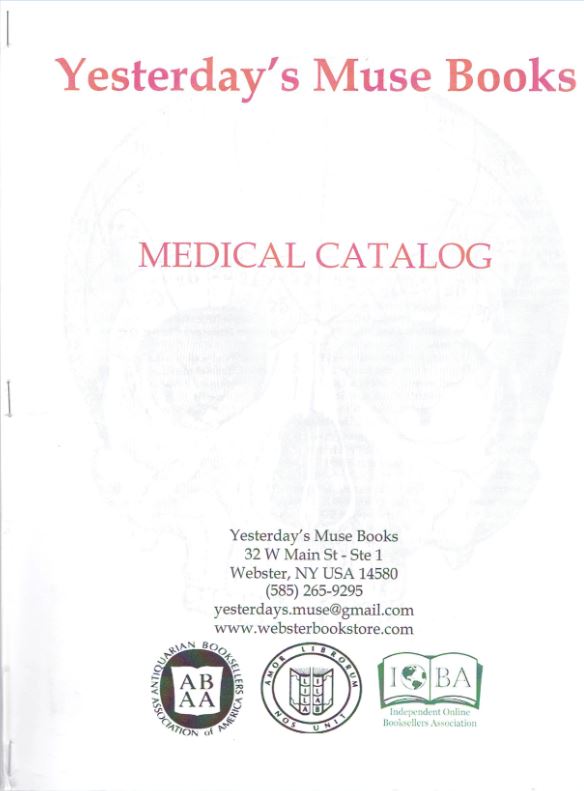 Yesterday's Muse Books has issued a Medical Catalog. First a word of warning – use this for collecting and historic research. Don't follow the advice of the books herein. The greatest concentration is 19th century medical texts, and their recommendations are not likely to work much better today than they did when the average lifespan was 40 years. There was little understanding then of what caused illnesses, making cures very hard to come by. Standard therapy entering the 19th century was an unholy triad - “bleeding, puking (puke weed) and purging.” More physicians were starting to conclude that this was not very effective. Still, with antibiotics, even sulfa drugs, a century away, many turned to various vegetable compounds and the like, less harmful, but equally ineffective. This attempt at an alternative resulted in the explosion of patent medicines, ineffective placebos that did little but make a lot of money for their merchants. It is in this environment that most of these medical guides were written, most well meaning, some actually providing good advice, perhaps accidentally, such as healthy diets and exercise. Here, now, is a look back at medicine as it was.

In the days before there was much in the way of systematic research, people tended to make up medical theories that sounded reasonable to them, even if they had no basis in fact. Item 15 is An Inquiry into the Cause of Natural Death, or Death from Old Age, by Homer Bostwick, published in 1851. Bostwick believed life was a series of physical degradations, concluding in death. The cause, he concluded, was “calcareous earthy matter,” more specifically, phosphate of lime (calcium phosphate). Therefore, the secret to youth and good health was to avoid foods containing this substance, such as salt, grains, certain food additives, river and spring water. However, Bostwick did stumble into some good advice as he recommended eating more fruits, vegetables, fish and fowl, foods much better than what the average American consumes today, though his reasoning was to avoid “calcareous earthy matter.” Priced at $125.

Item 81 gives us a look at the movement away from the harsh “remedies” of the early 19th century to more gentle, herbal solutions: New Guide to Health; or Botanic Family Physician, by Samuel Thomson, the third edition published in 1832. Thomson was a self-taught medical man, developer of what became a popular system known as “Thomsonian Medicine.” Like Bostwick, he liked vegetables, but prepared into herbal remedies as opposed to meals. Thomson developed his remedies after his wife nearly died from typical medical treatment of the day. Ultimately, Thomson would be roundly attacked by the medical establishment, and his cures were not medically effective, and yet he did contribute to the advancement of medicine by throwing light on the miserable practices of the day. American National Biography describes his contributions thusly: “The significance of his work is not in any contribution to medical science but in the strong influence he created against the prevailing practice of the day, in which bleeding, calomel, and opium were the ruling remedies.” $250.

The other point of view was expressed by Caleb Ticknor in 1838 in A Popular Treatise on Medical Philosophy; or, An Exposition of Quackery and Imposture in Medicine. Ticknor was a physician, and believed in the value of traditional medicines. This is not to say he was against vegetable medicines, but believed that scientific testing of efficacy was required, and pointed out that herbal medicines, if abused, could be just as dangerous as chemical medicines when abused. Ticknor was free in using the term “quack” to describe those who advocated unproven patent medicines. Item 83. $95.

We certainly would not want to put this next item under the heading of quackery. No, not at all. Item 9 is Baunscheidtismus or the New Curing Method, Improved by Dr. J. Firmenich... published in 1862. If you aren't familiar with Baunscheidtismus, let alone know how to pronounce or spell it, it is because the practice does not appear to be in vogue these days. Its developer, Carl Baunscheidt, was not a doctor. He was more of an inventor, though of dubious merit. One day, a swarm of gnats alighted on Baunscheidt's arthritic hand, several biting him. He noticed the arthritic pain went away. That was all Baunscheidt needed to come up with a medical explanation, and a device to mechanically perform the gnats' cure. He concluded that the openings in his skin caused by the bites enabled the “morbid accumulations” causing his pain to escape his body. So, he invented a device called the lebenswecker (life awakener) to serve as artificial gnats, so to speak. It consisted of a series of sharp needles in a spring loaded mechanism. Set if off, and the needles stabbed the patient, creating the necessary openings to let the bad stuff escape. He then poured a toxic oil on the wound, which caused it to become irritated and blister, as the oozing was a sign of the poisons leaving the body. This, he concluded, was similar to the healing action of the poison in the gnat bites that cured him. Firmenich, explains that “Baunscheidtismus desires to deliver the world from the errors and abuses of the old faculty of physic...” Sadly, it introduced a new series of errors and abuses. $150.

A medical book not published until 250 years after it was written is likely to be out of date, but this one is very interesting anyway for its historical value, both as a look at colonial America, and the thinking of its author, perhaps the most important American theological figure before the Revolution. Item 56 is The Angel of Bethesda: An Essay upon the Maladies of Mankind. It was written by Cotton Mather from 1722-1724, and while excerpts were published at the time, this is the first edition of the complete work, published in 1972. Cotton Mather was a major religious figure, his reputation forever tarnished by his tacit approval of the Salem witch trials. However, his interests ranged far and wide, and medicine was among them. His work was long ignored as it mixes religion and the occult with medical science. As the book's jacket notes, “Mather's remedies were a mix of the bizarre, benign and beneficial.” It should be noted that while Mather's background was not ideally suited for medical advice, he was an early, vigorous proponent of a very controversial procedure at the time – inoculation for smallpox. It would take most of the remainder of the century for people to become convinced, but Mather was medically correct on this one. $30.

This next book is of some note, though not so much for its medical breakthroughs. Item 75 is The Theory and Treatment of Fevers by John Sappington, published in 1844. Sappington criticizes the bleeding and purging of other doctors at the time, and instead recommends “vegetable alkaloids” to cure fevers. Sappington also just happened to make some pills containing these substances. However, Sappington's remedy was actually somewhat effective, unlike the typical patent medicine, as he used quinine, a natural medicine that does help. What makes Sappington's book particularly notable is that it was printed in Arrow Rock, Missouri, and is generally regarded as the first medical book printed west of the Mississippi. $175.