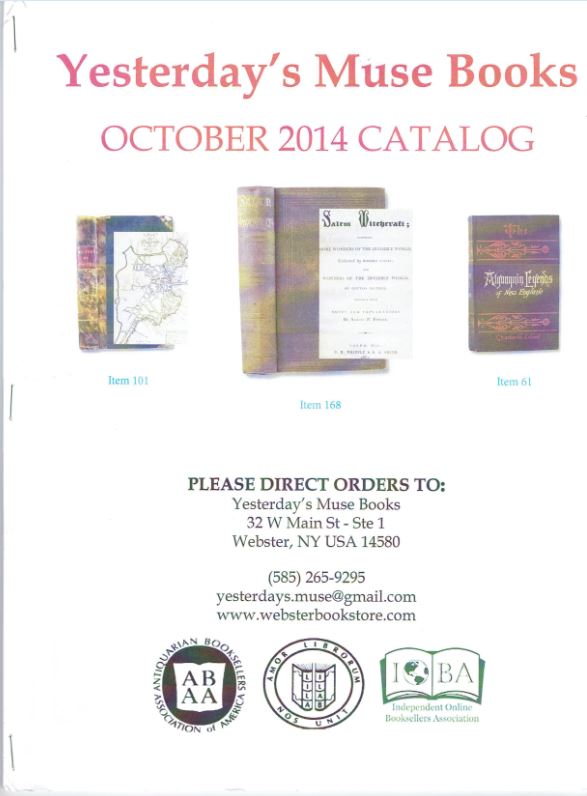 Yesterday's Muse Books prepared a catalogue a short time ago headed October 2014 Catalog. In the antiquarian book trade, two months ago counts as new. While the catalogue does not have a specific topic, we can tell you that 127 of the 171 items are listed under the heading “Americana.” Of these, they focus primarily on early English settlement. So, the largest concentration is concerned with the Plymouth colony, which then spreads out to items elsewhere in Massachusetts, and then to New England, and finally, to a few items from points in America farther away. Almost all of the items pertain to colonial times. The remaining 44 are a complete mix, a miscellany of just about anything that can be found in 44 items. Here are a few of the books to be found in this selection.

We start with an important account of the founding and early years of the Plymouth Colony by their most significant leader. Item 106 is the Collections of the Massachusetts Historical Society. Vol. III of the Fourth Series. It includes Bradford's History of Plymouth Plantation, Now First Printed from the Original Manuscript. Though published in 1856, two centuries after Governor Bradford died, it is the first printed appearance of Bradford's narrative, written from 1630-1647. Bradford had become a follower of the reformers turned separatists while still a boy in England, and barely reaching adulthood, joined them when they moved to Holland for religious freedom. When the decision was made to move to America, he was one of the first group, sailing on the Mayflower. He helped choose Plymouth for the first settlement. Due to his natural leadership qualities, when the colony's first governor, John Carver, died only a few months after their landing in Plymouth, Bradford was chosen to succeed him. He would continue to serve as Governor for most of the time from 1621 until his death in 1657. In his account, Bradford describes the years in Holland, the difficult crossing on the Mayflower, the terrible first winter when half of the settlers died, the help from local Indians that saved their lives, and the later development of the colony. Bradford's manuscript was lost during the American Revolution, being located years later in London. Priced at $495.

Item 102 is a biography of a man similarly important to the new colonists. William Brewster was a generation older than Bradford. It was in Brewster's home in Holland that the young Bradford lived until receiving an inheritance at the age of 21. Brewster was the only member of the Separatists with a university education. In Holland, he operated their printing press, turning out religious tracts. Brewster also traveled with the first group of settlers on the Mayflower. As the Pilgrims had no minister with them, Brewster served as the colony's religious leader until the first pastor arrived in 1629. Brewster also was an important adviser to Gov. Bradford, surviving until the year 1644. Item 102 is Chief of the Pilgrims: or, the Life and Time of William Brewster, Ruling Elder of the Pilgrim Company That Founded New Plymouth... published in 1857. $295.

Item 9 is a history of the Plymouth colony by Francis Baylies, published in 1830: An Historical Memoir of the Colony of New Plymouth, four volumes covering various time periods from 1620 – 1691. This covers the period from the founding of the colony to its annexation into the larger Massachusetts Bay colony. This copy contains the notation “Jane E. Brewster from her brother Henry C. Brewster. Christmas 1919.” The Brewsters were direct descendants of founder William Brewster. $295.

The Pilgrims had the misfortune of landing in Plymouth during a particularly harsh winter. However, it was not the only tough winter, while others have been mild and gentle. Here is a chance to learn about them all for those first two centuries. Item 63 is Early American Winters, 1604-1820 by David M. Ludlum, published by the American Meteorological Society in 1966. $35.

Cotton Mather was the most important religious figure in New England during the first quarter of the 18th century. Third generation in the line of the preaching Mathers, he was essentially a moderate between more fundamentalist and reformist theologies of the day. Despite a notable career, he is likely most remembered today for his tacit approval of the horrific Salem witch trials. His biblical understandings led him to believe there were evil spirits out there, and who was more likely to be one than some old hag who acted like a witch? Three decades later, Mather preached his last sermon, a remembrance of another man of God: The Comfortable Chambers, Opened and Visited, upon the Departure of That Aged and Faithful Servant of God, Mr. Peter Thatcher, the Never to be forgotten Pastor of Milton, Who made his Flight thither, on December 17, 1727. Cotton Mather would make his own flight thither just two months later. This last sermon was published in 1796. Item 67. $175.

Lincoln may have emancipated the black slaves, but evidently not the white ones, according to this book by Guy Fitch Phelps, published by the Christian Witness Co. in 1913: Seventy Traps of White Slavers by Which They Trap Girls. Phelps makes some stunning revelations, such as there are more than 700,000 white slavers in the U.S. and they are as thoroughly organized as Standard Oil. The head man is known as the “Big Chief,” and they execute those who violate their rules. There are clearing houses where girls, average age 17, are bought and sold, prices ranging from $3.50 - $1,000. These girls can be found at places like dance halls (not surprising) and ice cream parlours (huh?). Item 166. $35.