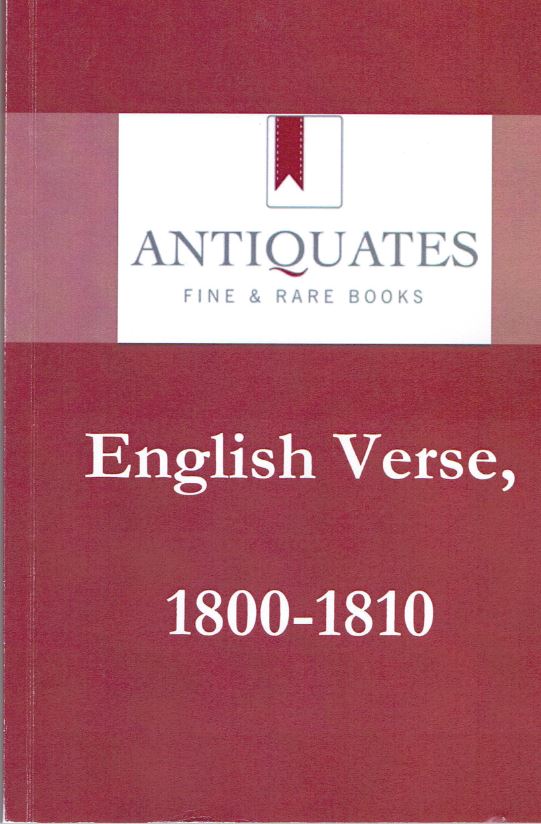 Antiquates Fine & Rare Books has issued a catalogue with a very specific niche – English Verse, 1800-1810. I don't know whether the first decade of the 19th century was more notable than most for its English poetry, but it certainly was a prolific time. There is a lot of verse in this catalogue - 232 items to be exact – with the explanation perhaps being that most of these works come from the collection of James O. Edwards. Mr. Edwards was an even more prolific collector than these poets were writers.

Don't expect to know most of the poets who have contributed to this collection. There is an occasional name you will recognize, like Walter Scott, but these pages are filled with authors who are not exactly household names. One wonders if some were even names within their own households. Very few were full-time poets. Most had day jobs, but enjoyed expressing themselves in rhyme during their leisure time. Some were quite good at it, others mediocre to terrible. Edwards did not discriminate against the mediocre in his collecting. The result is this catalogue is filled with rare material, much, we are confident, not to be duplicated any time soon. This is likely a once-in-a-lifetime opportunity to snare some of these works.

Many of the poets were clergymen. Apparently, clergymen are frustrated poets, or just want a chance to express themselves on non-theological issues once in awhile. Their subjects are rarely the same as those of their day jobs. Issues of the day often arise, with much of it being mocked in satirical verse. In other cases, the poems are serious, such as several dealing with the enormous issue of that time – slavery. Here, now, are a few samples of that early 19th century English verse offered in the latest Antiquates catalogue.

We start with an author who was very popular at this time, though not for his writing or poetry. William Henry Bunbury was a caricaturist, whose gentle satire avoided controversial political subjects. Still, his drawings were entertaining and gained him a large following. In item 35, he takes a stab at poetry, though like his caricatures, it is in good fun: Tales of the Devil, from the Original Gibberish of Professor Lumpwitz, published in 1801. At the time, there was a fad for horror poetry, which Bunbury targets for his satire, both in sketches and in rhymes. Priced at £250 (British pounds, or about $396 in U.S. dollars).

Sometimes, satire can get you in trouble. Edward Goulbourn published such a piece in 1805: The Bluviad. A Satyrical Poem. Goulbourn was a cavalry officer with the Royal Regiment of Horse Guards, also known as “The Blues” for their uniform colors (hence the name of this mock epic poem). His poem satirizes the character and actions of his fellow officers. While actual names were not used, it was evidently not that difficult to figure out whom the fictional characters represented. Goulbourn was sued for libel and forced to resign his commission. However, he would go on to have a long career as a lawyer and judge. Item 81. £125 (US $198).

This next poet is very well known, but for all the wrong reasons. William Henry Ireland wrote many poetical works in the early 19th century. Based on critical comments, it was mediocre at best. However Ireland's fame, or infamy, is attributable to the works he produced in the previous decade. Ireland was a master forger. His father, Samuel Ireland, was a major Shakespeare collector, and William may have started creating forgeries of minor documents to please his father. However, his creations expanded to manuscripts, plays with Shakespeare's forged annotations on them, and finally, to a new Shakesperean play which he created and had performed. It ran for one performance. The critics were unimpressed. Ireland's claims quickly unraveled and he was forced to admit it was all a ruse. A few years later, Ireland would try to redeem himself, as well as make a living, through his poetry. Item 117 is his Ballads in Imitation of the Antient, published in 1801 by the great imitator. This was his first post-scandal work, and unlike in most, Ireland used his actual name. £350 (US $555). Several more of Ireland's poetical efforts are also available in this catalogue for those who collect famous forgers or lousy poets.