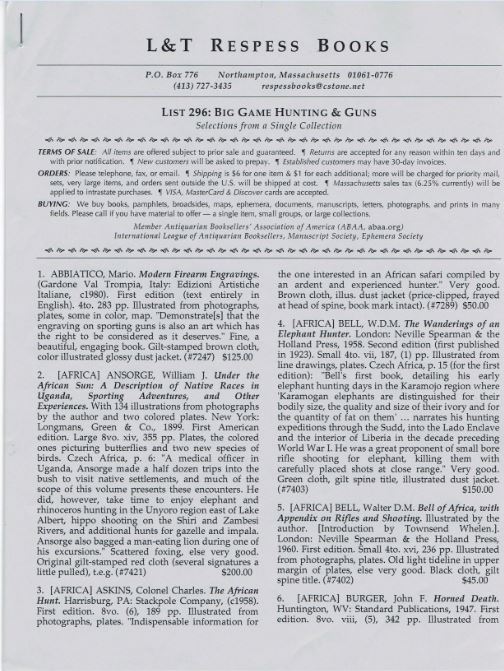 L & T Respess Books has released a catalogue of Big Game Hunting & Guns. Most of the books are focused on hunting big game, be that the big game of America, or the really big game of Africa. Hunts similar to what we saw in the past continue in North America, but the African safaris are of another time. Culling of herds of African game, with large species now under grave threat, is a bit chilling, but this was a different time. White hunters bagged hundreds of lions, elephants, and the like in the days when most of Africa was a European colonial empire. Such use of another's land might not be much appreciated today, but then again it was less devastating then Americans virtually wiping out the buffalo on which the country's natives depended for survival. Hindsight is always clearer. In the day, great hunters, wealthy foreigners, and even one of America's greatest presidents, Theodore Roosevelt, made the trek to Africa and other far off places for the chance to bag a few (or a lot) of very large animals.

The most famous of big game hunters, not necessarily for his hunting prowess but for his celebrity, was Theodore Roosevelt. That is not to say he wasn't adept at hunting too. Roosevelt loved challenges, and the bigger and more dangerous the better. It was a test of his mettle, or something. Item 23 is Roosevelt's African Game Trails: An Account of the Wanderings of an American Hunter-Naturalist. Indeed, it should be noted that Roosevelt was not only a hunter, but also a dedicated conservationist. Roosevelt's term as President ended on March 4, 1909, after, to his everlasting regret, he declined to seek reelection in 1908. Less than three weeks later, he was off on his African safari, an expedition sponsored by the Smithsonian institute. T.R. could not stand the thought of sitting around with nothing to do. The Smithsonian wanted specimens, and Roosevelt did not let them down. He brought back over 11,000, though this number includes plants, insects and the like. Still, what they bagged was “enormous even by the liberal standards of that era.” The book includes a listing of each big animal. $500.

Roosevelt's journey would be revisited half a century later by another Roosevelt. Item 20 is Sentimental Safari, by Kermit Roosevelt, Jr. Kermit was Theodore's grandson, their lives overlapping by three years. Kermit took his two sons along on this retracing of his grandfather's famous expedition. This copy of his 1963 book is signed by the author. $75.

We'll add one more Roosevelt, but this is an unexpected one. Elliott Roosevelt was not an offspring of Theodore, but rather, his brother. The brothers were close, and Elliott was the more charming, and seemingly headed for the greater success of the two brothers. However, the younger Elliott would become an alcoholic at an early age, which would lead to madness and a suicide attempt from which the injuries soon proved fatal. He was only 34. Item 136 is Hunting Big Game in the Eighties: The Letters of Elliott Roosevelt, Sportsman. This book was edited by Elliott's daughter, Anna Eleanor Roosevelt. She usually just left off the “Anna.” Eleanor was only 9 when Elliott died, but he had written her many letters about his trips during that time. Elliott's death left her an orphan as her mother had died two years earlier. These letters focus mainly on Elliott's big game hunting in Africa. The book was published in 1933, the year Eleanor became first lady when her husband, Franklin, took office as President. $75.

Almost all of these hunting books were written by men, but here is an exception: Caravans and Cannibals, by Mary Hastings Bradley, published in 1926. Mary Hastings was a writer who had already published a couple of books about Egypt when she got married. Herbert Bradley was a big game hunter, so the two took off on an expedition to the Belgian Congo in the early 1920's. They hunted elephant, buffalo, and lions. The book comes with a three-page letter concerning some monkey skins she obtained in Africa. Why did she want monkey skins? On second thought, I don't want to know why. Item 48. $125.

If hunting in Africa is too hot and steamy for your taste, you could try this one: Stalks in the Himalaya, Jottings of a Sportsman-Naturalist, by E. P. Stebbing, published in 1912. The game was far different here. There were no lions, elephants, hippos or rhinos. Instead, they hunted animals like the goral, serow, tahr, and markhor. Huh? Am I the only one who has never heard of these animals? It turns out they are all real, and generally of small populations living under conditions where few species dare to tread. All are described as “goat-like,” but this is not surprising as few animals can manage the high steep terrain like a mountain goat. Item 166. $125.