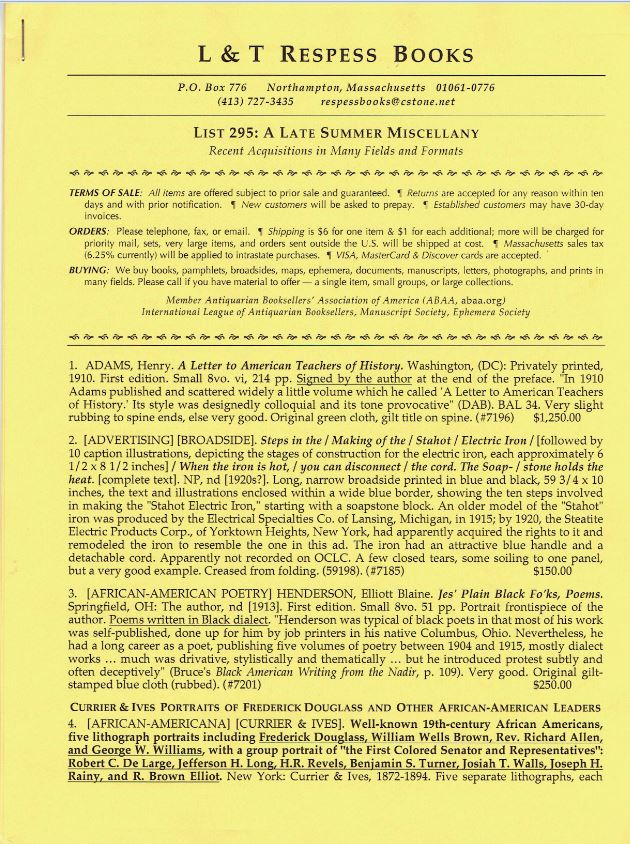 L & T Respess Books has published their List 295: A Late Summer Miscellany. Recent Acquisitions in Many Fields and Formats. This is certainly a miscellany. In other words, there is no particular thread I can discern here except that items are American or related to America. If that is your field, you are bound to find something you like. These are just a few samples.

We start with a truly amazing collection of letters for any collector of Americana. There are 14 in all, 13 written by Massachusetts Congressman Samuel Hooper to his wife from 1864-1865, and one from 1875. Hooper was a wealthy merchant who served in Congress from 1861 until his death in 1875. He was well-respected in his time and connected with the highest people in government. His letters provide much insight to goings on in Washington near the end of the Civil War. However, what makes them particularly notable is he recounts several meetings he had with President Lincoln, some in private. Hooper was close to Treasury Secretary Salmon Chase, but Chase was ambitious and attempted to manipulate Lincoln to his own advantage. While Hooper doesn't spell out the issue in his letter, he notes that Lincoln spoke freely to him about it, and he relayed the President's concerns to Chase. Chase in turn offered his resignation (he had done this before) and Lincoln, perhaps to Chase's surprise, accepted it. Despite his friendship with Chase, Hooper appears sympathetic to Lincoln's need to be rid of the man.

On New Year's Day, Hooper writes of another meeting with Lincoln, but the President was not in a mood to talk about serious matters. Instead, he relates a story about a “crazy” man who came to the President with a message from God. Lincoln stops him and asks to make an inquiry before the man proceeds - “why did God select you to bear his message instead of communicating it directly to me himself.” After the man reflected a moment, he responded, “I suppose for the same reason that he selected Daniel to bear his message to Nebuchanezar, why that was it was not for me to inquire.” Lincoln concedes “he had me there,” after which the President said it took an hour and half to get rid of him.

They meet again on January 31, 1865, and Hooper says this was “the first full and free conversation I ever had with him and I was very much impressed by his earnest and straight forward views and expressions as well as their sound good Sense.” They “gave me a much higher view of his character than I ever had before.” Lincoln lays out his plans for reconstructing the South after the war, and hopes Congress will not interfere. However, “...if congress does interfere it will make no difference in my course – I shall do it.” Item 49. Priced at $12,500.

Lincoln inherited a mess when he became President. The man who left that to him was his predecessor, James Buchanan. Buchanan long wanted to be President, and his dream was finally realized in 1856. Surely he must have known how daunting his challenges would be, but he thought he could compromise his way to a balance between North and South, with a bit more tilting toward the secession-minded South. It didn't work out that way, but the 65-year-old new President must have been a happy man when this invitation was issued to the Grand National Inauguration Ball, Washington City, Judiciary Square, March Fourth: James Buchanan Prest. U.S., Jno. C. Breckenridge, Vice Prest. U.S. It was sent to a Kate Claiborne, who as best we can tell was the granddaughter of the first Louisiana Governor and a prominent member of Washington social circles at the time. What started so pleasantly did not end well. Buchanan would go on to be regarded as one of America's worst presidents, while Breckenridge would be the only U.S. President or Vice-President to take up arms against his own country or be declared a traitor by the U.S. Senate. Item 15. $350.

This may not have been quite on the level of an inaugural ball, but if you were living in Iowa at the time, this was probably a special event. Item 46 is a large broadside promoting a concert by the Singing Birds. The Singing Birds were “two little girls,” Bella and Jennie Simpson, ages 9 and 11. They were promoted by J. Simpson, whom we will guess was their father. The notice tells us they possess, “Full and Rich Voices! Their Power of Execution Astonishes all who hear them...” They were to be accompanied by M. F. Pierce, presumably an adult male, whose “superior Bass singing is applauded wherever heard,” and another male adult. It was printed by a small-town press from Mt. Pleasant, Iowa, whose existence from 1856-1866 gives us a date range for the performance. Respess notes that despite their search, they have been unable to find anything else about the young songstresses. $1,500.

Mr. Simpson might have been in trouble for working his two young daughters if this constitutional amendment had been passed. Item 52 is a broadside caption titled The Cat Is Out of the Bag. Published by the Massachusetts Public Interests League circa 1924, it argues against the adoption of what would then have been the 20th Amendment, enabling the federal government to adopt child labor laws. The Supreme Court had struck down an attempt to do so, saying this was the exclusive province of the states. The League gives the usual arguments about how regulating child labor is supported by socialists and communists. They claim, “...when the government decides whether and how they may work, and where and how they be educated...they will have been nationalized as completely as the children of Soviet Russia.” Certainly, we would not want to see Bella and Jennie “nationalized,” so if Dad wanted to send them out to work in the coal mines, the girls could have dug happily knowing they were supporting freedom. Interestingly, this amendment was never adopted, failing to gather the necessary support of three-quarters of the states. Perhaps this broadside was part of the reason, since Massachusetts was one that rejected it. It is still on the docket as there is no time limit to passing it, but no state has voted to adopt the amendment since 1937. Nevertheless, Bella and Jennie could not work in the mines today as in 1941, the Supreme Court saw the error of its ways and reversed its earlier decision prohibiting the federal government from regulating child labor. $125.

Here is another broadside promotion for a performance by some small people, but they weren't 11 and 9 years old. It announces, Positively One Day Only! Park Hall, Bath, Monday May 11th, 1868...Four Beautiful and Symmetrically Formed Ladies and Gentlemen in Miniature, being the Smallest Human Beings of Mature Age Ever Known on the Face of the globe! There were four of them, highlighted by General Tom Thumb, his wife, Livinia, “whose beauty, grace and accomplishments captivate all hearts,” Commodore Nutt, and Minnie Warren, “of fairy proportions.” Together, all four of them weighed only “a trifle over 100 pounds.” Supposedly, they had just returned from Europe where they performed before “Kings, Queens, Emperors, and Nobility of the Old World!” The Singing Birds never achieved such an audience, but presumably they grew too large as they aged. Item 84. $650.