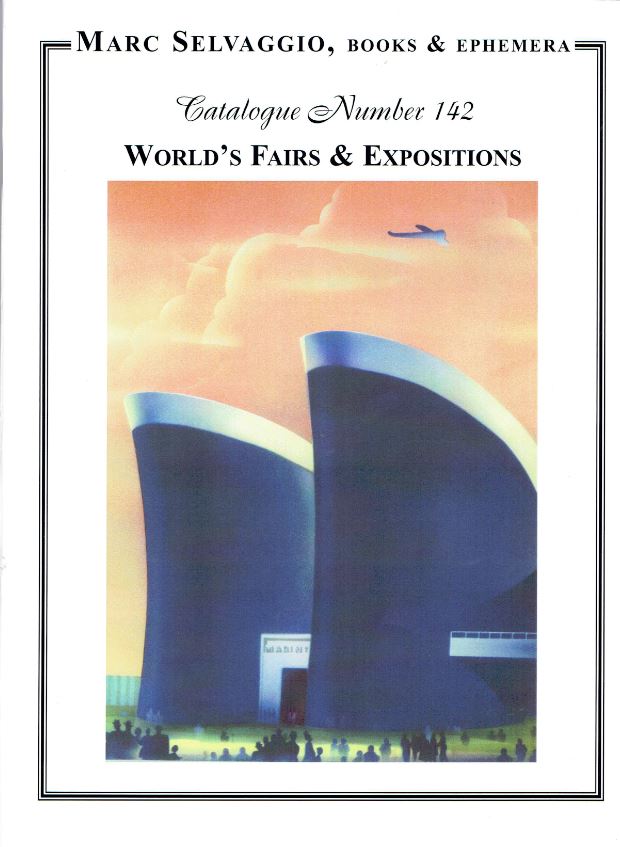 Off to the fair we go!

Marc Selvaggio, Books & Ephemera has issue a new collection of World's Fairs & Expositions. Since the first such fairs around the middle of the 19th century, these events have drawn worldwide crowds to celebrate special occasions. They started in Europe, but America has had more than its share now. Anniversaries of the signing of the Declaration of Independence, the Louisiana Purchase, Lewis and Clark's expedition, and Columbus' discovery of America have been among the events celebrated at American fairs. Participants have mainly been nations, states/provinces/communities within a nation, or businesses promoting their wares. Of course, rides and sideshows often accompanied the more serious displays. Marc Selvaggio has put together a selection of almost 600 items pertaining to various fairs from 1851-1970. Most would have been available at the fairs had you been able to attend. Now they are available in this catalogue. Here are a few examples.

We start with an item from the 1876 Philadelphia Centennial Exhibition, and it was provided by the printing firm of Rex and Bockius. They were displaying The Old Ephrata Printing Press. They described this as “the same press on which the Declaration of Independence was printed – and the same press which printed this broadside.” Well, yes, maybe, sort of. The press was used by one of the cloisters of German brethren in Ephrata, Pennsylvania. That community is located in Lancaster County, about 50 miles from Philadelphia. It seems unlikely that the printer of the first copies of the Declaration of Independence, John Dunlap, dashed all the way to Ephrata to print the Declaration instead of in his shop. Of course, the broadside does not say first printed, just printed, and lots of presses have printed copies of the Declaration of Independence over the years. However, it is not unlikely that early copies were printed on this press, perhaps the first German translation. Item 26. $75.

Item 8 is filled with irony the speaker must have missed. It is a Speech upon the Representation of the United States at the Exhibition of the World's Industry, Paris, 1867. Delivered in the House of Representatives, March 14,1866. The speaker was Congressman Nathaniel P. Banks, who appears to have been a generally good, if imperfect man. He was a leading abolitionist, and supported other good causes such as woman's suffrage and government reform. He was a governor of Massachusetts, was Speaker of the U. S. House of Representatives in the 1850's, was a Union general during the Civil War, and served various terms in the House of Representatives between 1853-1891. Selvaggio describes Banks' speech as “enthusiastic and long-winded,” perfect for a politician. Among his statements, Banks says, “The strength of our civilization is more in ideas than in force. The lesson the old world is to learn of us and which we ought better to comprehend ourselves is, that in the wise economy of nations, ideas are better than blows, and brains better than blood.” This came just a year after the end of the Civil War, where northerners and southerners met on fields across the nation, using their brains and ideas to amiably and rationally discuss their differences. Well, at least Banks did recognize that at times we ought to “better comprehend” our own lessons. $60.

Those who like Ferris Wheel rides would have loved Chicago's Columbian Exposition of 1893. It was there that George Washington Ferris constructed his gigantic wheel. It was almost 250 feet high, and contained 36 passenger cars, each able to hold 60 people. In other words, 2,160 people could ride this Ferris Wheel at one time. It was by far the largest, and dominating structure at the fair. Item 64 is a cabinet card of this marvel. The wheel would be set up in a different Chicago location after the exposition, then transported to St. Louis for the 1904 World's Fair. After that, it was demolished. $75.

Next up we have A Century After. A Souvenir of the Louisiana Purchase Exposition at St. Louis, Commemorating the marvelous growth of our country. This patriotic piece from 1904 was created by the Standard Sanitary Manufacturing Company. They were in the plumbing and bathroom design field. And what could go better together than America and bathroom fixtures, except, maybe, America and apple pie? Item 119. $60.

Or, we have this piece from the Philadelphia fair of 1926, that city now back to celebrate the nation's sesqui-centennial: Landmarks of Liberty. This was published by the La France Mfg. Co., a maker of laundry detergent. It includes a fair flyer and a bunch of postcards and other cards. Among those important freedoms of La France's landmarks of liberty is the all-important “women's freedom from wash-day drudgery.” That's what George Washington was fighting for! Item 235. $30.

From the 1936 Texas Centennial Exposition in Dallas in 1936 comes this gem: Visit the Incubator Baby Exhibit, published by the Women's Auxiliary of the Bradford Memorial Hospital. As Selvaggio notes, “I have always been baffled by the exhibition of premature babies at world's fairs!” I would have been too, except I had no idea they had such exhibitions. I've been to a couple of world's fairs, but somehow missed them. Do they display the preemies in the science hall, or on the midway? Item 443. $45.

This next one is really creepy: 1937 Exposition Internationale, Paris. Pavillion Allemand / German House / Deutsches Haus. It is a folder with die-cut window and 12 postcards with views of a modern German house. A mosaic window in one glorifies the Nazis. Three years later, the Germans would be back in Paris, but with a much larger number of people, and they were not friendly exhibit guides. Item 463. $75.