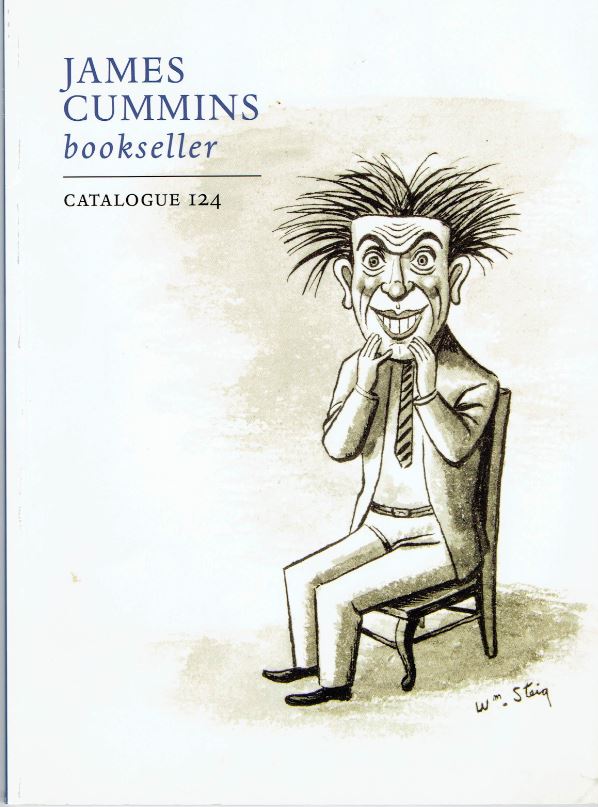 James Cummins Bookseller recently published their Catalogue 124. Cummins sells a variety of material, so it is hard to describe what can be found inside. Suffice it to say it is all significant, highly collectible material. Here are some samples.

We will start with a book that those who watched the recent Ken Burns PBS epic on the Roosevelts will appreciate. Theodore Roosevelt was an up and coming New York Assemblyman in 1884 when he was struck by a terrible tragedy. He was called from Albany to his home in New York City because of terrible illnesses. On the following day, both his wife and mother died at his home. Obviously, the event was devastating. Roosevelt, who would remarry two years later, could never again even speak of his wife. Instead, in typical TR fashion, he engrossed himself even deeper in work. He battled opposing forces at the Republican convention, and after the election, headed west to get away from it all. He became the obsessive cowboy/ranchman/hunter in the most desolate of places, Dakota's Badlands. A year later, he published this book about his adventures: Hunting Trips of a Ranchman. Sketches of Sport on the Northern Cattle Plains. It was his first, but not his last book on the adventures of an outdoorsman. This is #411 of 500 copies in this limited first edition. Item 51. Priced at $2,500.

Here is another man with Roosevelt's spirit of adventure, and utter disregard for his own safety. Mungo Park was an African explorer, venturing into the unknown interior at the turn of the 19th century. He made two trips, and here is his account of the first: Travels in the Interior Districts of Africa: Performed...in the Years 1795, 1796, and 1797... published in 1799. Park was imprisoned for several months and laid low by illness. The folks back home in England thought he was lost. It was a notable triumph when he reappeared. One question Park was unable to answer on this first journey was where was the terminus of the Niger River, whose headwaters he found. The Niger takes a long circuitous route, so it was not at all obvious which river exiting the African coast matched up with the headwaters he found. Park returned in 1806, but the second trip proved far worse than the first. Disease and hostile natives wiped out the party, Park himself being one of the last three survivors who was finally killed by the locals. Item 44. $3,000.

Item 16 is an 1850 letter from Henry Clay, long time Kentucky senator and one of the most powerful Americans never to reach the presidency (he tried three times). The letter is to former Delaware Senator Richard H. Bayard and his wife. Clay, known to history as the “Great Compromiser” for his work at bringing different sides together, had just heard of the death of Bayard's son, Charles. Charles Bayard was 21 years old, serving in the navy when he was struck by debris from an eruption of Mount Vesuvius. What were the odds of that? Clay writes in sympathy, “I can fully appreciate your feelings and your distress, alas.” Indeed he could. Seven of Clay's 11 children died while he was alive, including all 6 of his daughters. $2,500.

Item 5 is a biblical first: The Holy Bible, Translated from the Latin Vulgate, published in Philadelphia in 1790. It was the first Catholic Bible printed in the United States. The publisher was Irish immigrant Mathew Carey, who worked in the trade for Benjamin Franklin for a year, and was friendly with several of America's early leaders. It had not been believed at the time that there was enough demand for a Catholic Bible in America to justify the printing. Nonetheless, Carey was able to secure 475 subscribers (it is believed the print run was about 500). $35,000.

Carey's publishing business is long gone, but this next item harks back to the beginning of a much larger publishing empire. Item 64 is The Cross Word Puzzle Book. An Anthology of Fifty Cross Word Puzzles Selected as the Best of the Thousands That Have Been Submitted to the New York World. It was published in 1924. The story is that Richard Simon's aunt was a crossword puzzle devotee who asked him one day if there was a book devoted to her favorite past time. Simon could find none, whereupon the light went on. He teamed up with friend Max Schuster and they formed the publishing house Simon and Schuster. It is still one of the world's largest today, though it has changed hands many times. This copy commemorates the firm's beginning with this inscription: “To Aunt Wixie whose idea, announced on January 3, has finally taken material form in this first copy of the first edition of the first publication of Simon and Schuster Inc. Alias The Plaza Publishing Co.” It is signed “Dick” and “Max.” $10,000.