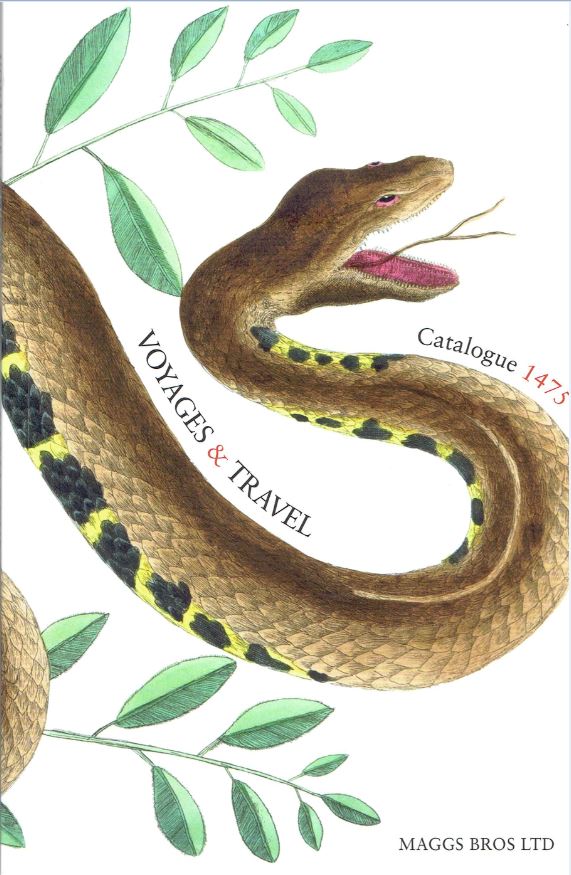 Catesby's snake on the cover of Maggs Bros.' Catalogue 1475.

Maggs Bros. Ltd. has issued a catalogue of Voyages & Travel, the 1475th in their long history. It takes us back to a time when journeys were a major, often extremely dangerous undertaking. That snake on the cover (taken from Mark Catesby's 18th century natural history of the American South) was likely the least of your worries. Times have changed, but our appreciation for the books that described these treacherous journeys of bygone days remains. Here are a few for you to consider.

The most famous of all sea mutinies was that of the Bounty. A group of crewmen, who apparently preferred to remain in Tahiti then carry on with the ship's mission, overtook Capt. Bligh and the loyal crew members, sending most of them off on a small boat from which Bligh led a miraculous 3,500-mile trip to rescue. The mutineers returned to Tahiti, and eventually the largest group sailed off to Pitcairn Island, unknown to the rest of the world. When word of the mutiny reached England, a mission was sent to find the mutineers and bring them back to London for trial. The ship Pandora, captained by Edward Edwards, was assigned the task. Edward's journey didn't turn out much better than Bligh's. He did find the 14 men still on Tahiti, although a few of them were not mutineers but loyal sailors who remained with the Bounty because they could not fit on Bligh's small boat. However, despite their searching many Pacific islands, Edwards did not find those on Pitcairn. Meanwhile, the Pandora suffered a series of mishaps, the worst being when it struck a reef and sank. Altogether, over 50 of the Pandora's crew, along with four of the prisoners, died before they returned to England. Edwards himself would be court-martialed, though exonerated. Four of the prisoners were also exonerated, two pardoned, one acquitted on technical grounds, and three executed. The account of the Pandora's terrible mission was published in 1793, A Voyage Round the World in His Majesty's Frigate Pandora, by George Hamilton. Item 49. Priced at £9,500 (British pounds, or roughly $15,484 in U. S. dollars).

Pirates make for great tales, even if actually meeting up with them must have been a terrible experience. Item 83 is A Narrative of the Horrid Murder & Piracy committed on board the Schooner Eliza, of Philadelphia... by its captain, William Wheland. This is a story of piratical ineptitude, amusing but for the lives lost. The Eliza was two weeks out of Philadelphia when three pirates, posing as crewmen, took over the ship. They did so by killing the sailors, all except the Captain. They were forced to reach a deal with Captain Wheland to be their pilot, as none of the pirates knew how to steer a ship. What kind of pirates were they? The plan was to kill Wheland once they saw land, but the Captain was smarter than the greedy pirates. He snuck up on two of them while they were examining the booty, locking them in the hold. He then captured their leader on deck, lashing him to the mast. Wheland took the ship to St. Kitts, where the pirates were arrested and sent back to Philadelphia. They were tried, sentenced, and hanged for their crimes. This book contains last letters written back home by the pirates, expressing remorse for their acts. £2,500 (US $4,080).

Item 82 records a celebration in San Francisco that had nothing to do with that city: The Celebration in San Francisco, in Commemoration of the Successful Laying of the Atlantic Cable Monday 27 September 1858. The transatlantic cable took as short a route as possible, running from Ireland to Newfoundland, about as far from San Francisco as anyplace on the North American continent could be. Nonetheless, the good people of San Francisco took to the streets to celebrate this technological marvel, which was described in this rare broadside. A greeting was sent from the English side followed by a message from Britain's great 19th century monarch, Queen Victoria, to America's not-so-great President, James Buchanan. Unfortunately, messages had to be entered very slowly, making substantial communication difficult, and within a few weeks, there was deterioration in the cable and it ceased to work altogether. It would be almost another decade before a new, better constructed cable could be laid to make cross-ocean communication practical. £1,250 (US $2,040).