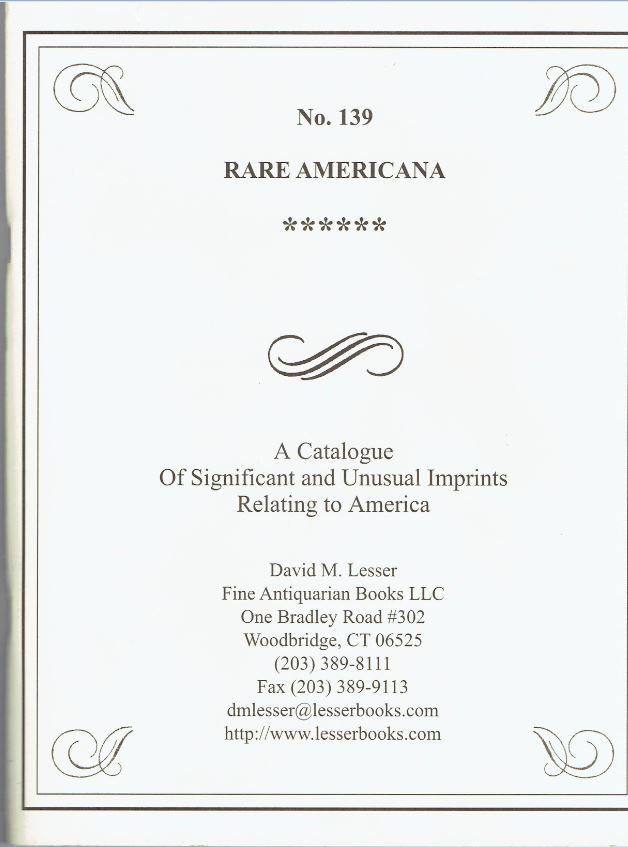 David M. Lesser Fine Antiquarian Books has issued their No. 139 of Rare Americana – A Catalogue of Significant and Unusual Imprints Relating to America. It includes books, pamphlets, broadsides, newspapers, and images pertaining to America's history. Most are from the 18th or 19th century, although there are a few outside of those borders, including several items relating to the 1954 Brown vs. Board of Education Supreme Court case that desegregated the nation's schools. Here are a few of the items to be found in this latest selection.

They weren't doing polls back in the 1860's, but if they were, President Andrew Johnson probably would have had the lowest approval rating of any president ever. His strong Union support led to his being selected by the Republicans as Abraham Lincoln's running mate, but the border state vice-president who was elevated to President after Lincoln's assassination was far more sympathetic to the South than were most northerners. Item 13 is something of an amateur psychological profile of Johnson by George Boutwell, The Usurpation. From the 'Atlantic Monthly,' October, 1866. This reprint is an attack on Johnson's policies by a strong supporter of the rights of blacks in America. Boutwell says that Johnson was not anti-slavery on principle, but rather, was a “Southern States-Rights man.” However, he was intent on preserving the Union. It was the slaveholders, not slavery, that Johnson hated, claimed Boutwell. They were the “patricians,” while Johnson saw himself as a “plebeian,” or poor white. Once the Civil War broke down the power of the “patricians,” Boutwell concluded, that in Johnson's eyes, everything necessary had been accomplished, so there was no need to be concerned with the condition of the freed slaves. Priced at $350.

Next we have an item from a sensational trial in Richmond, Virginia, in 1886. One Lillian Madison, an apparently unwed (but perhaps secretly married to the defendant) pregnant young lady was found floating in a reservoir. The initial judgment was suicide, but authorities later concluded there were signs of violence on her body. Thomas Cluverius was charged with murder. There was only circumstantial evidence, the main piece being Cluverius' watch key, found near the reservoir. The city was divided between those who believed him guilty and innocent, but guilt was the judgment of the only people who mattered – the jury. Attempts were made to get Cluverius to confess, but he proclaimed his innocence all the way to the end. Item 26 is a book he wrote – Cluverius. My Life, Trial and Conviction, published in 1887. Many hoped his book would be a confession, but Cluverius again proclaimed his innocence, while recounting his life, trial, and relationship with Miss Madison. Thomas Cluverius never got to collect royalties from his book. He died too young, and not from natural causes. $250.

This next item also pertains to a legal matter, though not one of life and death. Rather, this dealt with the issue church and state, disputes that are as lively today as they were in 1904. Item 5 is a manuscript legal brief, In the Supreme Court, State of Kansas. J. B. Billard...vs. the Board of Education of the City of Topeka... Interestingly, it would be another man's suit, Oliver Brown, against the Topeka Board of Education half a century later, that would desegregate schools. In this case, Mr. Billard was trying to release his son from participating in the Lord's Prayer in public school, which ran contrary to his religious beliefs. He wanted his son to be allowed to study, while the school insisted that if he didn't want to recite the prayer, he sit silently at his desk and refrain from studying. While saying the Lord's Prayer might appear to be a religious event, the Kansas court came to an unusual conclusion. It decided that this was not so much a religious observance as a secular exercise – it kept the children quiet and put them in an orderly frame of mind. Therefore, the Court upheld young Billard's suspension for the misconduct of studying in school. On a positive note, it may be that fewer students misbehave by studying in school these days. $450.

Here is another one of those thorny legal debates. To borrow a phrase, “you decide.” Item 76 is Hatcheson v. Tilden, Maryland General Court, April Term, 1799. Hatcheson had been elected Sheriff, but the election judges disqualified him for not meeting the requirement he own “real and personal property in the state” valued at over 1,000 pounds. Hatcheson said he did, the judges said he did not, and it all depends on how you interpret the wording. He owned personal property valued at over 1,000 pounds, but no real property. So, did the statute mean he could have just one form of property, so long as it was worth over 1,000 pounds, or did he at least have to own a little of each type of property, with an aggregate value over 1,000 pounds? The Maryland court said he had to own some of each and disqualified Hatchison, not being moved by his alternate arguments, that his holding title to real estate as trustee, or his ownership of a church pew, constituted owning real property. $450.