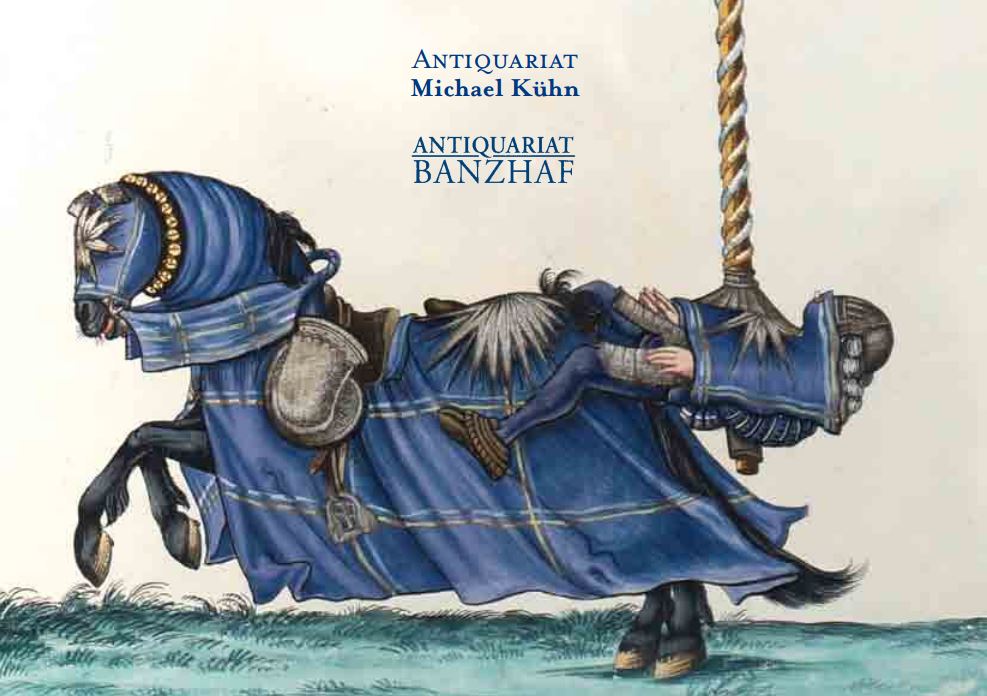 Antiquariat Banzhaf and Antiquariat Michael Kuhn have combined to produce another joint catalogue. This one does not appear to have a title, and I cannot come up with an obvious one for it. Material does not fit into any clear subject, though we do note that interesting illustrations are features of most items. This includes early photography, drawings by talented though not always professional illustrators, abundant plates, and even some nature printing. While both booksellers come from Germany, the material is international in scope, Europe and America leading the way. These are a few samples of what it is being offered.

We start with a three-volume bound set of photographs compiled by Pierre Arbel with the cover title Exposition de Chicago, 1893. This was the famed Columbian Exposition, celebrating 500 years since Columbus' discovery of the New World. Much had changed in those 500 years, but the rate of change was about to explode. The Chicago fair would introduce new technology to many of its visitors, such as the electric light. Arbel was a French industrialist and member of the exposition committee. The photographic albums are filled with images of buildings and other features of the fair along with products displayed. However, it is particularly concentrated with photographs concerning the greatest development of the quickly expiring 19th century – railways. Railroads were at their peak in 1893, with little suspicion that their dominant role in transportation would be replaced by horseless carriages in the coming decades. The albums contain numerous photographs of locomotives, wagons, and other railway equipment. Priced at €3,500 (euros, or about $4,620 in U.S. dollars).

The Chicago World's Fair came 15 years after a like fair in Paris. A similar photo album was prepared for this fair by Alphonse Liebert, a French photographer who began as a portraitist in San Francisco during the early days of photography, returning home in the 1860's. In France, he photographed sites around Paris, including the Paris commune. Among the photographs in this album is one that displayed a very large head. It was that of Lady Liberty. The French and Americans had agreed on the project to build a statue commemorating the cooperation between the nations during the American Revolution a century earlier. It would take many years to complete, with the statue being dedicated in 1886. At the time of the 1878 fair, the head had been completed and was placed on display. Liebert's album has the cover title Souvenir de Exposition de 1878. €8,000 (US $10,562).

Next we have a handwritten French translation circa 1800 of John Churchman's solution to the problem of determining longitude, the Magnetic Atlas (Atlas Magnétique in French). The French translation was never published, though many editions of Churchman's theory were published in English. Churchman was a surveyor from America whose ideas were not well-received in his homeland. He traveled to Europe where he found a more sympathetic audience. While John Harrison had developed a chronometer by this time that enabled mariners to determine longitude, it was quite expensive. Churchman believed that determining magnetic variations from true north, combined with easy to obtain latitude readings, could establish a ship's longitude. However, Churchman did not accurately understand the source of the earth's magnetism, his assumptions thereby not leading to correct conclusions about longitude. It was a nice try. €9,800 (US $12,937).

German immigrant George Johann Scharf published a collection of Six views in the Zoological Gardens, Regents Park, in 1835. Scharf was a watercolor artist who learned lithography in his homeland. He moved on to France and the Low Countries, joined up with the English army in time to participate in the Battle of Waterloo, and in 1816 moved to London, where he settled down. He specialized in scenes of ordinary life in England, converting his drawings to salable prints. He then took up providing illustrations for scientific institutions. This brought him in contact with Charles Darwin, who commissioned him to draw some South American fossils. However, the relationship soured as Darwin felt Scharf was overcharging for his work, which led to a drying up of these orders and a less than prosperous conclusion to Scharf's career. He died in 1860, leaving behind over a thousand drawings which made their way to the British Museum. This particular work is somewhat scientific in its depiction of animals, though it is more focused on scenes at the Zoological Gardens. €4,200 (US $5,544).

Nature printing would have a brief run of popularity in the 1850's, with Henry Bradbury being the most notable Englishman to employ the process. However, he was not the first of his countrymen to use the process where a specimen itself is used to create the image printed. Thomas Hopkirk initiated the process in England in 1817 with the publication of Flora Anomoia. It is a study of anomalies in the plant kingdom. Most copies of this work are in the octavo trade edition with only one nature printing among its plates. This is a copy of the large paper edition which had 13 nature printed plates, plus it is an exceedingly rare copy with two extra such plates. It was inscribed by Hopkirk to Lady Liston. She was the wife of diplomat Sir Robert Liston and had a deep interest in gardening and botany. €8,000 (US $10,557).