A Look Back from Gene W. Baade Books on the West 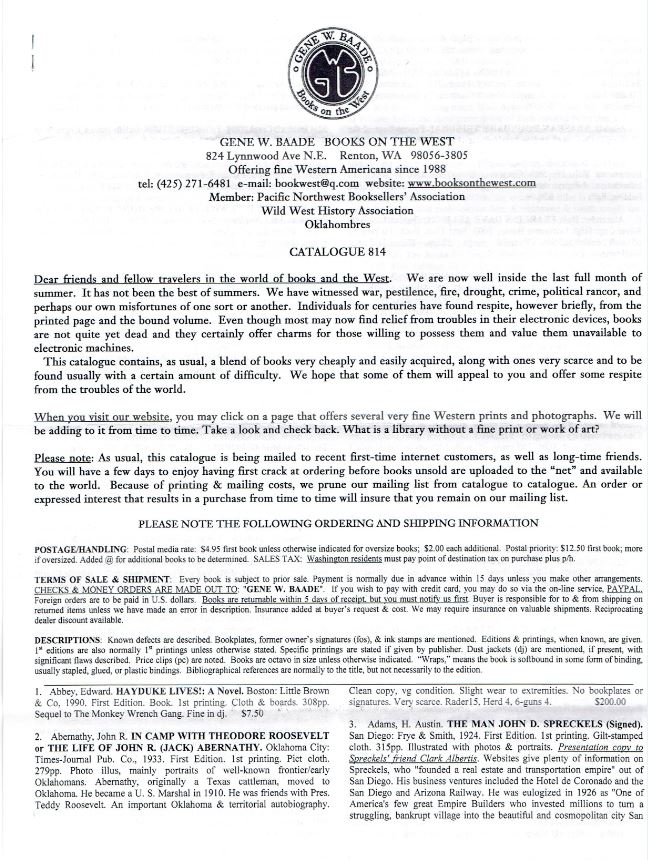 The latest selection of Books on the West.

Gene W. Baade Books on the West opens their latest selection, Catalogue 814, with a notable reason to want to add to your book collection. In times of trouble, they note, books have offered respite from the troubles of the day. This has been a particularly rough summer on the international stage. The news has brought stories of terrible tragedies, more so than usual this year. These cannot be ignored, and solutions must be found, but once is awhile, we do need a break. And, sometimes when we look to the past, we may find some overlooked answers to our current problems. So here are a few samples of what Baade has to offer, which should provide some respite, learning, entertainment, and maybe a few answers.

We start with a thorough look at America's first overland mail route to the west coast, The Butterfield Overland Mail 1857-1869. Its organization and operation over the Southern Route to 1861; subsequently over the Central Route to 1866; and under Wells Fargo and Company in 1869. It is one of the classic Arthur Clark western publications, three volumes by historians Roscoe and Margaret Conkling, published in 1947. Prior to Butterfield, it could take months for a letter to reach the west coast, as it had to travel by boat to Panama, across the isthmus by land, and then by boat to California. John Butterfield proposed a route across the southern United States that included numerous transfer stations in the Southwest that would take letters, and a few hardy passengers, from St. Louis or Memphis to San Francisco in just over three weeks. It was not the shortest route proposed, but Butterfield won the contract as the southern route enabled mail to be reliably shipped even during the winter. As the title implies, the original Butterfield service concluded in 1861, a number of issues leading to its demise. First the Pony Express, with its more northern route, cut the time to 10 days. Then, the outbreak of the Civil War disrupted the ability to ship along the southern route. Finally, Morse ran his telegraph coast to coast, allowing for instantaneous relay of important messages. Butterfield went bankrupt and was taken over by Wells Fargo, which continued service in other forms until completely driven from business with the completion of the transcontinental railroad in 1869. The Conklings reportedly spent some 20 years, 65,000 miles worth of travel, took thousands of photographs and interviewed those with first-hand knowledge still living, in compiling this impressive set. Item 35. Priced at $500.

Butterfield's horses and riders only did limited portions of the route, passing off to the next rider. Here is the story of a horse and rider who traveled coast to coast, and in a somewhat circuitous route so as to touch every state (then 48) in the union. The rider and writer was Frank M. Heath, a World War I veteran from Maryland who set off in 1925 from Washington, D.C., and returned in 1927. While humans were likely impressed by Heath's performance, Heath gave all of the credit to his horse, as shown in his 1941 book's title, Forty Million Hoofbeats. Factual Story of the 11,356 Mile Trip of Gypsy Queen Under Saddle. Indeed, part of Heath's motivation was to prove what a horse could accomplish, and after Gypsy Queen's remarkable journey, Heath afforded her a well-deserved happy retirement. The pair set out on a southern route and returned on a northern one, with numerous jogs to make sure they touched every state. A major diversion was required, essentially circling the state of Missouri, and touching on its neighbors, to reach those heartland states not easily accessed by their southern or northern route. Other states were just nipped by their out-of-their-way jogs, such as California, Florida, and Maine. Heath had some advantages over the Butterfield riders – no Indians, bandits, or Confederates with which to contend – but they did have to share the road with those danged automobiles, now starting to become available to the masses. Heath passed away in 1945, Gypsy Queen predeceased him (1936), and while Heath provided a well-attended and celebrated burial for Gypsy, she was obviously not available to offer him the same. This copy was signed by Heath in the year of publication. Item 69. $75.

Item 147 is the Sixtieth Annual Report of the Commissioner of Indian Affairs to the Secretary of the Interior 1891. These reports, issued during the 19th and 20th centuries, recount the government's dealings with the Indian tribes. Much covers the attempts at pacification, sometimes through force, other times by attempting to “civilize” the natives by such actions as removing their children to schools that would teach them the white man's ways. The timing of this set is particularly notable. It was at the end of the previous year that the Wounded Knee Massacre occurred, generally thought of as the final battle of the long-running Indian wars. The set contains two volumes. $200.

Wounded Knee was the last battle of the Indian wars, but this next book culminates with the Indians' last major winning battle of those wars. That event need not be identified, it is so well known, though the ironic title confirms it – Custer's Luck. Edgar Stewart's 1955 book is regarded as one of the best on the subject. It is not just about Custer's unlucky battle, but covers U.S. government relations with the Indians that led to Custer's dramatic end. Custer's career may have had many lucky breaks, but Stewart sees his defeat as the result not of bad luck, but of poor decisions. Custer spread his troops too thin, and was unable to amount any kind of effective defense when superior forces attacked. Item 137. $25.

Item 16 is Amelia Barr's Remember the Alamo. Who could forget? This is a piece of historical fiction, the story of an Anglo doctor and his Mexican wife in the days of the Texas Revolution. Naturally, this arrangement brings the critical issues of the time, particularly national loyalty, into play. While a novel, Mrs. Barr carefully researched the subject, introducing the various real players in the Texas Revolution in historically accurate roles. Though she wrote some 80 novels in her life, Mrs. Barr was particularly well suited for this story. That might seem unlikely since she and her husband were born in England, but they emigrated to America around 1850, and quickly moved west, settling briefly in Galveston and then moving to the state capital in Austin. Her husband became an auditor for the state, and was said to be friendly with Sam Houston. However, Mrs. Barr was not a writer at the time. Unfortunately, a yellow fever epidemic in 1867 took the lives of her husband and four sons. She moved back east and became a tutor. From there, she tried her hand at writing, and proved to be very successful in this new endeavor. Her story about early Texas was published in 1888, this being a first edition. $15.