The West Coast of Australia from Hordern House 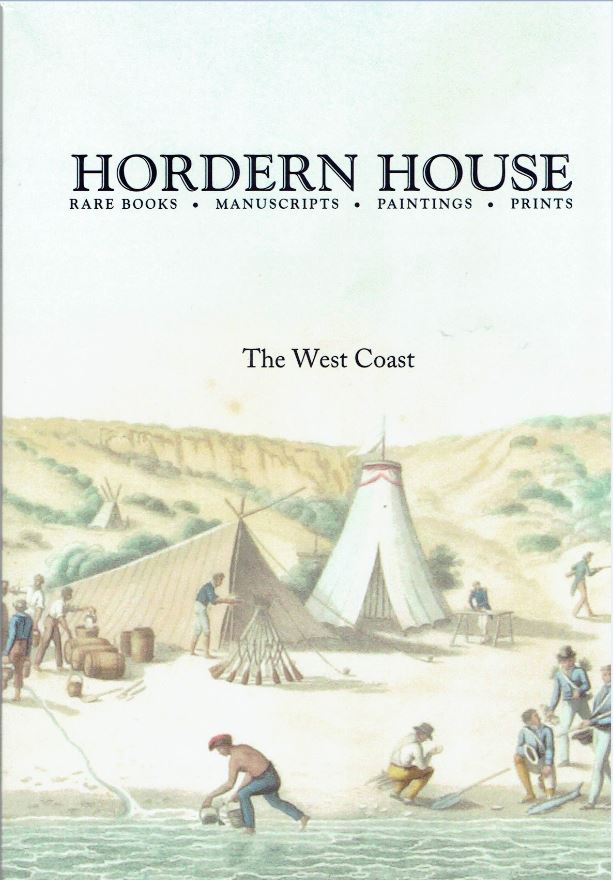 The West Coast of Australia.

Hordern House has issued a most impressive catalogue entitled The West Coast. A caution to American readers – this catalogue has nothing to do with California, nothing to do with the Pacific Ocean. Hordern House comes from Australia, and these works pertain to the Australian west coast. For reference, the sea off of the west coast is the Indian Ocean. The Pacific bounds the sixth continent's east coast.

Australia is most heavily developed in the east. The British, first to colonize the land, chose the east and southeast coast. The weather is more temperate. However, the earliest discoveries of Australia were on its west coast. Most European travelers came from the east, so it's not surprising this was the first part of the continent they would come upon. In those days, they still thought what they had found was an edge of a massive southern continent they wrongly believed dominated the southern hemisphere. The first discoveries would come in the early 17th century, but the final pieces to the puzzle would not be put together until the beginning of the 19th. Recently, this less inhabited coast of Australia was seen regularly in world news as the launching point for investigations into the whereabouts of the missing Malaysian jetliner. Here are a few of the important western Australia works from earlier times offered by Hordern House.

We start with a book that is not primarily about Australia, but it is of major importance to the continent as it contains the first printed map to show a part of it. The book is Iournael vande Nassausche Vloot... an account of a journey of 11 ships under the command of Dutch Admiral Jacques l'Hermite, published in 1626. L'Hermite's mission was to disrupt Spanish shipping in South America before proceeding west to the Dutch stronghold in the East Indies. However, the publisher selected a map of a portion of the western Australia coast reached in 1616 by Dirk Hartog to put on the title page. Hartog was the second European to spot the Australian coast, following Willem Jansz in 1605, who thought he had found a portion of southern New Guinea. This map shows a spit of land protruding from an otherwise undefined land, labeled “'t Land Eendracht,” named for Hartog's vessel. The Dutch would use that name for another 150 years. Item 1. Priced at AU $135,000 (Australian dollars, or roughly U.S. $127,324).

This next book is described by Hordern House as “the most desirable of all books relating to western Australia.” It contains the first European images of Australia. It is also a dramatic, and horrible tale. The title is Ongeluckige Voyagie, Van't Schip Batavia... by Francois Pelsaert, a first edition published in 1647. Palsaert captained the Batavia on behalf of the VOC (Dutch East Indian Company) on a trip to that city (today Jakarta) in 1629. He became separated from the other ships, eventually striking a reef off the western coast of Australia. Short on food and water, Pelsaert took a small group of men in a small boat to the Australian coastline to seek supplies. There was not much to be found, so Pelsaert and his men then headed for Batavia, a month away, to seek rescue. They succeeded, and with help in tow, returned to the islands where those who were shipwrecked sought refuge. What they found was horrific. Jeronimus Cornelisz, second in command, and his accomplices, who had already planned to mutiny, had committed a series of terrible atrocities. They had been slaughtering the others to preserve supplies for themselves, as well as exercise complete control over the survivors. Up to 125 people, including women and children, were killed, often brutally. For them, the killing had become fun. A few soldiers, sent to another island to find water, where Cornelisz assumed they would die, actually found water. Warned by a few escapees from the reign of terror, they held off the mutineers, and when Pelsaert and his rescuers arrived, warned them that the mutineers planned to catch them by surprise, kill them off too, and steal their ship. Instead, the mutineers were captured, six, including Cornelisz, immediately hanged (Cornelisz had his hands chopped off first), two were left on the Australian coast, and six more later executed after trial in Batavia. It is from all of this horror that we ended up with a book containing the first European drawings of Australia. Item 3. AU $625,000 (US $590,641).