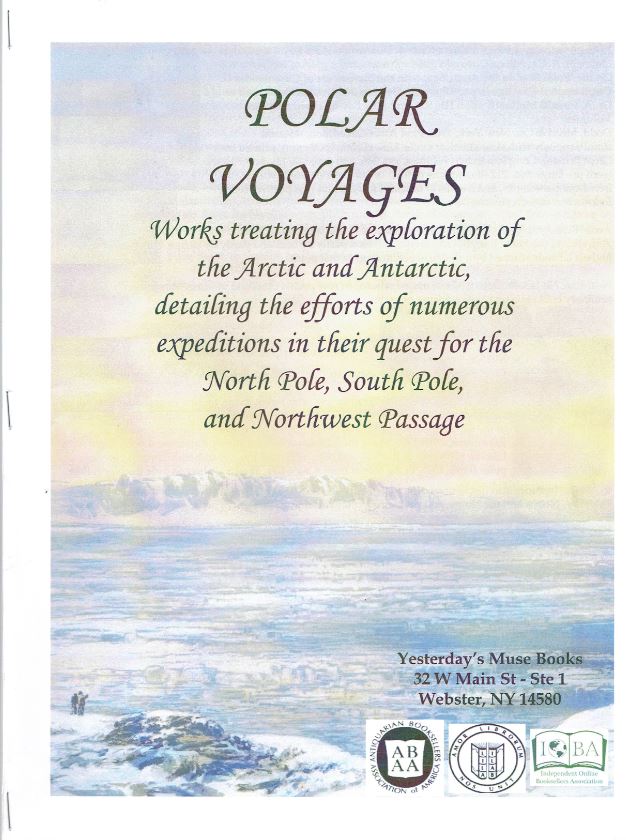 Yesterday's Muse Books is taking us very far north (or south) with their latest catalogue: Polar Voyages, works treating the exploration of the Arctic and Antarctic, detailing the efforts of numerous expeditions in their quest for the North Pole, South Pole, and Northwest Passage. Arctic exploration has fascinated us for centuries. It's not just a question of what is to be found. We already know the answer for the most part – ice. What is so riveting about these accounts is the incredible challenges in reaching their goals. Extreme cold and terrible storms, plus dangerous, ice-laden seas made these the most difficult of explorations. It is almost unimaginable how many people took on such extreme hardships, all in the cause of knowledge. Here are a few of these chilly books.

There were two major goals in the history of polar exploration. One was to find a northwest passage, a shorter route from Europe to Asia by sailing north of Canada. After centuries of unsuccessful attempts and much loss of life, the route was finally discovered. Unfortunately, it is too shallow and frozen over too much of the year to be of much practical use. The other goal was to reach the poles, more of a quest to be achieved because they “are there” than of serious practical benefit. Each was achieved around the turn of the 20th century. Item 18 is the first claimed reaching of a pole, in this case the northern one. The claim was long ago discredited. Item 18 is Frederick Cook's My Attainment of the Pole: Being the Record of the Expedition that First Reached the Boreal Center, 1907-1909. With the Final Summary of the Polar Controversy. Cook was on a hunting expedition when he, two Eskimos, and 26 dogs, supposedly made a successful run to the North Pole. However, most, if kind, think Cook misread his instruments. Many others think he just made it up, and there were other incidents in Cook's history that made him somewhat questionable. However, it should be noted that Cook had his brave side, and he never lost the admiration of Roald Amundsen, the first both to reach the South Pole and find the Northwest Passage, the result of an earlier voyage together. Offered is a third printing from 1913, signed and inscribed by Cook. Priced at $85.

The man most often given credit as the first to reach the North Pole is Robert Peary. For a long time, his claim was almost universally accepted, but in more recent years, doubt has been raised as to the accuracy of Peary's beliefs, if not his honesty. Peary's success, if it was, was achieved during his third attempt in 1909. Item 69 is his account of his second attempt, which may have been the farthest north ever reached at the time (or, maybe not): Nearest the Pole: A Narrative of the Polar Expedition of the Peary Arctic Club in the S. S. Roosevelt, 1905-1906, published in 1907. He did manage to reach beyond a latitude of 87 degrees. As with his famed third and final journey, Peary and the Roosevelt made their way to northern Ellesmere Island, in the far north of Canada near Greenland, before setting out on sledges for the pole. $75.

If neither Cook nor Peary reached the North Pole, then this would be the first success, as it is well documented. Nonetheless, this is sort of cheating too. It was a fly over. Planes weren't flying as far as the poles in 1909, but by 1926, that was possible, though a bit harrowing. If this was the first, then it completed an amazing trifecta for one of the participants. That would be Roald Amundsen, who was the first to reach the South Pole, and the first to find the Northwest Passage. Item 3 is First Crossing of the Polar Sea, by Amundsen and his partner, Lincoln Ellsworth, published in 1927. Item 3. $65.

Of all the journeys in attempt to find a northwest passage, that of Sir John Franklin is best known. It is remembered for the same reason that Custer's last Indian battle is so well known. It ended in disaster. When no trace was found of Franklin within a reasonable time, missions were sent out to find him. Many were sent, and many were unsuccessful. American philanthropist Henry Grinnell financed two of them. Item 42 is The U. S. Grinnell Expedition in Search of Sir John Franklin, by the mission's surgeon, Elisha Kent Kane. The first Grinnell Expedition ran from 1850-1851, with the account published in 1854. It did not find Franklin, though many artifacts were located, and they, along with other searchers, found three graves of Franklin's men on Beechy Island, not quite so far north as Ellesmere. However, this encampment was from before Franklin ran into trouble, while they wintered over, and the three graves were of men who died from lead poisoning, not climate or starvation. $150.

Kent not only wrote the account of the Second Grinnell Expedition, he also led it. Item 43 is Arctic Explorations: The Second Grinnell Expedition in Search of Sir John Franklin, 1853, '54, '55. Like the first, it brought back scientific information, but not Franklin. It would not be until the end of the decade that the mystery would be unraveled. They searched around Baffin Bay, eventually becoming trapped in the ice. After two winters, they concluded the ship would never be free, and proceeded on a dangerous journey over the frozen sea. Fortunately, Kane and his men had the sense to establish good relationships with the native Inuit, which Franklin failed to do, providing the help they needed to survive. $150.

Here is another voyage that did not end well. In 1879, George Washington DeLong, a U. S. naval officer, led an expedition that hoped to reach the North Pole. They started in California, hoping to pass through the Bering Strait between Alaska and Russia, and on north until they reached the pole. Evidently, they must have hoped for seas to be more open than they are. North of Siberia, their ship became entrapped in ice. For 19 months they remained in the ice until the pressure became so great it crushed the boat. They retreated to open water with three small boats and headed for Siberia. The three became separated. One boat was lost, never to be found. Another made it to the coast and was later rescued. The third, with DeLong, made it to the coast but could not find rescue. Only two men sent to find help survived. The others, DeLong included, perished from cold and starvation. Item 21 is The Voyage of the Jeannette. The Ship and Ice Journals of George W. DeLong...Commander of the Polar Expedition of 1879-1881. It includes notes DeLong made as well as accounts by survivors. Published in 1884, the book was edited by DeLong's widow, Emma. $375.