World Travel and Voyages from the William Reese Company 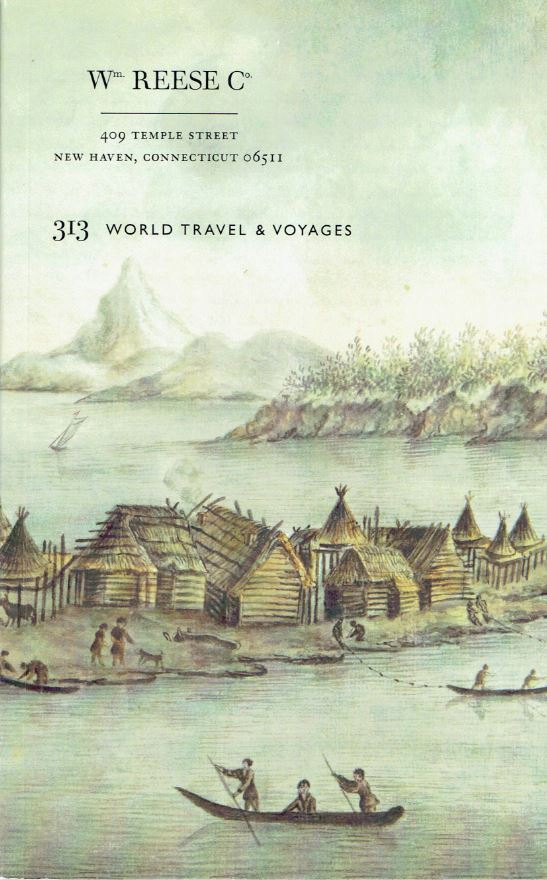 The William Reese Company has published their 313th catalogue, World Travel & Voyages. They range from 16th century expeditions by some of the earliest explorers, to Nixon's visit to China in 1972. Along with the more famous travels we have many 19th century accounts, often manuscript diaries and books kept by sailors out to see the world. Those were no cruise ships they sailed, conditions being unpleasant to tragic. It is easier to be an armchair sailor looking back centuries in time. Here are some travel books and manuscripts offered by the William Reese Company.

We start with one of the great voyages, the second circumnavigation, after that of Magellan. It was commanded by the English captain, later vice-admiral and knight, Francis Drake. His exploits made him a hero in his native land, but his acts of piracy made him an outlaw to the Spanish. Drake headed east to steal from Spanish shipping with six ships in 1577. By the time he rounded the Strait of Magellan, he had only one left. It was enough. He intercepted a couple of Spanish ships laden with riches along the west coast of South America. He proceeded north, looking for more, but instead found what we now call “California.” He named it “New Albion,” or New Britain. Drake's claiming it for England would be a source of that nation's claim on the American west coast as late as the 19th century. Drake stopped to rest in a bay. No one knows for sure where that was. The most widely held belief today is that it is a bay about 30 miles north of San Francisco. Drake then proceeded west, completing the circumnavigation and returning home in 1580. Queen Elizabeth did not want the Spanish to know exactly where Drake had been, nor to appear supportive of his piracy. The result was details of Drake's journey were kept private. An account was finally published in 1628, and item 51 is a copy of the first edition of The World Encompassed by Sir Francis Drake... Drake was long gone by then, but the account was compiled mainly from notes by Francis Fletcher, who was the chaplain on the journey. This copy includes the portrait of Drake and the very rare map. $225,000.

Many ancient voyages were unpleasant, but few can match this one for horror. It became the inspiration for Herman Melville's Moby Dick. Item 24 is a Narrative of the Most Extraordinary and Distressing Shipwreck of the Whale-Ship Essex... by Owen Chase, published in 1821. He was one of the few survivors. In a turn about, perhaps fair play, the Essex was struck by an angry whale, rather than the other way around. It sank, the 21 survivors cramming onto three small boats. The nearest islands were 1,200 miles to the West, but the crew feared they were inhabited by cannibals. They went east instead. They were temporarily saved when they discovered uninhabited Henderson Island. They did not realize Pitcairn Island, home to the Bounty mutineers, was only 100 miles away. Food and water soon became scarce on Henderson, so 18 of the 21 survivors took to the boats again. They set out on a journey of thousands of miles on small boats meant only for short distances, little food or water with them. The three boats separated, one lost forever, while on the other two, the men began dying. The survivors were forced to eat their dead, and in one case, drew lots to determine who would be sacrificed when no one died quickly enough. Eventually, eight were rescued, all near death, including the three who stayed on Henderson Island. $13,500.

Here is an account from a man who did get to ride on a modern ocean liner instead of a primitive sailing ship, yet still suffered a harrowing, life-threatening experience. Allan Beattie was a passenger on the Lusitania when it went down in 1915. The Lusitania was nearing England during the middle of the First World War when she was struck by torpedoes from a German U-boat. Within a matter of minutes, she sank to the bottom. This violation of civilian shipping would be one of the reasons for the U.S. entering the war on the side of England and against Germany in 1917. Once Beattie got to land, he wrote this 12-page letter. When the first torpedo hit, he wrote, “I got an awful smash in the back from the water and was thrown about thirty feet on my face.” He found his mother, rushed below to get his life jacket, and found her again. She said she did not believe there was much danger, to which Beattie replied that it looked as bad as it could get. He strapped the jacket to his mother and kissed her. He never saw her again. Just as he finished adjusting the straps, the boat went down. “I was sent sliding the whole width of the deck.” He was thrown into the ocean, luckily rescued quickly by a lifeboat. “Mother is gone, and altho we have not heard of her I don't think that she can be alive.” Almost 1,200 people died, with about 760 surviving. Item 97. $15,000.

Next we have another account from a seaman, a man who signed on with the U.S. Navy from 1843-1845. Item 11 is his manuscript, with the title Private Journal of W. M. Beers. He boarded the Macedonian in Philadelphia on a mission to Liberia, the Cape Verde Islands, and the west coast of Africa. Its job was to attack pirates and interdict the slave trade. Beers was shocked by some of the behavior on board. In Philadelphia, people observed the Sabbath, but on board the ship, the sailors were forced to perform tasks that could well have waited for another day. In a letter he sent to a friend (Beers has transcribed the letters he sent in his journal), Beers writes, “I cannot describe to you the feelings that I experienced the first day,” before proceeding to describe them. “I was shocked...to hear such blasphemy and curses which accompanied almost every sentence and I feel these things much more keenly as I had but just emerged from the society of those who had [thought] for the welfare of their eternal souls...” These sailors behaved like... sailors. $900.

Item 34 is the rather bland sounding A Discourse Upon Some Late Improvements of the Means for Preserving the Health of Mariners. It was delivered to the Royal Society in 1776 by a man not well-remembered, John Pringle. The speech was of enormous importance to travel and exploration. Pringle was reading a report created by Captain James Cook, who couldn't read it himself as he was off on his third voyage. In it, Cook explains the steps needed to prevent scurvy, the scourge of early sea travel that was more threatening to missions than storms or pirates. Cook discovered that pickled cabbage and malt juice, along with cleanliness, were the solution to this terrible problem. This item is bound with five other Discourses from Pringle between 1774 and 1778. $48,500.