Travel and Exploration from the George S. MacManus Company 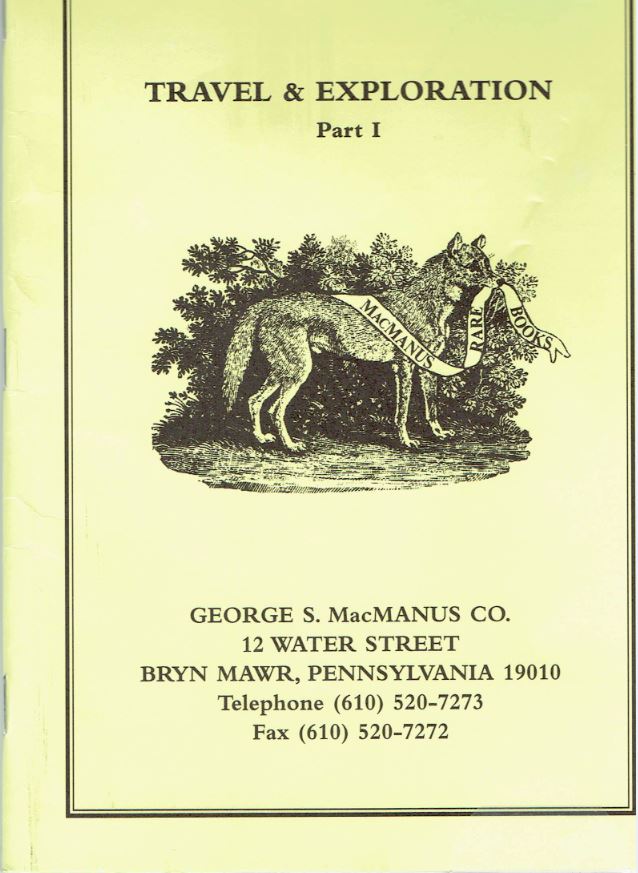 Travel and Exploration Part I.

The George S. MacManus Company has released Catalogue 412 Travel & Exploration Part I. This one takes us to the letter “I” in the alphabet, so we guess there will be two more parts to come. Most of these are travels within the North American continent, though some are sea voyages, and some go to other parts of the world – China, India, and other areas of Asia, Australia, Central and South America, various islands of the Pacific and Caribbean. These journeys mostly range from the 17th-19th century. What is surprising is how many accounts there are of internal American explorations, or just trips by curious visitors willing to take on inland travel at a time when this was difficult if not dangerous. I will admit that many of these travels are ones with which I was not familiar, making this catalogue a trove of books for those who collect accounts of such journeys. There is much, often little known, to be found. Of course, other explorations described are among the most famous of all, such as Cook and Lewis and Clark. Here are a few samples.

We start with a book that will not be at all unfamiliar to those who collect American travels. Item 78 is a first edition of Jonathan Carver's Travels through the Interior Parts of North America, published in 1778. Carver traveled farther west than any English explorer prior to the American Revolution. He visited the Great Lakes region, the headwaters of the Mississippi, and went as far west as today's Dakotas. His text was the first to mention “Oregon.” While not quite reaching his goal of the Pacific, he did bring back tales of a great mountain range about which he learned from the Indians. That would be the then unknown Rocky Mountains. Item 78. $5,000.

Here is a look at the American Southwest during the earliest days it was the American Southwest. Item 27 is Personal narrative of explorations and incidents in Texas, New Mexico, California, Sonora, and Chihuahua, connected with the United States and Mexican boundary commission, during the years 1850, '51, '52, and '53. It was prepared by John R. Bartlett and published in 1854. America had just seized its southwestern territory, but the border was left unclear at the end of the Mexican War, requiring surveyors from both countries to plat the precise (or semi-precise) line. The Americans started in California, and moved with reasonable speed, but as they crossed into today's Arizona, determining the border became more difficult. Hence, the task took so many years to complete. Ironically, shortly after the work was completed, most of it became pointless. With the Gadsden Purchase, the difficult part of the work, the Arizona and New Mexico borders, were shifted south, the purpose being to build a Pacific Railroad in a location favorable to southern interests. $3,000.

There is probably nothing, other than maybe the Fountain of Youth, that has been so sought after as the Northwest Passage. In the days before the Panama Canal, there was no shorter way to travel from Europe to China and East Asia then to go all the way around the southern tip of South America. However, if there were a way to sail on the north side of Canada, the distance would be immeasurably shorter. And so, they searched. And they searched. Item 143 is Voyage to Hudson's Bay, by the "Dobbs Gallery" and "California", In the Years 1746 and 1747, For Discovering a North West Passage, by Henry Ellis, published in 1748. The first part of the book recounts 23 other English voyages in pursuit of the elusive passage. It then describes the mission on which Ellis served as hydrographer and surveyor. Like those before, and many after, the mission did not succeed in finding a route. However, it did provide one useful piece to the puzzle. This journey established that there was no route through Hudson's Bay. This meant that a hoped for easier route did not exist, and future missions would need to start farther north in their pursuit. It would not be for another century and half that the passage would finally be located, but even then, it was too shallow, and free of ice for too short a period of time, to be of much practical use. $2,250.

Next up we have Travels in the Interior of America, in the Years 1809, 1810, and 1811, published in 1817. John Bradbury was a Scottish naturalist sent to study botanical life by the Botanical Society of Liverpool. Starting from St. Louis, he visited territories along the upper Mississippi River, as well as the states of Ohio, Indiana, Kentucky and Tennessee. He then proceeded farther west to the Mandan villages. In 1811, he headed down the Mississippi toward New Orleans, leaving New Madrid, Missouri, the day before the tremendous earthquake. He provides an account of that terrible event, along with much else besides botanical data about the United States in his book. Item 53. $8,500.

Here is another European traveler who picked a momentous time to visit America. March-Gabriel Hurt-Binet came to America in October of 1860, just before the election which placed Lincoln in the presidency. All Hell broke loose after that, as the southern states seceded over the next few months, and by spring, the nation was at war with itself. His nine months allowed him to witness this troubled time. Hurt-Binet's book is entitled Neuf Mois aux Etats-Unis d'Amerique. He describes the places he visited, which were in Union territory, and comments on Shakers and Quakers, Emerson and Agassiz. Item 222. $275.

This one is definitely not an American journey. Item 71 is Terra Australis Cognita: Or, Voyages to the Terra Australis, published 1766-1768. James Callender provides a collection of early voyages to Australia, from before the land was settled, or even visited by Cook. Callender saw Australia as a fertile place for settlement, predicted that Britain would be the country to colonize the land because of her naval power, and proposed locating a penal colony there. He was either influential or prescient. $16,500.