Binding, Printing, Selling, and the Book Arts, from Forest Books 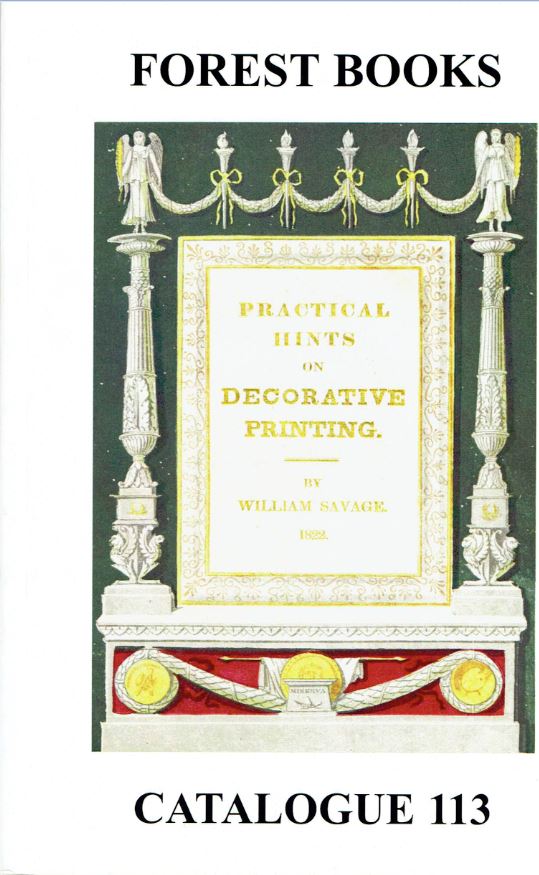 Forest Books recently released their Catalogue 113. A selection of books pertaining to the book arts, particularly relating to bookbinding, printing & bookselling history. A subheading adds, Including books from the working library of Roger Powell (1896-1990) bookbinder. Powell was at one time a partner in the firm of Cockerell & Son before setting out on his own. His reputation was that of one of the finest bookbinders of the 20th century. Here are a few items from the book arts from Forest's latest catalogue.

Item 21 is a catalogue of a sale with a strange tale behind it: The Valuable Library of Books, in Fonthill Abbey. It includes 20,000 books, and many other items, from Fonthill. The auction was set to run through much of September and October of 1823. Fonthill Abbey was a Gothic castle built by William Beckford during the first two decades of the 19th century. Beckford, who served for a time in Parliament, had inherited a small fortune from his father. He expended it on his mansion, filling it with books, art, furniture, and whatever else he wanted. He even built a tower to view the countryside. Unfortunately, he spent all of his money, and construction of the castle was shoddy. In 1822, he was forced to sell it all, the buyer being John Farquhar. Farquhar paid Beckford £300,000. Farquhar had little interest in books. It was just an investment. So, in 1823, it was Farquhar who put the books and other items up for sale in this massive auction. Priced at £795 (British pounds, or approximately $1,362 in U.S. dollars).

Let this next item serve as a warning for those who wish to publish or sell treasonous books (or, at least, treasonous in the eyes of authority). Item 324 is An Exact Narrative of the Tryal and Condemnation of John Twyn, for Printing and Dispersing a Treasonable Book. It also includes sections on the trials of bookseller Thomas Brewster and others for selling, printing, or binding seditious and scandalous pamphlets. In Twyn's case, he was brought to trial in 1664 for publishing the book A Treatise of the Execution of Justice. In it, Twyn asserted the right to revolt against an oppressive government. This was a right later claimed and exercised by the American patriots, and perhaps Twyn's case shows what would have befallen them had they not succeeded. Twyn was convicted, hanged, drawn and quartered, beheaded, and had his head put on display as a warning to others. £1,495 (US $2,561).

Item 262 is a first: Bibliotheca Americana; or, A Chronological Catalogue of the Most Curious and Interesting Books, Pamphlets, State Papers, &c. Upon the Subject of North and South America. Published in 1789, it is the first bibliography of works about America. It was written anonymously, attributed to various people associated with the British Library, but now believed to be the work of Leman Thomas Rede. Along with the bibliography there is an essay on the state of literature and bookselling in America. This is not the easiest bibliography to follow, and does have some errors. Joseph Sabin, the later American bibliographer, pointed out its shortcomings in his bibliography of the same name a century later. Nonetheless, it was a first, and contains 1,600 early listings pertaining to America. £795 (US $1,362).

If you would like to know what Members of Parliament once read, at least the common (not the lordly) ones, item 183 is a Catalogue of Books in the Library at the House of Commons. It was published in 1830. This is an important account of what was in the old library, formed in 1818. In 1834, the library was destroyed in a fire, much of the collection being lost. £125 (US $214).

Thomas Frognall Dibdin was one of the greatest book collectors ever. This is not because he had the greatest collection. He was not a wealthy man. It was a case of his love for books exceeding that of just about anyone else. Dibdin wrote Bibliomania and many other classic books about his love for collecting, but this isn't one of them. Before he wrote all of his books about books, he wrote this one – Poems – self-published in 1797. In hindsight, Dibdin was not impressed with his first separately published work. “I struck off 500 copies, and was glad to get rid of half of them as waste paper; the remaining half have been partly destroyed by my own hands... My one consolation is that the volume is now exceedingly rare.” It must be even rarer today. This is why Dibdin is remembered as a book collector, rather than a poet. Item 99. £575 (US $985).

Item 9 is a Directory of Antiquarian Booksellers in the British Isles. It was published by the ABA (Antiquarian Booksellers' Association) in 1932 (third edition). It includes descriptions of booksellers, with the facing page left blank for notes. A previous owner has added some comments. A few are quite biting - “Mostly new bindings (his own) of rather second rate quality,” “Untrustworthy,” “Large but rather dirty stock (sometimes imperfect) little real knowledge of books,” “Fakes, stolen property,” “We consider them the most reasonable and trustworthy of London dealers.” Either his standards were very high, or their standards quite low. £45 (US $77).