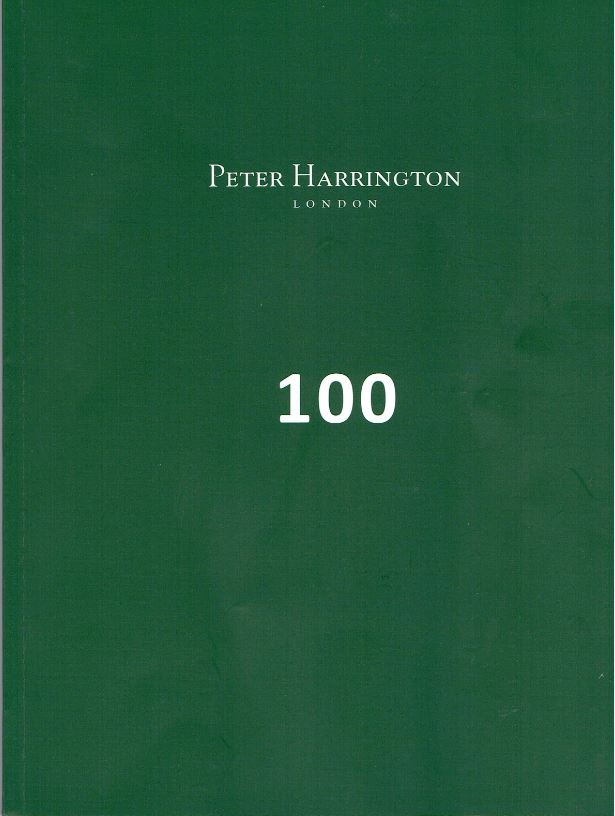 Peter Harrington of London has reached a milestone publication: Catalogue 100. You might expect there to be 100 books in it, but the subtitle is Fifty Books & Manuscripts. The firm uses this opportunity to briefly recount their history – formed in 1969 by the late Peter Harrington, operated for many years with his brother, Adrian Harrington, and today continued by Peter's son, Pom Harrington. He is not alone as there are now over 25 people on the firm's staff. Recently, the bookseller expanded to open a second shop in London, in Mayfair. The material offered in this 100th catalogue is truly spectacular. These are few examples.

Charles Darwin shook up the world when he published his book on the origin of species, a theory still resisted by many to this day. Even the scientific community was reluctant at the time, not wishing what Darwin had concluded to be true to be the truth. Darwin's On the Origin of Species is generally thought of as the theory's introduction, but it was not. The basics were presented earlier in a journal article by Darwin and Alfred Russel Wallace. Darwin had reached his conclusions many years earlier, but was reluctant to share them, fearful of the inevitable controversy. However, as he waited, Wallace independently reached similar conclusions, and was less fearful of publishing his theory. Darwin understood he could wait no longer, and so in 1859, he and Wallace together published this article, On the Tendency of Species to Form Varieties, and on the Perpetuation of Varieties and Species by Means of Natural Selection... in the Journal of the Proceedings of the Linnean Society (Vol. III). Offered is a copy of that journal, the signed personal copy of Adam Sedgwick, a mentor of Darwin and one of the most important figures in modern geology (but who nonetheless was one of those traditionalists who could not bring himself to accept Darwin's theory). Item 9. Priced at £55,000 (British pounds or about $94,214 in U.S. dollars).

This next item will appeal in particular to Americans. It is a copy of the Political Debates between Hon. Abraham Lincoln and Hon. Stephen A. Douglas, in the Celebrated Campaign of 1858, in Illinois... published in 1860. This copy is inscribed by Lincoln to his friend and supporter, Job Fletcher. Fletcher had served with Lincoln years earlier in the Illinois state legislature. It was during the 1858 Illinois senate campaign that Lincoln made a name for himself back home with his electrifying performance in those debates against his powerful, senate incumbent opponent, a leader noted for his “popular sovereignty” doctrine. It was meant to be a compromise on the raging slavery issue – leaving the choice to each state. It satisfied neither side. Nonetheless, the powerful Douglas prevailed in the 1858 campaign. When the two faced off again in 1860, this time for the presidency, Lincoln had this account of the 1858 debates published, as he was still relatively obscure, particularly compared to Douglas, and he hoped to revive some of the magic those debates provided for his reputation. This time, with Douglas' Democratic Party hopelessly split north and south, Lincoln prevailed. Item 28. £150,000 (US $256,923).

We turn now to another notable leader with a similar enormous impact on history, but this one came from England, and he is not remembered with quite the love and admiration as Lincoln. It is a document signed by England's King Henry VIII in 1513. Henry's reputation was very different at this time from the one he would have later in life. He was still a Catholic, still married to his first wife, and hadn't executed an inordinate number of people yet. Indeed, this document was a sign of great respect for Queen Katherine, from whom Henry's later divorce would tear apart the entire ecclesiastical structure of England. In 1513, Henry departed for France to wage war, something in which the British and French engaged for a millennium or so. While he was gone, Scottish King James IV attempted to take advantage of his absence by attacking England. Katherine became head of the army in Henry's absence, and the Queen's troops soundly defeated the Scottish invaders. James lay dead on the battlefield. Item 20 is a warrant signed by Henry ordering a substantial amount of cloth be purchased and given to Katherine's servant, John Hasilby. Clothing was a major sign of prestige at the time, and Henry wanted to reward his Queen for her victory with a symbol of great prestige. Sadly, the story between Henry and Katherine would not end with them living happily ever after. £30,000 (US $51,395).