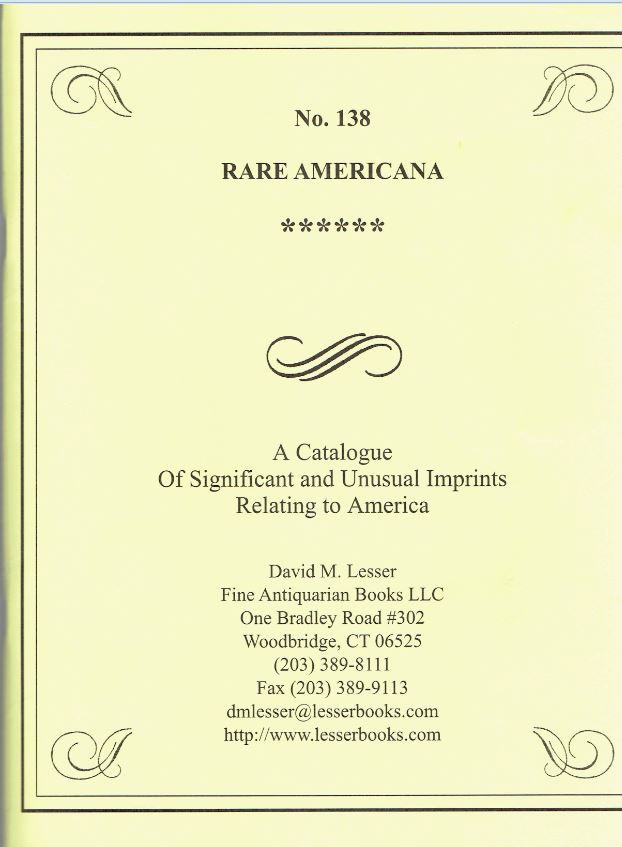 David M. Lesser Fine Antiquarian Books has issued catalogue No. 138 Rare Americana. This is their latest selection of historic Americana, mainly shorter form material such as pamphlets and broadsides, and most (but not all) from the 18th and 19th centuries. Here are a few selections from this latest collection of Americana.

The Union was quite liberal in welcoming back Confederate soldiers, both during and after the Civil War, other than those who held high positions in the Confederacy. It did have one requirement – that the returning sons swear an oath of loyalty to the Union. Item 24 is a collection of three such loyalty oaths. Each is a partially printed, partly manuscript document. That of Edward Cousinard of East Baton Rouge was signed on January 30, 1864. By that time, Union forces had taken control of Louisiana. The oath enabled Cousinard to become Sheriff of East Baton Rouge a few months later. The oath of Arthur McMurtry of Galveston was signed a little after the war ended, in July 1865, while that of Thomas K. Davis was signed in 1867. Davis' was sent from Washington and cites the pardon proclamation issued by President Andrew Johnson. Item 24. Priced at $3,250.

Some Confederates may have given up on the cause as it became more and more hopeless, but others hung on to the bitter end. Item 67 is a folded sheet headed Appeal to the People of Virginia, dated February 22, 1865. That was roughly six week's before Lee's surrender. A citizens' committee consisting of Moses Hoge and others notes that enemy movements in Georgia and South Carolina (Sherman's March) “have interrupted our communications with the Southern States, and seriously embarrassed the operations of the Subsistence Department.” In other words, soldiers in Virginia were in need of food. While acknowledging that “the resources of the citizens have already been severely taxed,” “through impressments, loans, and voluntary contributions,” they ask the people for more. “[W]ithout a continuation of these efforts, our soldiers cannot accomplish the task yet before them.” Item 67. $850.

Parson Mason Weems is best known to us for his biography of George Washington. It was meant to teach children the virtues of America's great leader, both real and imagined. It was Weems who came up with the famous “cherry tree” story, that no one else, including Washington himself, had heard of before. However, Parson Weems was a parson, after all, so it is not surprising that we would find some theological material from him as well. In the true spirit of his Washington morality play, this sammelband of six Weems' pamphlets is filled with moral stories. Among the titles we find The Bad Wife's Looking Glass or God's Revenge Against Cruelty to Husbands; God's Revenge Against Murder; or the Drown'd Wife; God's revenge Against Duelling; God's Revenge Against Gambling, Exemplified in the Miserable Lives and Untimely Deaths of a Number of Both Sexes; The Drunkard's Looking Glass; and God's Revenge Against Adultery, Awfully Exemplified in...the Accomplished Dr. Theodore Wilson, (Delaware,) who for Seducing Mrs. Nancy Wiley, had his Brains Blown Out by her Husband... It appears that Parson Weems believed in a vengeful God. These are various editions printed between 1818 and 1823, in a contemporary binding. Item 156. $2,500.