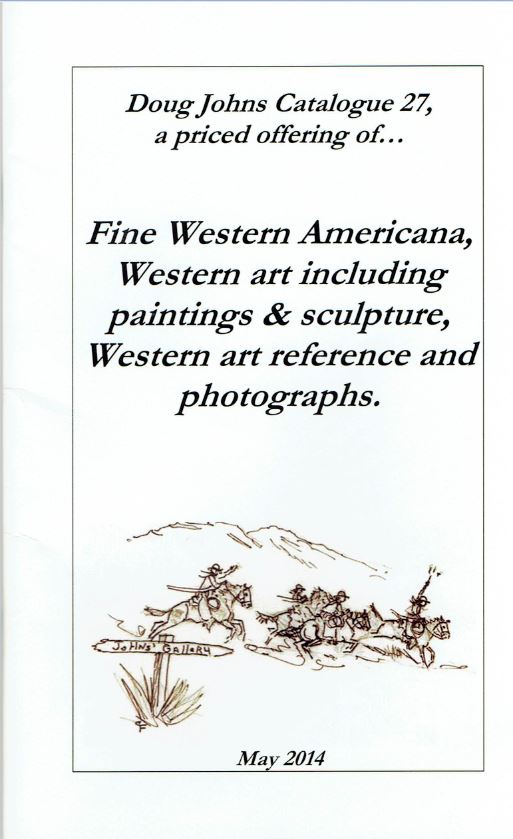 Johns' Western Gallery has issued their first catalogue in quite a while. It's been almost seven years since the last one, and that was sent from their location in San Francisco. They have since moved to Albuquerque, maybe not as far west geographically, but certainly at least as much western spiritually. San Francisco has changed more since the days of the Old West than has Albuquerque. While the location has changed, the material they offer has not. This renewed offering is titled Doug Johns Catalogue 27, a priced offering of... Fine Western Americana, Western art including paintings & sculpture, Western art reference and photographs. We will focus on the printed and written material in keeping with the nature of this website, though other art forms, as noted by the title, are to be found. While it has been almost seven years since their last catalogue, Johns informs us they plan to start issuing them now on a quarterly basis. Here are a few items to be found in the first one from this recent restart.

George Catlin was one of a very small number of Americans or Europeans who traveled into the American West to capture images and stories about America's natives in the days before their culture had been totally disrupted by invaders to their land. They came in the 1830's, that last moment when adaptation of culture had only just begun. Catlin is best known for his portfolio of hand-colored Indian drawings published in 1844 (an extremely expensive item today). However, he published a larger collection of images with text in 1841, two volumes entitled Letters and Notes on the Manners, Customs, and Conditions of the North American Indians. Written during eight years' travels amongst the wildest tribes of Indians in North America. It is one of the best sources of information on the Plains Indians in the days before they were overrun. Item 13. Priced at $2,000.

Next is a remarkable and unique item from the man known as the “cowboy artist,” C. M. (Charlie) Russell. Russell painted around 2,000 scenes of the Old West, cowboys, Indians, and scenery, in the decades surrounding the turn of the 20th century. He also wrote about his time and place. Item 69 is a letter he sent in 1910 to “Friend Bob,” Robert J. Benn of Kalispell, Montana. Benn was a successful businessman, being in the liquor distribution business, railways, and owning a saloon. He tragically died five years later in a quintessentially wild west manner – shot to death in a hold up in his saloon, apparently never solved. Written on Christmas Day, Russell pens his friend, “Friend Bob I got the buffalo all right and wish you and Mrs Benn a Merry Christmas and a happy New Year.” Benn had sent Russell some buffalo meat. Russell has drawn a color picture of himself holding a miniature buffalo on the letter (see image on the next page of this review). Russell on occasion would illustrate letters he wrote to friends. The aforementioned Mrs. Benn would fare better than her slain husband, remarrying and living until 1958. Item 69. Price on request.

The late Mr. Benn was not the only person making his fortune in turn-of-the-century Montana. Most people were making their money off of mining, if not directly, then by serving the community, as did Mr. Benn. Item 43 is A Brief History of Butte, Montana, the World's Greatest Mining Camp, by Harry C. Freeman, published in 1900. Butte was one of the greatest, and longest lasting of mining boom towns. It started, as did most, with gold and silver, but what was notable about the area was the large amount of copper. With growing demand for newly needed copper transmission wires, the town continued to grow for another 20 years after this book was published. Mining continues to this day, but only at a small fraction of Butte's heyday. $200.