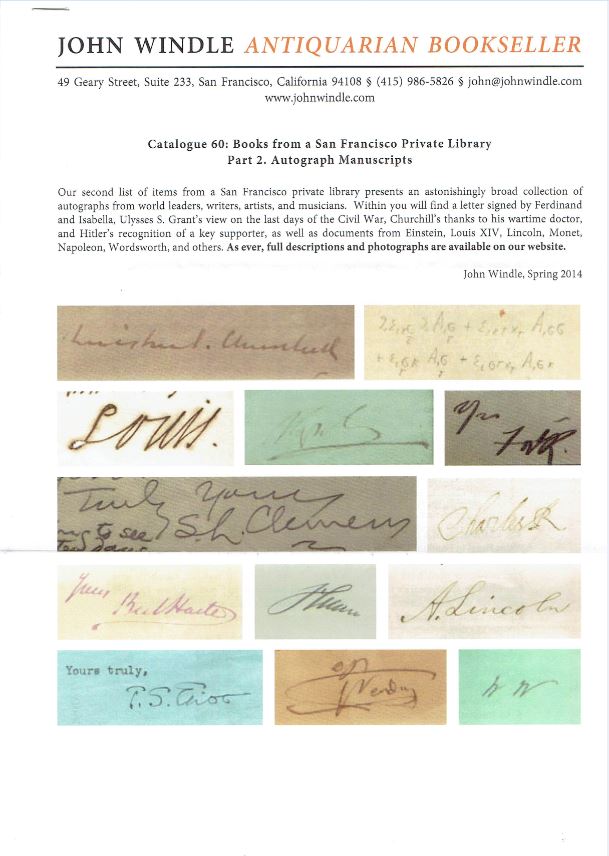 John Windle Antiquarian Bookseller has released Catalogue 60: Books from a San Francisco Private Library Part 2. Autograph Manuscripts. Last month we reviewed the first part of this collection, focused on books and manuscripts. It included some of the most important and collectible material in the field, and this selection offers no less. Names such as Lincoln, Napoleon, Einstein, Churchill, Franklin Roosevelt, Elizabeth I, Ferdinand and Isabella are to be found among these autograph documents. Here are a few more.

We start with a major Civil War letter from General Ulysses S. Grant. It effectively announces the war is almost over. It was written on April 4, 1865, to Colonel Bowers and Edwin Stanton. Bowers was an aide who Grant would call on to write up a copy of the terms of surrender five days later; Stanton was Secretary of War. Grant states, “The army is pushing forward in three columns in the hope of overtaking or dispersing the remainder of Lee's army.” He notes where his various troops are now closing in on Lee. “All of the enemy that retain anything like organization have now gone North of Appomattox and are apparently headed for Lynchburg. Their losses have been heavy. Houses throughout the country are nearly all used as hospitals for wounded men...” He then ends with a the rather dismissive comment about how serious the remaining threat is by writing, “I shall continue the pursuit as long as there appears to be any use in it.” Three days later, Grant would propose that Lee surrender, but the latter would stall for time, hoping, as Grant surmised, to be able to escape west to Lynchburg where there would be more supplies. Grant, however, would continue his pursuit, and as the noose tightened, Lee recognized there was no escape and surrendered on April 9. This letter has been in private hands since offered in an Anderson's Auction sale in 1908 where it was described as “one of the most important historical documents ever offered.” Item 12. Priced at $175,000.

Next is a signed document from a king whose life was cut short, quite literally. King Charles I of England was one of those rare kings to have his head cut off. That would come later. On November 27, 1643, Charles' head was still securely fastened to his body, but he was already in trouble. The English King's authoritarian ways and religious connections did not sit well with many of his subjects. There were all sorts of parties from England, Scotland, and Ireland with their own sets of issues, but too many for Charles' good were united against him. The year earlier, the long-festering conflicts had turned into Civil War, and among the King's many problems was money. He needed more. Item 1 is a document in which Charles “requests” (it's almost a demand) a loan of £50 from Edward Pyle. Charles says that if Pyle does not loan him the money, it will give “cause to suspect your duty and inclination both to Our Person and to the publique peace.” Such strong-arming probably antagonized supporters, though Pyle evidently gave in, after negotiating a better deal. A receipt on the back indicates Charles received only £30. We are not sure of the identity of Pyle, but he may have been the Edward Pyle of the Pyle family that were royalists at the time, and did well again after the Restoration. As to whether the loan was repaid, we would guess not. Conditions, financial and otherwise, did not improve for Charles, and in 1649, he was convicted of treason and his head removed with the stroke of an axe. $2,750.

Here is one of those difficult situations many people face on occasion – you receive a request for a recommendation for someone you would not recommend. What do you? Write a terse recommendation that complies with the request, yet lets the reader see you are less than excited about the person? Or, do you just do the uncomfortable thing and say “no?” T. S. Eliot chose the latter in this 1957 letter. Perhaps it was made a little easier by not having to reply directly to the person seeking the recommendation. A Miss C. von Koschembahr had submitted some poetry to publisher Faber and Faber for a friend, and sought Eliot's recommendation. Eliot had been an editor and later director at the firm. He honestly replies, in declining the request, “I am not really impressed with your unfortunate friend's poems.” He does add that she should contact an American poet, preferably a younger one, as “I should not like the fate of any verse to rest on my decision alone.” Item 9. $800.