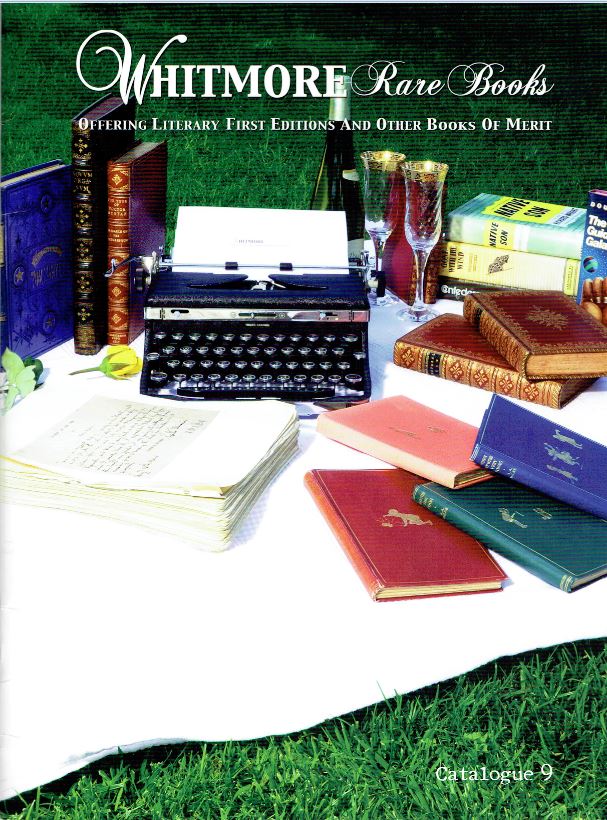 Catalogue 9 has been released by Whitmore Rare Books, “offering literary first editions and other books of merit.” “Literature” describes most of the items offered, though that might be a stretch for a few, such as Dr. Seuss' Cat in the Hat, David Embury's classic Fine Art of Mixing Drinks, or a manuscript appointment of a successor as Lord Chancellor for Sir Francis Bacon when he was put on trial in 1621. In hindsight, he might better have joined the pilgrims, as the great philosopher was convicted of corruption and banned from public office for life. Here are a few more of the books to be found within this ninth catalogue.

Perhaps Bacon felt like “K,” the protagonist in Franz Kafka's The Trial. This is a 1937 first American edition of a book originally published in German in 1925, the year after Kafka died. K goes through surreal proceedings by a court of unknown judges and unknown authority, not even told the charges against him. The charges come to dominate his life as K remains in the dark about what is going on, seeking help from a lawyer and others who seem to know more than he, but not enough to be of much use. A year later, the poor man is taken away and executed. Kafka's masterpiece was never finished. He didn't even want it published. Kafka had written the work 10 years earlier, and left instructions to his literary executor to burn his papers when he died. Fortunately, the executor ignored his wishes and published the book. Item 49. Priced at $4,250.

K was unable to extricate himself from his predicament, but if there is one man who could have escaped from it, or anything else, it would be the one-time owner of this book. Item 45 is a copy of Natural Magick, a 1658 first English language edition of a book by John Baptist Porta, originally published in 1558. Porta was an Italian “scientist,” perhaps a scientist for his era. His work includes legitimate science, along with magic, the occult, alchemy, and just about anything else that crossed the mind of the inquisitive gentleman. This book precedes the era of the scientific method, Porta gathering his “knowledge” wherever he could, from ancient writings to his own observations. This copy of Porta's book is notable for its provenance. It was once owned by the most renown magician ever, Harry Houdini. The master of escapes has signed his name, and made a few notations. Houdini has placed a notation for “INKS” on page 350. This section reveals how to make invisible ink and invisible writing. $22,500.

Kafka wasn't the only author to leave behind an unfinished book. F. Scott Fitzgerald, who had gone six years without a novel, having turned to film scripts for money, was working on another when he died. Fitzgerald's was a tormented life, and years of drink had depleted his health. A couple of heart attacks at the age of 44 finished him off. He had partly finished a novel about the rise to power of a film producer, a subject with which he would have been familiar from his late-in-life work in Hollywood. With help from notes about the unfinished parts, The Last Tycoon was published in 1941, the year after his death. Item 27. $1,250.

Item 64 is a long-forgotten book that was “found” a couple of decades ago, and then swept into the public consciousness with a recent film of the same name, Twelve Years A Slave. Solomon Northup's account of his 12 years on a Louisiana plantation was published in 1853, a year after Uncle Tom's Cabin, quickly selling 30,000 copies to readers seeking a nonfictional account of what slavery was like. Northup was a free black man, a farmer and a violinist from upstate New York when he was enticed to come to Washington, D.C., ostensibly to play the violin. Instead, he was kidnapped, slavery still being legal in the nation's capital, and transported to Louisiana. Control over slaves was such that Northup was unable to get a message to his family back home. He toiled for 12 years on the plantation before convincing an itinerant Canadian carpenter, working temporarily on the plantation, to send letters back to New York. Eventually, Northup was rescued by the son of his father's former owner (from the days slavery was legal in New York) and officials of the State of New York. Northup wrote his book and spoke to abolitionist audiences for the next few years, but in 1857 disappeared again, and no one knows what became of him (it is not believed he was kidnapped into slavery a second time). $8,500.

We will conclude with some much lighter reading, a return to very early childhood. Item 6 may be one of the first books you ever read, or someone read to you. It is Margaret Wise Brown's Goodnight Moon. It could be argued that Clement Hurd's illustrations made this book more than Brown's lyrics, though simple as they are, they were just right for this story. It is as magical as it is simple, and it lights up the eyes of any young child to whom this story is read. I say that from personal experience. This first edition was published in 1947. $650.