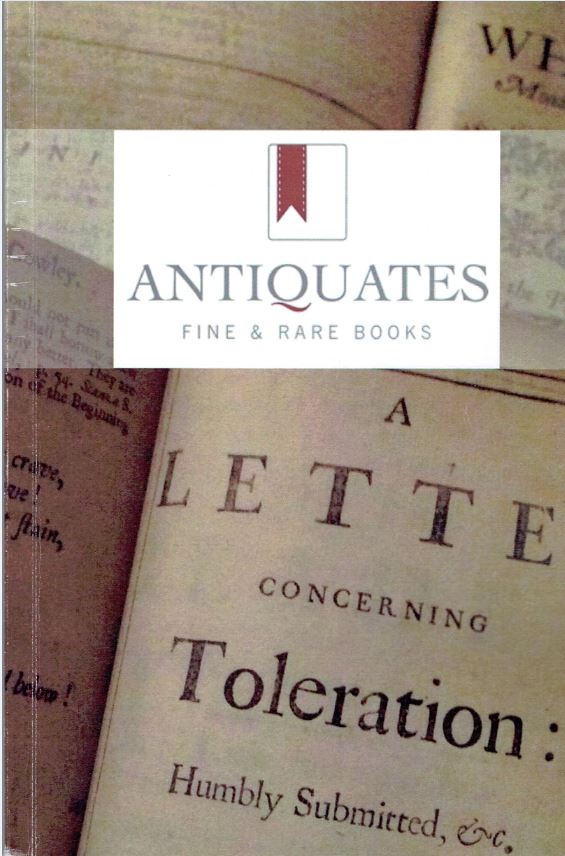 Antiquates Fine & Rare Books has issued their Catalogue 7 – British Authors and Owners. This is home turf for the Dorset County, UK-based bookseller. The material fits their “Antiquates” name well, the greatest concentration being from the 17th and 18th centuries, though some material gives or takes a century. Theology is a major topic of works that go back this far in time, but there is also political, scientific and other such topics to be found, as well as many items in the fields of literature and poetry. Whatever was discussed in Britain long ago may find its way into this catalogues. Here are some samples.

We begin with one of the early and most important of Quaker treatises: An Apology for the Christian Divinity, As the Same is Held Forth, and Preached by the People, Quakers... a first English edition of Robert Barclay's major description of the faith, published in 1678 (a Latin edition was published in Amsterdam two years earlier). Some refer to it as the “Quaker Bible.” It was not easy being a Quaker in England in those days (explaining his first publishing the book in Amsterdam). Barclay spent some time in and out of prison on this account, though he also maintained good relations at times with the Crown, and became Governor of the mostly Quaker-owned American colony of East Jersey, though he never lived there. This copy was owned by John Whiting, and contains his extensive notes. Whiting was another devoted follower who wrote several tracts himself, including the first Quaker bibliography. Whiting was also persecuted and spent much time in jail around the same time that Barclay was persecuted. Friends were able to send Whiting books to read during the time he was in prison, and the timing of his notes indicates that this is one of those books Whiting read while he had lots of spare time on his hands. Item 10. Priced at £1,500 (British pounds, or approximately $2,519 U.S. dollars).

Item 104 is The Poetical Works of Percy Bysshe Shelley. Edited by Mrs Shelley. Mr. Shelley died 1822, the result of a drowning shortly before his 30th birthday. This 4-volume collection was published in 1839. Shelley's reputation had grown during the intervening years, but this anthology secured his recognition as a major poet. Mary Shelley, a writer of great renown today, principally as creator of Frankenstein, was hired to edit his poems. Percy Shelley's father had forbidden the publication of a collected works or biography of his son, but finally relented late in his life. He still prohibited the inclusion of a biography, though Mary managed to sneak some such material in as part of a discussion of his poems. £400 (US $671).

Thomas Jackson does not quite have the same poetical reputation as Shelley, though he certainly was a patriotic Englishman. Item 64 is Jackson's Waterloo, published in 1832. He dedicated his lengthy poem to the Duke of Wellington, and says it was “suggested to the author by feelings awakened on a recent visit to the field of Waterloo.” An appendix lists officers mentioned in the poem, and those who commanded regiments. A contemporary review of the poem from New Monthly Magazine commends the typeface and paper used in the publication, while commenting, they “hope that Thomas Jackson, Esq. has more money than wit.” Not surprisingly, this work is uncommon. £200 (US $335).

Item 36 is The Justice of God Vindicated. A Sermon Prech'd in April 1740, on Occasion of the Condemnation and Execution of William Dolphin at Derby, by Rev. James Christie. Dolphin was a highwayman, and authorities took a dim view of people who stole from others as they traveled between towns. Christie had never heard the one about people who live in glass houses. He was imprisoned in 1738 for bigamy. Seems he was married in 1721, and then married again under a different name in 1730. As Antiquates notes about Rev. Christie, evidently “he was neither imprisoned for long nor afraid of accusations of hypocrisy.” £300 (US $503).

Item 20 is a 1570 edition of the New Testament, in Greek and Latin, with commentary by Matthias Flacius. What makes this copy special is it once belonged to a very good man. Granville Sharp was the son of an Archdeacon, very much interested in studying and discussing the Bible. However, that it not why he is remembered. His brother was a physician who often provided free assistance to the poor, and one day in 1765, he treated a slave who had been horribly beaten by his master and abandoned. His brother helped the man, who needed several months of hospitalization to recover from his injuries. It was a life-changing event for Sharp. He quickly became one of England's earliest and most dedicated abolitionists. He was a tireless worker for the cause, and while he did not live to see slavery abolished, he did get to see one major victory – the abolition of the slave trade. Sharp has signed this copy of the New Testament. £2,500 (US $4,198).