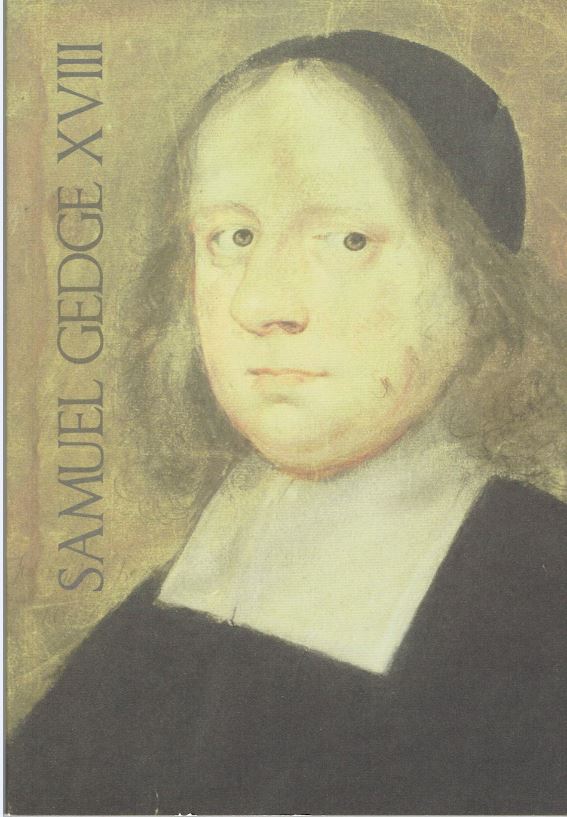 Samuel Gedge Ltd. Rare Books has published their Catalogue XVIII. The use of Roman numerals is appropriate as the works here are mostly very old, back to the days when everyone understood that numeric system. While age is a commonality, the type of material varies greatly. Some items are books, but most are handbills, posters, certificates, letters, more ephemeral pieces. We will take a look at some of these varied items.

We start with the gentleman depicted on the cover of this catalogue. Unfortunately, we can't tell you who he is, or much of anything about him. His garb indicates he was an Anglican clergyman, and most likely his portrait was drawn in 1667 in London. There's no one to ask. Nor can we tell you much more about the artist. His name was T. Thrumpton, and we don't even know what the “T” stood for, though Gedge located a contemporary Thomas Thrumpton who may be the artist. Thrumpton worked in pastels and a few other of his works have survived. This one displays the light coloring he used in most of his drawings. Item 113. Priced at £1,250 (British pounds, or roughly $2,095 in U.S. currency).

Sometimes too much independent thought isn't good for you. Item 123 is Amphitheatrum Aeternae Providentiae Divino-Magicum, by Lucilio Vanini. Vanini was an Italian who studied philosophy and theology in Rome, later learning science and medicine. He was ordained a priest, but many found his unorthodox views anti-Christian. He renounced the priesthood and fled to England. Unfortunately, he was jailed there, and returned to the continent, settling in France. He taught in France, propagating his view that worldly phenomena are controlled by natural law, not Godly intervention. That was stretching the acceptable at that time, so he published this book in 1615 to demonstrate he was not an atheist. It bought him time, but in 1618 he was arrested, put on trial, convicted, and sentenced to having his tongue cut out and strangled at the stake, his body to be burnt to ashes. The sentence was carried out. People had a different idea of what God wanted them to do back then. £2,500 (US $4,190).

Next up is a handbill for a Challenge...Mr. Courtney, the American phenomena...that he intends taking a most terrific flight, from the top of the Heights over the town of Dover, and a make a descent on the Ropewalk...30th of August, 1825... Mr. Courtney was a tightrope walker who performed numerous outdoor feats at this time in Dover. However, he may not have been all that he claimed to be. According to The Literary Chronicle for the year 1825, “A Mr. Courtney, who has been unmercifully set upon by the daily journals, because he announced himself as the American phenomena, and who, we believe, is a son of the late John George Holman the comedian, has been flying over the town of Dover, at the hazard of his own life...” £450 (US $754).

Item 92 provides a small slice of life, or more accurately, of death over 500 years ago. This is the will of William Benet of Moulsford, Berkshire, long forgotten to history. Sick in body and whole in mind, he drew up his will on March 4, 1444. He didn't have a whole lot, though undoubtedly more than the average person of his time. He leaves his body to be buried at the church in Cholsey. He gives the church a peck of barley, and two loads of coal to repair its bells. His daughter is left 16 loads of coal, two sons a peck of barley each. The third son gets his pasture land, but not until his wife passes on. £450 (US $754).

Item 129 is an amazing collection of name dropping. It is the visitors book from July 13, 1818, to January 1, 1822, of the Duke of Clarence. Most were likely signed by the named persons, though one person may have signed for a family, or some servant for a visitor on occasion. They were visitors to the Duke's home in Teddington. No one expected too much of the Duke of Clarence. He was the third son of George III. At the start of this period, George III was still living, though no longer mentally competent. In 1820, he died, and the Duke's eldest brother ascended to the crown as George IV. However, his second eldest brother died in 1827 and George IV in 1830. Neither had legitimate issue. The Duke of Clarence became King, where he ruled as William IV until his death in 1837. Price on request.