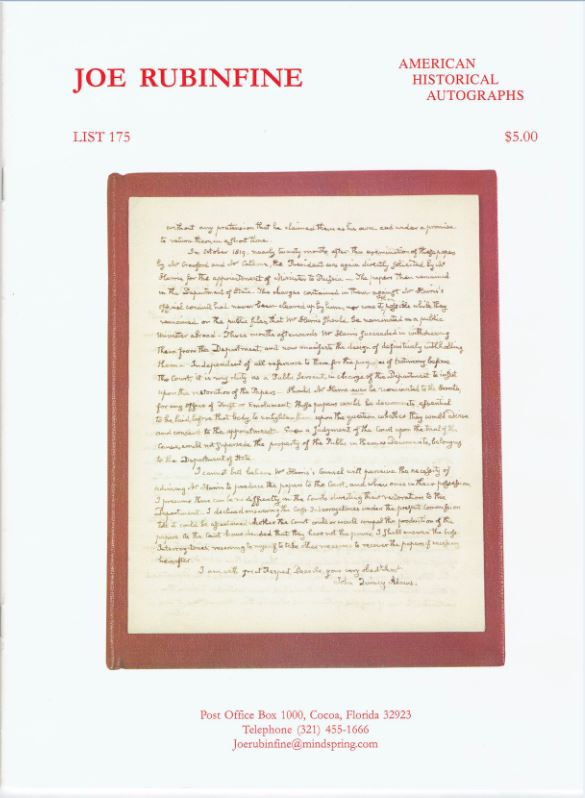 Americans A to Z.

Joe Rubinfine American Historical Autographs has issued List 175 Autographs Adams to Zollicoffer. America includes Central America, Mexico specifically, as Benito Juarez, Francisco Madero, and others make their appearance. Otherwise, it is United States of America, with many important figures, primarily political, to be found. Heading up those political personalities are most of the U.S. Presidents.

As for Adams and Zollicoffer, of the former, you might ask which one, of the latter, “who?” The Adams is John Quincy, a lengthy letter written while he was President-elect. There are also several letters back home to Mom and Dad from Thomas B. Adams. Thomas was the younger son of John Adams, brother of John Quincy Adams. As for Zollicoffer, he is Felix Zollicoffer, a Confederate general killed during the Civil War. These are are a few more signatures to be found in this catalogue.

Here is a chance to obtain most of those presidential autographs all at once. In 1907, the legendary Boston bookseller, Charles Goodspeed, compiled a collection of presidential signatures. He created an album of full velum with a red leather spine, added decorations and tissue guards, included portraits of the presidents, and printed up a title page. It included everyone who had served as President up to that time. There were the great – Washington, Lincoln, Theodore Roosevelt; the obscure – Van Buren, Arthur, Benjamin Harrison; the despised – Tyler, Pierce, Buchanan, Andrew Johnson; the accidental – Tyler, Arthur and Johnson again; and those who didn't live long enough to leave their mark – William Henry Harrison, Taylor, and Garfield. Some signatures are on documents, others on franking envelopes or by themselves. W. H. Harrison's is on a check. A total of 27 presidents are represented. Evidently, Goodspeed or someone continued the collection after it was dated in 1907 as it includes the two following presidents – Taft and Wilson. Item 39. Priced at $25,000.

Speaking of President Taft, William Howard had received an invitation which he had overlooked as a result of all the congratulatory messages he received after his election victory in 1908. Although he has missed the event, Taft does respond, “I thank you for the honor of the invitation, and I...hope that you had a very successful meeting.” Honor? I am not so sure this invitation was an honor. It was to the annual meeting and banquet of the New England Fat Men's Club. Did they really need to sponsor a banquet? Taft would not have qualified, but only because he wasn't a New Englander. The fat man's requirement he met. Taft was, and still is, the heaviest man to serve in the White House, weighing in at a hefty 300-plus pounds. Item 44. $750.

This next signer was technically French, but Americans claim him too. It was written by the Marquis de Lafayette, the young French officer who came to America to help the locals gain their freedom during the Revolution. After the war, he returned home, but soon made a couple of visits. Item 26 is a letter he wrote to his mentor, George Washington, on August 10, 1784. It is written from Philadelphia, and Lafayette writes Washington that he is coming to visit him in Mount Vernon. Lafayette is filled with the flowery prose one would expect from a Frenchman, though it certainly would have been sincere considering his admiration for Washington. He writes, “I hope at last to be Blessed with the sight of My dear General – there is no Rest for me Untill I get to mount Vernon – I long for the pleasure to embrace you...the Happiness of being once more with you will be so great that no Words can Ever Express it...” He goes on to add that “I am not just turning a phrase” when he says Washington is even greater in retirement than he was during the Revolution. This man had a way with words. Lafayette would visit with Washington one more time that fall, but after that he returned to France and never saw him again. Lafayette would not return to America until a farewell visit in 1824, 25 years after Washington died. $22,000.

Like all great presidents, they have to start by first winning the office. Abraham Lincoln was well aware of this necessity. On July 23, 1860, as he sought the presidency, he wrote this letter to Caleb B. Smith of Indiana: “From present appearances we might succeed in the general result without Indiana, but with it, failure is scarcely possible. Therefore, put in your best efforts.” Presumably, he did, as Lincoln carried Indiana and Smith was appointed Secretary of the Interior. Item 30. $30,000.

Theodore and Franklin Roosevelt were only distant cousins, but their families were intertwined, especially when Franklin married Theodore's niece, Eleanor. Item 40 is a letter he wrote to Theodore's nephew, Theodore Robinson, concerning his appointment as Assistant Secretary of the Navy. Both Theodore Roosevelt and Franklin had held that position early in their careers. In this 1924 letter, Franklin congratulates Robinson, says he is 100% sure he will do well, but adds, “There are lots of angles at the navy which I should like to tell you about – things that do not appear on the surface. Do run in some day & we can have a chat.” He also says he is pleased to see Robinson in the post “which I hated to see filled by our mutual relative...” He is not here referring to Theodore Roosevelt, but Theodore Roosevelt Jr., a fourth member of the family to hold this post. While Franklin admired Theodore Jr.'s father, he did not get along with the son. Theodore Jr. was tangentially connected to the Teapot Dome Scandal while serving as Assistant Secretary. Franklin opposed Ted. Jr. when he ran for New York Governor in 1924, and Ted returned the favor when Franklin sought the presidency in 1932. Item 40. $1,500.

Many years earlier, President Theodore Roosevelt also wrote to “Teddie” Robinson. He was getting married at the time (1902), and Roosevelt provides some advice. He describes the importance of truly and deeply loving each other in marriage. Roosevelt says he believes only in “love matches,” and disbelieves in any other type - “at any rate until people have passed the age when they can expect to make love matches.” Roosevelt concludes with a P.S.: “I send you this by typewriting because I am in bed on account of the after effects of the trolley car accident.” The President had been injured when his horse-drawn carriage was struck by a trolley, an accident which claimed the life of a Secret Service Agent. Item 42. $2,500.