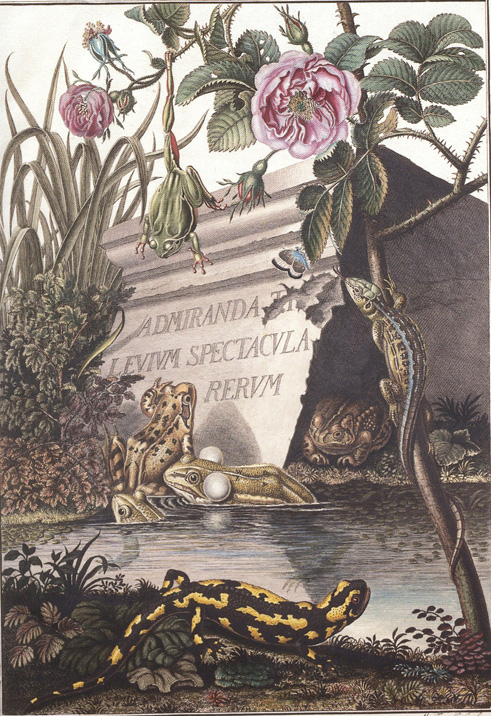 Roesel von Rosenhof's work on frogs is one of the many beautifully illustrated books offered.


Here is a book that is positively mesmerizing: Memoire sur la decouverte du magnetisme animal, by Franz Mesmer. The "mesmerize" comes from Franz Mesmer, but he called the phenomenon "animal magnetism." Mesmer believed that there was a magnetic force that could be used to effect human behavior. Apparently what he was really dealing with was hypnotism, which can indeed induce people to act in unusual ways. King Louis XVI (the same Louis mentioned in the previous item) set up a committee including American representative Benjamin Franklin, to study the phenomenon. They condemned the theory, but it didn't matter, as Mesmer's fame spread throughout Europe. Item 126 is the first publication of his ideas, from 1779. ?6,000.

A remarkable, yet sadly forgotten man was the author of this next book. Jean Henry Dunant was a Swiss banker who happened to witness the suffering that resulted from the battle of Solferino in 1859 during the Franco-Prussian War. He was moved to write this book, Un souvenir de Solferino, which called for the declaration that wounded soldiers were neutral parties, and the creation of a society which would provide aid to them. This call would lead to the Geneva Convention of 1864, which recognized the duty of warring nations to care for the wounded soldiers of their enemies. This in turn led to the creation of the organization which would assist this process, the Red Cross. Sadly, Dunant's focus on his humanitarian aims distracted him from his personal businesses, which would soon go broke. He would spend most of the rest of his life, which lasted until 1910, in poverty, obscurity, and the last two decades, in ill health. However, he would occasionally receive some of the recognition he deserved, most notably in 1901, when he shared the first Nobel Peace Prize ever awarded. Item 177 is the rare limited edition published in 1862 for distribution to Dunant's friends. ?16,500.

Item 323 is an interesting collection of rare European Americana. It is a bound collection of six articles about the "Societe de Fraternity," better known as the Icarian Society. They were written by society founder Etienne Cabet or his follower Louis Krolikowski. This was a utopian society, formed in France, which purchased land in Texas to set up their commune. The members left for Texas in 1848, but conditions there proved inhospitable for the idealistic community. As a result, they upped and moved to Nauvoo, Illinois, where they purchased the property formerly held by the Mormons, who themselves had recently moved to Utah. The Icarians, unlike their Mormon predecessors, managed to establish good relations with the local community, but hard times led to their breaking into conflicts among themselves. Cabet and his closest followers would be forcibly removed from the commune in 1856, but two years later, the community itself would fold. The six items herein offered are from 1849-1851, and some concern conflicts Cabet had with the French government, which thought he had fraudulently obtained funds to support the community. ?14,500.

Many of the books in this catalogue come with beautiful illustrations. Item 220 is Historia naturalis ranarum....by August Roesel von Rosenhof, a work on German frogs and toads. See the image accompanying this article. ?28,620.