A Spring Collection from Asher Rare Books and the Antiquariaat Forum 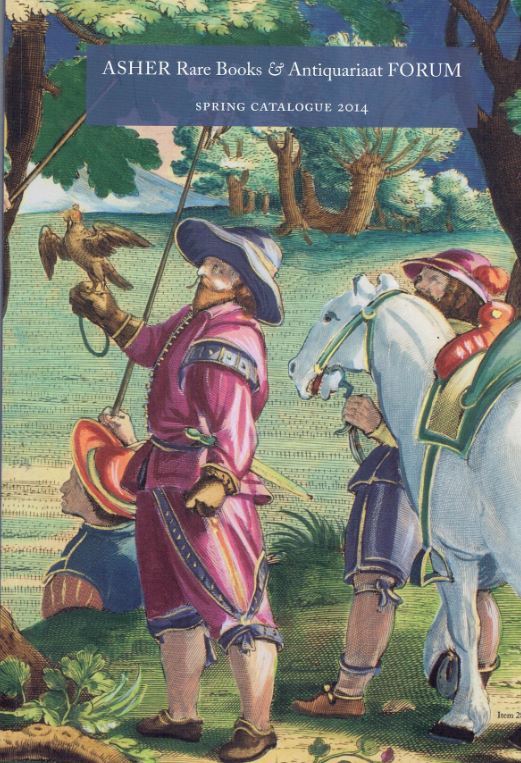 A wide selection for spring.

Asher Rare Books and the Antiquariaat Forum have issued a joint catalogue – Spring Catalogue 2014. They offer a wide variety of antiquarian material. We will use their description of what can be found:  Atlases, Autographs, Books, Drawings, Manuscripts, Maps, Print Series and Views, Covering:  Art & Architecture, Cartography & Geography, Exploration & Travel, History, Literature, Natural History, Photography, Religion, Science & Medicine. In other words, virtually anything might be found in this selection. Here are a few of the items.

All of our names are proper nouns, but this writer’s name has also become an improper noun. Giacomo Casanova was an 18th century Venetian, a man who held numerous jobs, managed to gather the support of several wealthy individuals when he needed financial assistance, but mostly is known for his romantic liaisons. Late in life, he wrote an autobiography recalling them, sealing his place in history, and his name as a word for a scandalously romantic individual. While a native of Venice, a place he loved, his behavior, with women, political  and church leaders, got him into repeated trouble, and he was forced into exile several times. Such happened to him again in 1783. Still he was able to get a job with Venice’s ambassador to Vienna, a position he held until the ambassador died in 1785. It was during this period that he wrote several pamphlets pertaining to a commercial fraud perpetrated by the Venetian Zannovich brothers against some Dutch merchants. The Netherlands was displeased that Venice took no action against them and suspected a Venetian diplomat was involved. Ambassador Marco Foscarini took on the task of mounting Venice’s defense, and Casanova wrote a series of pamphlets in 1784 and 1785 claiming that Venice’s diplomat was also an ignorant victim of the bothers’ fraud. Item 48 is one of Casanova’s pamphlets, issued in 1785:  Esposizione ragionata della contestazione… Priced at €7,500 (euros, or roughly $10,412 U.S. dollars).

Here is a proposal over two centuries old that was never fulfilled, but is under consideration once again today:  Memoire sur un nouveau passage de la Mer du Nord a la Mer du Sud. That translates to proposing a passage from the North Sea (Atlantic Ocean) to the South Sea (Pacific Ocean). The year was 1791, over a century before construction of the Panama Canal. Martin de la Bastide saw the need for such a passageway, but his route, as was most others prior to the authorization to build the Panama Canal, went through Nicaragua. That route is longer, but takes advantage of some existing waterways, the San Juan River and Lake Nicaragua. While Bastide’s proposal was not taken up, the Americans signed several contracts to proceed on his plan during the 19th century, which fell through, before taking up the Panama route. Recently, a wealthy Chinese businessman, likely with the support of the Chinese government, has proposed to finance such a route through Nicaragua, building a deeper and wider canal than the one which runs through Panama. Item 13. €12,500 (US $17,347).

The major issue of the 19th century in the United States was that of slavery, eventually requiring a bloody civil war to end it. The British dealt with it earlier, and in a much more peaceful manner. England had the advantage of not employing the practice at home, though it used it in its colonies, leaving America that terrible legacy once it achieved independence. Item 230 is a collection of 17 acts of parliament concerning slavery. The British were able to take steps to gradually eliminate the practice, steps the Americans were unable to take. The first pamphlet comes from 1793, and it mandated humane conditions on slave ships, where conditions were horrific and many died on the journey to the West Indies. The final pamphlet, from 1833, records the abolition of slavery throughout most of the British Empire (a few exceptions were finally terminated in 1843). €5,000 (US $6,938).

The Reformation was well over a century old in 1695, around the time Dutch artist Cornelis Dusart created these drawings of French Catholic clergy under Louis XIV. Evidently Dusart couldn’t let go of his anger. Item 46 is Renversement de la morale chretienne par les desordres du monachisme…  (reversal of Christian morals by monastic disorders). This is a collection of caricatures of Catholic clergy, with accompanying text in both French and Dutch so people of both nations can appreciate the sentiments. The caricatures are truly ugly, displaying clergy “indulging in drunkenness, greed, lust, idolatry, gluttony, etc.” The frontispiece, attributed to the notable Dutch illustrator and caricaturist Romeyn de Hooghe, shows “clerics torturing Christ, who is bleeding coins from his Holy Wounds.” €3,750 (US $5,203).