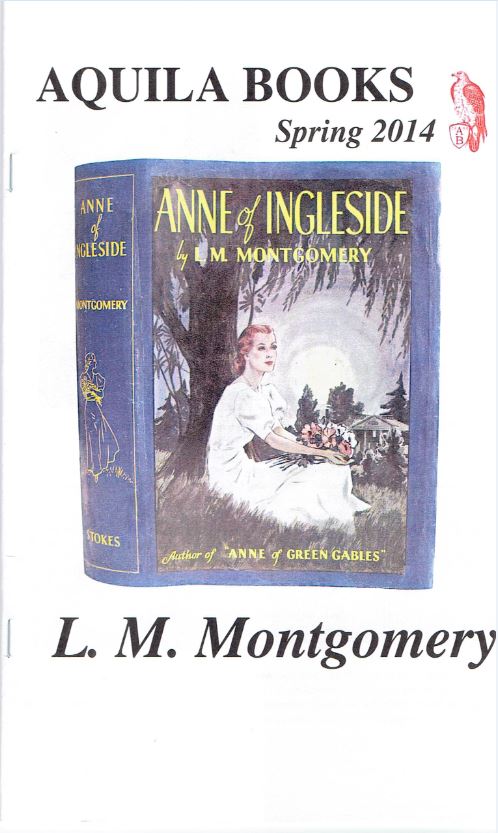 Aquila Books has released a catalogue of material relating to L. M. Montgomery. That was the name Lucy Maud Montgomery used on her books. Aquila usually focuses on Canadiana and material from the polar regions. This one is atypical, and yet not unrelated as Montgomery was a Canadian author. Her novels were mostly set in Prince Edward Island, where she lived for a substantial portion of her life. The settings of her life and her novels remain one of the island's major tourist draws today, though Montgomery died in 1942. Her popularity remains undiminished.

Lucy Maud Montgomery is best known for her novel Anne of Green Gables, and the series of “Anne” books that followed it. Anne is a precocious orphan girl who is sent to an older couple who work a farm. They had requested a boy, figuring they needed help on the farm, but were given a girl in error. They plan to send her back, but decide they can do the best job of raising the red-haired 11-year-old. The book traces her life at the home known as “Green Gables” in the town of “Avonlea” on Prince Edward Island. Her adventures as she grows up became quickly popular with both young and adult readers, turning the obscure Montgomery into a very successful writer. Anne became so popular that Montgomery continued to write about her – a series that eventually ran to 8 novels. The novels were not released in chronological order, as Montgomery occasionally went back to fill in, but by the last in time Anne has passed the age of 50 and the focus was on the lives of her children.

Montgomery wrote many works not related to Anne, hundreds of short stories and poems, and other novel series. She even wrote one piece of nonfiction. Still, it will always be Anne with which her name is most closely associated. Here are a few of the items related to L. M. Montgomery Aquila is offering.

While not her first creation (Montgomery had previously written many short stories and poems), there is really no other place to start than Anne of Green Gables, the first edition, first impression, dated April 1908. Her career was essentially cemented with this one book. This first edition came in three variants of color of the cloth binding, in no known priority. Item 3 is a copy in the chocolate colored binding, item 4 in the tan binding. Each is priced at CA $17,500 (Canadian dollars, or approximately 10% less in U.S. dollars).

With the success of Anne, Montgomery followed up the next year with Anne of Avonlea. Anne Shirley is now aged 16-18, old enough to be the schoolteacher in her hometown of Avonlea. They grew up fast then. Item 11 is a first edition, first impression of the second “Anne” book. $800.

In 1921, six “Anne” books later, Montgomery determined it was time to move on. She did not write another “Anne” book for 15 years. When she returned to the saga, and she did twice, she filled in gaps in Anne's age, rather than going later in life. By 1921, Anne had already surpassed 50 and Montgomery evidently did not want to recount her adventures as a senior citizen. In this next book, published in 1936, Anne had returned to her low 20's. The book came out under two titles. Item 63 is the first American edition of Anne of Windy Poplars. The first American and first Canadian were issued simultaneously. Item 64 is the first U.K. edition of Anne of Windy Willows. Why the difference? Did Montgomery believe willows were more popular in England, and poplars in North America? Actually, not. She wanted the title to be “willows,” which sounds better, but the American publisher insisted the name be changed because it sounded too close to “Wind in the Willows.” Montgomery was forced to consent. Obviously, the British were not concerned. Each title is priced at $350.

Item 67 is the last “Anne” book, published in 1939:  Anne of Ingleside. It is the one depicted on the cover of this catalogue. It was released in 1939, with Anne now in her 30's. This is a first Canadian edition with the book apparently being released simultaneously in several countries. $1,950.

Montgomery wrote one nonfiction book, co-wrote actually, with Marian Keith and Mabel Burns McKinley. The title is Courageous Women. It tells the stories of some notable Canadian women. The book was published only in Canada. This is a first edition from 1934. $350.

This next item Aquila describes as “the black tulip of a Montgomery collection.” It is a pamphlet of “Poems,” evidently printed in 1903. It is tied together with string. The pamphlet is inscribed by Montgomery and says “Xmas 02,” or 03. Since some of the poems weren't published elsewhere until 1903 it seems that what looks like an 02 may be an 03. Only three copies of this collection are known, but the other two are defective. What makes this publication particularly notable, beyond its extreme rarity, is that it is Montgomery's first separately published work. Item 1. $30,000.